England is not blessed with an abundance of surviving Anglo-Saxon buildings. There is good reason for this scarcity; the Anglo-Saxon period was one beset by frequent warfare and violent invasions, particularly by the Vikings in the period 800-950.

These invaders, quite naturally, burned and destroyed most of the settlements they came across, in their search for plunder and martial glory. For this reason most surviving examples of Anglo-Saxon architecture date from either 600-725 or 900-1050. 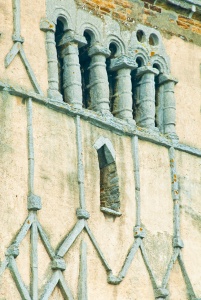 Unfortunately for posterity, most Saxon buildings were constructed of wood with wattle and daub walls. The depredations of the Danes left very few of these flammable buildings standing. The only buildings the Anglo-Saxons tended to build in more permanent stone were their monasteries and churches. Here, at least, there are several good examples remaining to see today. (See our in-depth article on Anglo-Saxon churches.

There are two regions where the earliest Saxon work is concentrated; in the southeast around the county of Kent and in Northumberland. In Kent, the best surviving churches are those of St. Peter and St Paul, Canterbury (c. 600), and St Peter-on-the-Wall, Bradwell (c. 660). These churches are heavily influenced by the Roman basilican tradition, with a rounded chancel in the east and plain walls.

In the north the Celtic churches at Escomb, County Durham (c. 690) and the monastic buildings at Monkwearmouth and Jarrow, Tyne and Wear (c. 675). These buildings betray their Celtic origins, with tall, aisless naves and a rectangular chancel. After the Synod of Whitby (664) swung the pendulum of power towards Roman Christian observance, the northern churches took up the basilican plan, as in the crypt at Hexham, Northumberland (674).

One other early Saxon building of note is the church at Brixworth, Northamptonshire (c.676). Interestingly, it was built re-using old Roman bricks. It is also unusual for its length; at nearly 100 feet long Brixworth is large compared to other early Saxon churches.

Surprisingly few large churches remain from the later period of Saxon building (900-1050). The larger buildings, particularly the monasteries, were generally rebuilt in the Norman period, and little Saxon work remains above ground. The smaller churches are extremely simple in layout; basically a simple nave divided from a rectangular chancel by a narrow arch. Examples include St. Laurence, Bradford-on-Avon, and Boarhunt, Hampshire. 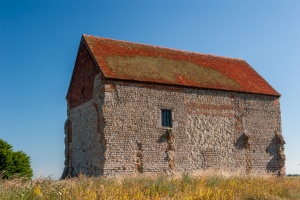 Saxon churches are generally small in scale, showing none of the inclination towards grandeur exhibited by the later Norman builders. Doors and window openings are extremely simple, with very few decorative elements. Though some windows are low triangles (see drawing), more often they are narrow slit openings with a simple rounded top. When the openings were larger they were often supported on short pillars of plain stone or simple balusters.

The chancel and nave are small, rectangular enclosures, almost cut off from each other. This separation may have been a conscious choice, keeping the mystery of the chancel shrine apart from the riff-raff in the nave, but it is just as likely that the Anglo-Saxon building techniques would not permit a more expansive structural opening.

The Anglo-Saxon's put a lot of energy into tower building in their church architecture, and often Saxon towers are the earliest surviving part of English parish churches. The towers began as a defensive structure; they enabled inhabitants of a village to gain a high lookout point and an easily defensible position to ward off attacks. Saxon towers often had rooms high up which were reached by a ladder. The ladder could then be drawn up when danger threatened.

One characteristic of Anglo-Saxon stonework should be noted; they often used long strips of vertical stone, called "pilaster strips", in the exterior walls of their churches. Often these stones form a simple criss-cross pattern.

The Saxons frequently used alternate horizontal and vertical stones at the corners of buildings. This pattern, sometimes called "long-and-short work", is easily distinguished from the more common Norman pattern of alternating horizontal stones. 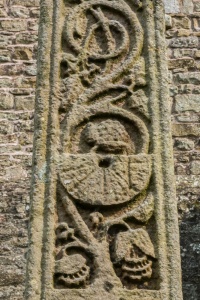 Another common Anglo-Saxon element, particularly in the north, is the stone cross. These crosses were often used to mark points where paths intersected, though they were later used as a gathering place for religious observance.

Crosses may have been put up at sites which were already regarded as sacred in pagan worship. Later on, churches were built at the same spots, preserving a continuity of worship. Some of the finest crosses still to be seen are at Ilkley (West Yorkshire), Bewcastle, Gosforth, and Irton (Cumbria), and Bakewell (Derbyshire).

Although there are local variations in cross design, the circle cross, like that at Dearham, Cumbria, was a widely used pattern. In a circle cross the arms of a stone cross extend just to, or slightly beyond, a circle of protective stone. Similar circle crosses can be found in other places with strong Celtic traditions; in Wales and Ireland.

The patterns incised on the surface of crosses show elements of both Christian and pagan worship, from Biblical figures to elaborate scrolls of leaves and vines, as at Bewcastle. 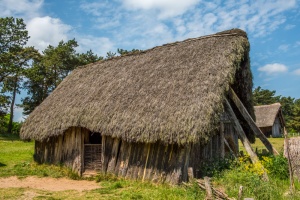 As mentioned above, most domestic structures in the Saxon period were built in wood. Even the halls of nobles were simple affairs, with a central fire and a hole in the roof to let the smoke escape. Even the largest buildings rarely had more than one floor, and one room. Even the best archaeological remains of domestic buildings from the Anglo-Saxon period offer little more than post holes to view, which indicate the size of the hall, but little more.

Buildings vary widely in size, from 10 x 12 ft to as much as 75 x 260 feet. Most are square or rectangular, though some round houses have been found. Frequently these buildings have sunken floors; a shallow pit over which a plank floor was suspended.

The pit may have been used for storage, but more likely was filled with straw for winter insulation. A variation on the sunken floor design is found in towns, where the "basement" may be as deep as 9 feet, suggesting a storage or work area below a suspended floor.

Another common design was simple post framing, with heavy posts set directly into the ground, supporting the roof. The space between the posts was filled in with wattle and daub, or occasionally, planks.

The floors were generally packed earth, though planks were sometimes used. Cruck framing, where two large timbers are bent together to form a peak, was also used, though this technique became much more common in the Norman period.

Roofing materials varied, with thatch being the most common, though turf and even wooden shingles were also used.

Windows were rare, but when they were used they would have been covered with thin animal skins to allow light to penetrate. Some evidence suggests that glazing was not unknown in the late Saxon period.