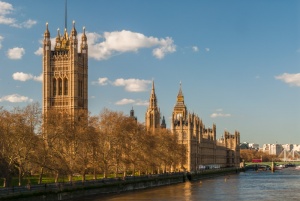 Augustus Welby Pugin has been called the foremost British architect of the 19th century. Pugin was born on March 1, 1812, in Bloomsbury, London. His father Auguste, was a member of the French aristocracy who had thought it prudent to flee France during the Revolution.

From his father, Augustus learned a profound love of medieval Gothic architecture. The elder Pugin often took his son on tours abroad, during which time he studied architectural style and design. Although Pugin was enrolled at Christ's Hospital School in London, it is doubtful whether he ever received a formal education.

The elder Pugin worked as an artist and draughtsman, eventually becoming the chief draughtsman for prominent architect John Nash. Augustus helped his father create a series of wonderfully detailed and exact drawings providing details of medieval Gothic architecture and decoration.

So influential were the Pugin drawings (and so well-connected his patrons), that at the tender age of 19 he was employed to design furniture for Windsor Castle. Soon he started his own business, carving architectural decoration in Gothic style.

In the meantime Pugin converted to Roman Catholicism, a conversion which left him filled with a fervent desire to express his faith through architecture. He came to regard the period of 1280-1340 (the "Second Pointed Period" as it was called in the Victorian age), as the apex of human history, when people expressed their faith through the creative arts.

He abhorred the work of James Wyatt and his early 19th century contemporaries, who merely copied the form of Gothic style, but used inferior materials or supported their work with iron. In support of his arguments in favour of authentic Gothic, Pugin produced his master work, Contrasts, A Parallel between the Noble Edifices of the 14th and 15th centuries and Similar buildings of the Present Day. Showing a Decay of Taste (1836).

Pugin followed Contrasts with other books, developing his arguments in favour of Gothic purity. The True Principles of Pointed or Christian Architecture (1841), and The Glossary of Ecclesiastical Ornament (1844), were among the most widely read.

The success of Contrasts and his subsequent works brought Pugin a number of architectural commissions, notably at Southwark Cathedral. Other churches where Pugin had a hand in design - or redesign - include St. Chad's (The Roman Catholic Cathedral of Birmingham), St. Marie, Derby, and St. Oswald, Liverpool.

Pugin was involved in more than ecclesiastical architecture. He worked on the interior of Chirk Castle, at Bilton Grange, Warwickshire, and at Scarisbrook Hall, Lancashire. He designed ornamental and decorative architectural details as diverse as wallpaper, tiles, furniture, stained glass, and gargoyles.

One building stands above all others as a testament to Pugin's influence, however. The Palace of Westminster (i.e. The Houses of Parliament) in London, was built under the direction of Sir Charles Barry, but Pugin was responsible for the every aspect of the interiors, as well as for creating working drawings of all the exterior details.

In 1844 Pugin built a home for himself in Ramsgate, Kent, overlooking the sea. From the library of this rather severe house, called The Grange, Pugin did most of his work.

Architecture did not take up his entire attention at The Grange; from the tower of the house Pugin would watch for ships aground off the Goodwin Sands. He would put out in his wrecker, The Caroline, to rescue the ships and cargo. The salvage money he gained from these rescues brought him a tidy supplement to his income from architecture.

In 1851 Pugin was hard at work on the Medieval Court for the Great Exhibition (the Crystal Palace), but a lifetime of ceaseless work took its toll. Pugin suffered a breakdown from exhaustion and spent time in a private asylum before he finally died at his home in Ramsgate on 14th September 1852.

Pugin's legacy extends far beyond his own architectural designs. He was responsible for popularizing a style and philosophy of architecture that reached into every corner of Victorian life. He influence writers like John Ruskin, and designers like William Morris. His ideas were expressed in private and public architecture and art throughout Great Britain and beyond.

The St Mary's Church, Derby website has an interesting section on Pugin's work.

This Christian missionery served as the first Archbishop of Canterbury

This queen was married at 11 to the Holy Roman Emperor, Henry V


She was the daughter of Henry I

She fought for the throne with Stephen