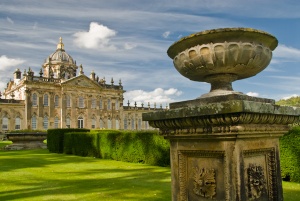 Many country house architects in England had emulators, those who copied the style of the original. Not too many people successfully copied John Vanbrugh; in today's parlance he was a one-off.

John Vanbrugh was of Flemish background, the grandson of a Haarlem merchant named van Brugg. John was born in London, the 4th child of Giles Vanbrugh, a cloth-merchant. He was raised in Chester after his family fled London in the wake of the Great Fire and Plague. His father later worked in the sugar trade, possibly owning a sugar import business, though this is unclear.

What is clear, though, is that like Wren before him, Vanbrugh came to architecture late in life; he began an army career in 1686 and served for a time in France. In fact, you could twist that previous phrase and say that he served time in France, for he was imprisoned in the Bastille for a time on a charge of espionage.

He returned to England in 1692, still in the army, but sometime in the next several years he must have resigned his commission, for we next see him as a playwright, at which profession he enjoyed success with works like The Relapse (1696) and The Provoked Wife (1697). both of which are still performed. His plays offended some sections of society by their licentiousness, but also because he promoted equal rights for women in marriage.

His Whig political leanings brought him into contact with leading political and social figures in London society, helped by his membership in the popular Kit-Kat Club, where many leading Whig nobles and figures in the arts gathered. 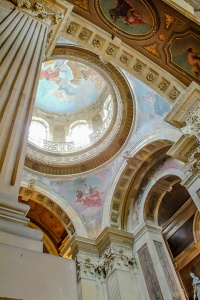 The great dome of
Castle Howard

Vanbrugh entered the profession of architect in grand style. There was no hint here of serving years of tedious apprenticeship, working your way to the top and gradually gaining aristocratic patrons. No, Vanbrugh entered his new profession at the top. Through his work as a playwright Vanbrugh met some of the leading lights of London society, among them the Earl of Carlisle, who must have been impressed by the playwright's view on the world.

How impressed? Well, in 1699 the Earl commissioned the untried Vanbrugh to design his grandiose new Baroque mansion at Castle Howard, in Yorkshire. As a first commission, it could hardly have been more impressive, not could the Earl have quite imagined the extraordinary result.

As a neophyte architect, Vanbrugh must have realised that he needed help. He called on Nicholas Hawksmoor, who had worked with Sir Christopher Wren and was himself one of the finest architects in late 17th century England.

Hawksmoor's skills as a draftsman made it possible to realise Vanbrugh's vision, but the essence of that vision was entirely Vanbrugh's. In one swoop he made himself the pre-eminent name in English Baroque architecture, eagerly sought after by those with enough money to spend lavishly on this newly popular style. 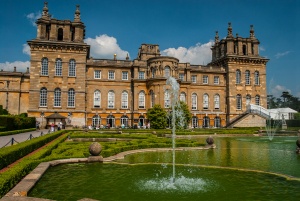 What made his designs at Castle Howard so innovative? Until that point most grand architecture was composed of separate building blocks, but at Castle Howard Vanbrugh grouped buildings together and used all three dimensions to create grandiose monuments with gradations of light and shadow, rather than just seeing a building as a two-dimensional facade. His Flemish background encouraged him to create a style as yet unseen in England, and it was a sensation.

The centrepiece of the new mansion was an extraordinary drum and cupola, with Corinthian pilasters supporting the drum. Standing under the great dome and craning your neck to look up is one of the most awe-inspiring experiences you will encounter at any English stately home.

The popularity of his work at Castle Howard led to Vanbrugh's most famous (or infamous) creation, Blenheim Palace, at Woodstock, Oxfordshire. Blenheim was a gift from the nation to the Duke of Marlborough for his military success in the War of the Spanish Succession. Blenheim was made for show, to awe and inspire, with scarcely any concession to comfort or actually living in the house. It was one of the last great houses to be designed in the grand manner, without consideration for cost or size. It was a concept that could not last, but the legacy of Vanbrugh's work is arguably the greatest showpiece house in Britain. 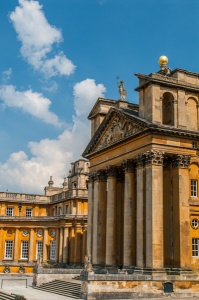 The Blenheim commission was anything but easy, though, Vanbrugh's client was Sarah, Duchess of Marlborough, who made no secret of the fact that Vanbrugh was not her choice as an architect, but the money was provided by the royal treasury. After Sarah eventually fell out with Queen Anne, payments ceased, and so, as a consequence did construction work on the palace.

Work only restarted in 1716 when George I came to power, but relations between Vanbrugh and the Duchess were so bad that the architect was barred from the building site. When the Duke of Marlborough died in 1722 it was Vanbrugh's former assistant, Nicholas Hawksmoor, who returned to finish the job.

Vanbrugh's social standing rose with the popularity of his work at Castle Howard. In 1702 he was appointed Comptroller of the King's Works (essentially an official royal architect), and in 1703 he was named a Governor of Greenwich Hospital, where he took a hand in design and construction. Vanbrugh became a herald in 1704 and was knighted in 1714. In that same year he took over from Wren as Surveyor at Greenwich, and oversaw the Great Hall and William III building.

In 1719 he married Henrietta Yarborough of Heslington Hall, Yorkshire. At the time of the marriage Henrietta was aged 26 and Vanbrugh was 55. By all accounts, the marriage was a happy one, and they had 2 sons together. Unlike the scandalous behaviour portrayed by characters in his plays, Vanbrugh seems to have led a sedate, untroubled personal life.

Vanbrugh's final great country house was Seaton Delaval Hall in Northumberland. This was built over the years 1720-1728. Much smaller and personal was his own house, dubbed Vanbrugh Castle, at Greenwich. This remarkable house in the style of a Scottish tower house was begun in 1718 and resembles a Baroque fantasy castle, with turrets and crenellations. It is now divided into individual flats.

In 1725 he returned to Castle Howard for one of his last works, the Temple of the Four Winds, inspired by Palladio's Villa Capra near Vicenza. He died the year after the temple was finished, possibly after an asthmatic attack. He is buried in an unmarked vault near the altar of St Stephen Walbrook, London.

Vanbrugh's 'corpus' was not large, certainly not large compared to contemporaries like Wren and Hawksmoor, but his influence was enormous. He almost single-handedly popularised an ornate, effusive Baroque style in country house architecture. The popularity of that style was short-lived; it was soon superseded by marginally more 'English' styles like Robert Adams' neo-classicism.