Saint Dunstan is fairly unusual among Anglo-Saxon saints in that we know where, if not precisely when, he was born. Dunstan was born in the village of Baltonsborough, Somerset, just a few miles south of Glastonbury, probably about the year 909 or 910. [Note: the Anglo-Saxon Chronicle gives the birth date as 925].

His father Heorstan was a Wessex nobleman of royal blood, and his family connections were to be of great benefit to him in his later career in the church. Glastonbury was at that time a popular place for Christian pilgrimage; folk traditions told that it was the first place of Christian settlement in Britain, and associated it with Joseph of Arimathea and Jesus himself. 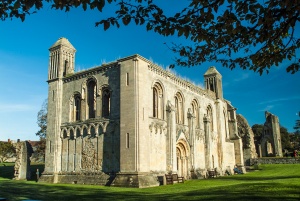 The Abbey at Glastonbury was a centre of learning and housed scholars from as far away as Ireland. The young Dunstan was educated at Glastonbury and then joined his uncle Athelm, Archbishop of Canterbury, at the royal court of King Athelstan.

Dunstan took to the monastic life much later than most; taking holy orders in 943, when he may already have reached 34 years. Apparently he was at first disinclined to a life in the church, but a skin disease which he feared might be leprosy made him change his mind.

After taking orders Dunstan returned to Glastonbury and built himself a small cell (i.e. a hut) beside the Abbey church. There he lived a simple life of manual labour and devotion. He soon showed great skill in the arts of metalworking, and he used his skills to craft bells and vessels for the church.

But his life was not to stay simple for long; Athelstan died, and his successor Edmund called Dunstan to his court to act as a priest. After a short period at court, Edmund named Dunstan Abbot of Glastonbury.

So once more Dunstan returned to the place of his birth, this time on a mission to reinvigorate the abbey. He instituted the strict Benedictine Rule, rebuilt and enlarged the church buildings, and established Glastonbury as a leading centre of learning and scholasticism. The effect of Dunstan's reforms, and in particular his efforts to produce a class of educated clerics, did much to encourage the growth of monastic settlements throughout Britain.

Dunstan acted as a royal advisor and negotiator for Edmund and his successor Eadred, and helped establish a period of peace from Danish attack. In 955 Dunstan's zeal got him into trouble when he reproved young King Eadwig for moral laxity. Eadwig promptly confiscated Dunstan's property and exiled the monk.

Dunstan found shelter at the monastery of Ghent, in modern Belgium, but he was quickly called back to Britain by Edgar, king of Northumbria and Mercia.

Edgar shared Dunstan's monastic zeal, and together they put considerable energy into monastic reform and expansion. Under Edgar's influence, Dunstan became Bishop of Worcester, and when Eadwig considerately died in 960, Dunstan was named Archbishop of Canterbury.

In this post, Dunstan carried on his work of encouraging scholarship and monastic settlements. He also oversaw every detail of Edgar's coronation as king.

It is said that he designed the coronation crown himself, and more importantly, that he altered the ceremony to put emphasis on the bond between church and monarch; making the coronation a sacred act, emulating the ceremony of consecration for priests. Dunstan's coronation ceremony still forms the basis of royal coronations today.

When Edgar died, Dunstan carried on as an advisor to his son Edward, but when Edward was murdered in 978 to make way for his brother Ethelred, Dunstan retired from court life. He lived on at Canterbury, delighting in teaching the young and only rarely troubling to involve himself in the politics of the realm.

When he died in 988 Dunstan was buried in his cathedral, where his tomb was a popular place of pilgrimage throughout the Middle Ages. Until Thomas Becket later eclipsed Dunstan's fame he was the most popular English saint.