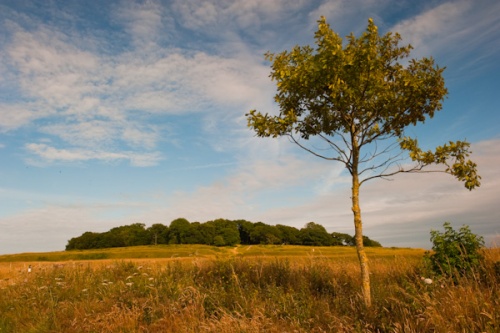 Contained within the considerable estates of Kingston Lacy House is this Iron Age hillfort, surrounded by three concentric ditches and ramparts. The ditches were dug to a depth of almost 20 feet, and the debris from the digging piled up on the inner side of the ditch, creating a high earthen rampart.

It is likely that a timber palisade would have surmounted the ramparts, affording cover to defenders. The main entrance (there are two) is flanked by three barrows, called locally the "Three Kings".

The site has not been subject to an excavation, but there indications that circular huts were erected in the interior of the fort. The most likely inhabitants of Badbury Rings were the Durotriges tribe, who were also responsible for Maiden Castle. The hilltop site was occupied as early as 6000 years ago.

Sometime around 500 BC, the site was adapted with a series of ditches and rings to create a fortified settlement. It seems likely that Badbury fell to an attack by the Romans around 43 AD. The Roman road from Old Sarum to Dorchester runs just to the west of the fort and there are rumours - though no hard evidence - that the Romans built a town called Vindocladia just outside the fort.

The remains of a Roman villa have been found on the outskirts of Shapwick village one mile away. We know that the hilltop site was occupied until the 5th or 6th century, though as early as 2000 years ago people began to move to Shapwick. 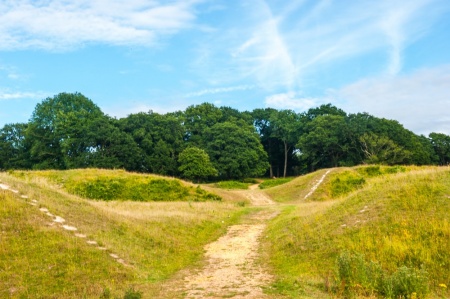 It has been conjectured that Badbury is the site of Mons Badonicus (Mount Badon) - the great battle at which King Arthur defeated the advancing Germanic tribes of Angles, Saxons, and Jutes in the late 5th or early 6th century.

Though there is no firm evidence that Badbury is Badon (or even that the battle ever took place), the similarity in names suggests such a possibility. The Rings were abandoned by 500 AD, though the site was later used as a fort by the Dorset Clubmen during the Civil War.

Outside the outer ditch is a series of Bronze Age barrows, suggesting a cemetery or traditional place of burial. Views from the top of the 330-foot hill are quite good, with possible sightings of the Isle of Wight on a clear day.

The two mile long Beech Avenue can be seen more easily; the avenue is composed of 365 trees on each side of the road, one planted for each day of the year. A new belt of trees has been planted by the National Trust to the outside of the current avenue, to take over when the ancient trees die.

The sound of traffic from the busy B3082 somewhat dents the atmosphere, but the location is still quite something, with views in all directions from the top of the Rings. The site is maintained by the National Trust, who manage it to encourage wildflowers.

There are easy walking paths through the site, though the crown of the hill is forested, which makes it somewhat difficult to get a real sense of the lay of the land within the innermost ditch. However, you can easily walk around the exterior ditches to get a good sense of the defensive nature of the site.

Perhaps the best place to really appreciate the massive size of Badbury Rings is from the National Trust car park, further down the slope of the hill.

Not to put you off visiting, but local tales tell that visitors to Badbury Rings at dusk have reported the spectral appearance of a wounded warrior, his face pressed to their car window. This so-called Phantom of Badbury Rings was reported by ghost researcher Dick Sheppard. If you need reassurance, I personally visited in the late evening and the only presence I experienced was a friendly horse owner taking his trusty steed for a ride.

OPENING DETAILS
Badbury Rings are open at all reasonable times. Dogs are not permitted. 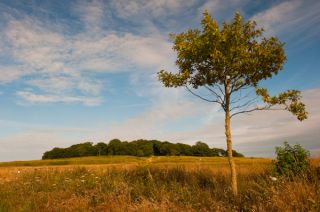 More self catering near Badbury Rings