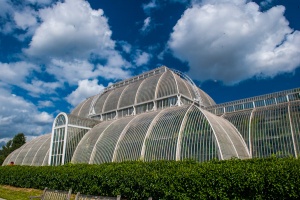 The Palm House at Kew

The growth of gardening
The Victorian age, the age of industrial revolution and squalid city slums, was also the age of a popular explosion of interest in that most British of occupations, gardening. And not just as a private pastime. For the first time, a concerted effort was made by authorities to provide extensive public gardens.

There was a reason for this benevolent behaviour by the well-to-do. They believed that gardens would decrease drunkenness and improve the manners of the lower classes. Intellectuals and the upper classes also encouraged gardening as a means of decreasing social unrest.

Kew Gardens
In 1840 the Royal Botanical Gardens at Kew passed from crown control to the government, which meant a transfer from enthusiastic amateurs to professional gardeners.

Kew was opened to the public in 1841, over royal opposition (the queen was fond of exercising there). In 1848 the striking Palm House was built, a result of improved glass and iron manufacturing techniques. The Palm House is a gigantic greenhouse 363 feet long, 100 feet wide, and 60 feet high. As a side note, Joseph Hooker, director of Kew from 1865-85, is credited with popularizing the ubiquitous rhododendron in Britain.

Bedding out
The expanding British Empire opened up far-flung corners of the globe to avid gardeners, and a sort of collector-mania spread throughout Britain. Avid botanists combed the globe for new and exotic plants to bring home. One of the results of this frenzy of collecting was another craze, bedding out plants.

The concept of bedding plants was Aztec in origin, but in the hands of Victorian enthusiasts it became a British passion. The bedding out craze, together with improved greenhouse design, resulted in a fashion for massed beds of vibrantly coloured plants laid out in intricate mosaic patterns.

The parsonage garden
Inevitably, this passion for exotic plants created a reaction in favour of traditional British plants and garden forms, particularly the parsonage, or vicarage garden. Strangely, the number of parsons who have had a strong influence on British garden history is quite high. The vicarage garden was a showpiece of 1-3 acres, planted, not with colourful exotics, but with a homogenous mix of traditional plants, such as wisteria.

Robinson, Jekyll, and the natural style
The most influential gardener of late Victorian times was William Robinson, author of The English Flower Garden, perhaps the most influential work in British garden history. Robinson, and later Gertrude Jekyll, emphasized a natural look, with creepers and ramblers, hardy shrubs, roses underplanted, herbaceous plants and bulbs. Two later examples of this natural style can be seen at Hidcote and Sissinghurst.

London garden squares
Another Victorian garden phenomenon was the London square. London squares were developed by 19th-century property developers. Here, the houses backed onto a green space where children could play in full view of the houses. The squares were the focal point for a communal social life. This green-space garden was run by a resident's committee, funded by subscriptions from all the householders.

As years went by and pollution increased, only the hardiest plants could survive, particularly the plane tree, which "took over" many of these squares. Examples of these London squares exist at Bloomsbury, Belgravia, Pimlico, Brompton, Kensington, Notting Hill, and Cadogan Place.

More Victorian Britain :
Back: Canals and Waterways
Next: Victorian Art and Architecture