HERITAGE HIGHLIGHTS:   An Elizabethan tower stands at the centre of this superb 20th century garden. 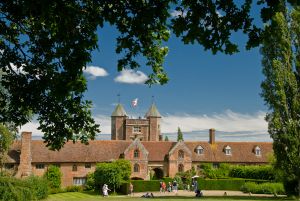 Sissinghurst is set in the woodlands of the Kentish Weald. The area was first settled in the early Saxon period. Indeed, the earliest reference to Sissinghurst as a place is in a medieval document which calls the place 'Saxingherste', or 'woods settled by Saxons'. The earliest dwelling was a moated manor owned by the de Saxinghersete family. Edward I stayed in the manor here on at least three occasions.

Of that manor house only the moat survives. The manor later passed to the de Berham family, who helped rebuild the grand church at Cranbrook. In 1533 Sir John Baker bought Sissinghurst manor. Baker was a high-flying courtier under a succession of Tudor monarchs, including Henry VIII, Edward VI, and Queen Mary. He served as Attorney General, Chancellor of the Exchequer, and Speaker of the House of Commons. He was an outspoken Catholic, rewarded with the moniker 'Bloody Baker' for his persecution of heretics.

It seems likely that Baker was responsible for beginning the rebuilding of the old manor at Sissinghurst. The wording of his will suggests that Sir John did not trust his son Richard to preserve the family fortunes; among his admonitions are: 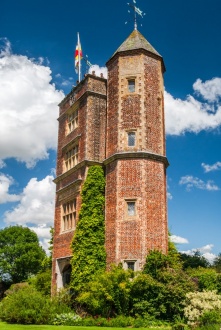 Sir Richard poured money into Sissinghurst, transforming it from a simple manor to an opulent showpiece home. He built the great tower as an observation point for hunting, and to serve as a grand entrance gatehouse to a huge courtyard house.

He created Priest's House as a sort of grand summer house; a place to hold outdoor picnics. So grand was Sissinghurst that Baker entertained Queen Elizabeth I here for three days in 1573. Elizabeth responded by making Baker a knight.

After the Elizabethan period Sissinghurst went into decline. In 1661 the last male heir died and rooms in the house were eventually let as flats. The decline continued, and in 1749 Horace Walpole described Sissinghurst as ' a park in ruins and a house in ten times greater ruins.'

Worse was still to come. In the Seven Years War (1756-1763) the Bakers let the house to the government to serve as a prison for French seamen. Up to 3000 French prisoners were held at Sissinghurst.

The prison gained such a terrible reputation for brutality that prisoners elsewhere were threatened with the prospect of being sent to Sissinghurst if they did not behave themselves. One guard was killed by a bucket dropped from the top of the Tower. The barn acted as the prison hospital.

It was during this period as a prison that Sissinghurst first became called a 'castle', a designation that owed nothing to any history as a medieval defensive structure.

The house after the war was almost a wasteland. The stables were used as a poorhouse, and the courtyard dug up for road material.

Vita Sackville-West and her husband Harold Nicolson bought Sissinghurst in 1930 for the sum of 12,375 pounds. There was no running water, no electricity, and no heating. But the romantic ruins of the Jacobean house appealed to Sackville-West.

Almost immediately the pair began to pour their energies into transforming the site into a garden to remember. It took all of her considerable fortune, which she augmented by writing gardening articles, but the effects of her work are stunning.

Out of the old ruins of the house and grounds, Sackville-West created a garden composed of individual 'rooms' set off by hedges. There is a large, informal orchard leading down to the old moat, and a Moat Walk beside the water.

The Top Courtyard leads to the tower through a lawn bordered with urns. Here you will find a Purple Border, which in fact is made up of a mix of blues, pink, lilac, and purple. The Rose Garden leads off the Top Courtyard. This area is at its best in late June and early July.

From here you will find the Spring Garden, or Lime Walk. This area was designed by Harold Nicolson, and though Sackville-West described it as resembling Platform 5 at Charing Cross station, she loved it, too.

Off the Spring Garden is the Cottage Garden, composed primarily of yellows, reds, and oranges surrounding South Cottage, a remnant of the Elizabethan house.

Beside the Tower on the other side is a White Garden, set around a weeping pear tree. All these separate garden areas are set off by tall clipped hedges, and are further divided by paths, some formal, some winding and sinuous.

The famous Tower looms over the entire garden. Visitors can climb to the top for superb views over the entire estate. Within the tower are two floors of exhibitions about Sissinghurst, and a third floor with Vita Sackville-West's study, looking almost exactly as she left it.

The effect of the whole is quite stunning, and it is easy to see why Sissinghurst Castle Gardens has earned a reputation as being one of the great gardens in the world. This popularity coms at a price, for the site can be extremely crowded with visitors, especially on fine summer days. For this reason there is often a timed ticket system in operation for visitors, so be sure to give yourself plenty of time to enjoy your stay.

Best in: April, September, October, and Wed.-Fri. after 4pm due to crowds.

Historic House: One of the outstanding gardens of the world, created by Vita Sackville-West and Harold Nicolson as a series of separate gardens within the larger garden. Climb the tower of the Elizabethan house to appreciate the garden as a whole. There are colour schemes throughout, as in the orange and yellow garden and the white garden. The Rose Garden has many old varieties, and there is a thyme lawn leading down to the herb garden.