The Order of the Garter

Origins
The Order of the Garter was the first and remains the most prestigious, British order of chivalry. It was begun in or around 1348 by Edward III, and initially included the monarch and 25 knights. Membership in the order was intended as a mark of royal favour and a reward for loyalty to the sovereign and for outstanding military service. 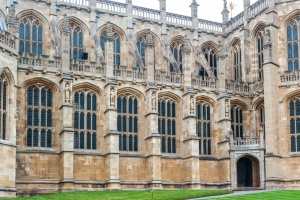 The legendary beginnings of the Order centre around the figure of Joan, Countess of Salisbury. The story goes that while the Countess, a notable beauty who was rumoured to be the king's mistress, danced at a court function, she chanced to lose a garter. King Edward gallantly picked it up and tied it to his own leg. When he observed the snickers of those around him, Edward remarked: "Honi soit qui mal y pense" (Shame on he who thinks evil of this). This offhand remark became the motto of the order.

Some modern scholars have suggested that the garter may have originated with the leather straps used to fasten pieces of armour. Given the military focus of the Order that seems a likely, if less romantic, possibility.

Variations on this story have the woman in question being Queen Philippa or Joan, the "Fair Maid of Kent", later the wife of the king's eldest son, Edward the Black Prince.

There is nothing to specifically disprove the above story, but it seems equally likely that the Order was a considered attempt by Edward to provide a focus for loyalty towards the monarch among his leading nobles. Edward was well aware of the growing cult of St. Denis in France, and thought that providing his own realm with a national saint tied to the monarchy, would only benefit his own position and solidify the ever-precarious loyalty of his nobles.

Insignia of the Order
Thus, at roughly the same time that the Order of the Garter was founded, Edward proclaimed Saint George as the patron saint of England and the Order. Aside from a blue garter, worn below the left knee, the first insignia of the Order was "the George", a badge depicting St. George slaying a dragon. St. George's Chapel at Windsor Castle was named the spiritual home of the Order.

As the years went by further symbols were added to the official apparel of Order members. During the 16th century, a collar was added to the garter and George badge. The collar could not feature precious stones, but could otherwise be freely adorned according to the tastes and budget of the owner.

In the 17th century a broad red ribband was added, and the familiar silver star badge with the red cross of St. George set within radiating beams of silver. Blue velvet robes complete the picture.

English subjects can be named Knights of the Garter in exchange for meritorious public service, contributions to the nation, or simply as reward for personal service to the monarch.

Over the centuries a number of changes have been made in membership requirements; during the Middle Ages women were named to the order, though not as full members. From 1509-1901 the order was exclusively male, with the exception of reigning queens. After 1987 women were accorded full membership privileges.

Numerous foreign nobles have been named to the order over the years. The distinction of membership helped cement foreign treaties and alliances. Foreign monarchs are known as "Stranger Knights" and their numbers are in addition to the normal quota of 24 knights (plus royals) in the order.

Obligations
Though the Order today is purely ceremonial, members are obliged to display their "achievements" in St. George's Chapel, Windsor Castle. These "achievements" include a banner depicting their heraldic coat of arms, an enameled stallplate, sword, crest, and helmet. When a member dies the insignia are returned to the monarch, but the stallplates remain in place, providing a memorial and heraldic record.

Every June an official gathering of the Order is held at Windsor Castle, and at that time any vacancies are filled with new members. The monarch and royal members of the order attend an official luncheon at the Waterloo Chamber, after which they walk in procession to a service at the Chapel. At this writing, royal members of the Order include Queen Elizabeth, Prince Phillip, Prince Charles, and Princess Anne.