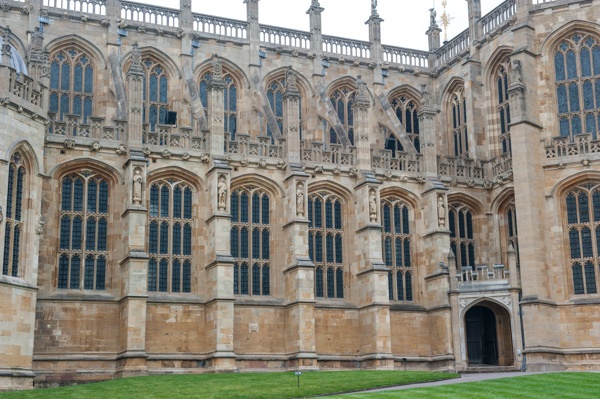 St. George's Chapel is rightly considered one of the most beautiful examples of Perpendicular (late-medieval) Gothic architecture in England. The Chapel was begun in 1475 by Edward IV and finished 50 years later during the reign of Henry VIII.

These "achievements" include a banner depicting their heraldic coat of arms, an enamelled stallplate, sword, crest, and helmet. When a member dies the insignia are returned to the monarch, but the stallplates remain in place in the chapel, providing a memorial and heraldic record. The Garter Stalls were carved between 1478 and 1485.

Within St. George's are the tombs of 10 monarchs, including Edward IV, Charles I, George V and Queen Mary, and George VI. Also buried here is Henry VIII, who lies beside his favourite wife, Jane Seymour. Notable is the tomb of Henry VI, near the high altar. After Henry's death in 1471, miracles were reported by visitors to the devout king's tomb, and the chapel became a popular place of pilgrimage.

I've visited the chapel on three occasions now, and each time I walk away shaking my head in awe. The architecture is simply astonishing; the vaulting of the nave alone is worth a trip to Windsor. And the memorials that line the chapel are simply breathtaking. I'd have to say that one of the most recent memorials is the best; the unashamedly emotional memorial to Princess Charlotte is exquisite in its detail.

I do think that the adjoining Albert Memorial Chapel is one of the highlights of St George's; the opulent 19th-century style won't appeal to everyone, but to my eyes, it is a tour-de-force, a quite wonderful expression of Victorian art and style.

By contrast, the memorial to Henry VIII and Jane Seymour is almost startling in its simplicity; a very plain stone slab in the centre of the quire is not what you might have expected from the ebullient Henry!

But even if you are not really interested in architecture, the aura of history that surrounds the chapel is almost tangible. You are walking in the footsteps of some of the most colourful, infamous, and famous names in English history. It is an amazing place.

I would highly recommend avoiding the height of the summer tourist season, though, as the press of people can be oppressive. We were assured by one helpful guide that in July and August you can't see the floor, there are so many people edging their way through. Whatever time of year, make a point of coming; St George's Chapel is a national treasure! 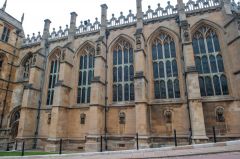