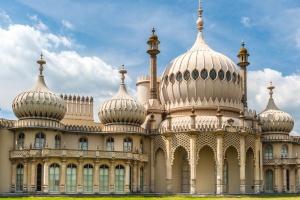 Technically John Nash does not belong to the Victorian period, but to the earlier Georgian era. However, I have chosen to place him in the Victorian era as his major works were very much in the style of the 19th century, and his influence was felt much more heavily in that period.

John Nash (1752-1835) was the son of a millwright, but he cast aside his father's profession and apprenticed with architect Sir Robert Taylor.

He soon wearied of apprenticeship, however, and In a typical act of impatience he set up his own practice.

Nash's first major venture was a speculative effort building London houses of brick which were faced with stucco painted to emulate stone. The venture fell flat, and Nash retired to the country. There he began to build a successful practice, partnering with landscape architect Humphry Repton on several projects - Nash built the houses, Repton the grounds.

In 1802 the two split up and Nash returned to London. There Nash's natural ebullience found its scope tackling visionary (read extravagant) schemes for his sponsor the Prince Regent.

In 1811 the Prince Regent asked three architects, including Nash, for ideas on developing the farmland called Marylebone Park and the surrounding areas. Nash's ambitious plans included a "garden city", with villas, terraced houses, crescents, a canal, and lakes.

The prime focus of the development was a proposed avenue from Prince Regent's Park to "Prinnie's" home at Carlton House in the Mall. The area covered by Nash's scheme covered the present Regent's Park, Trafalgar Square, St. Jame's Park, and Regent Street.

The enthusiastic Prince Regent threw his support (and more importantly, his money), behind Nash's scheme, and for the next 23 years until his death, Nash laboured to create his vision.

Several elements of Nash's sweeping scheme had to be abandoned, including a summer palace in Regent's Park, and the present-day Regent's Street has been much altered.

As the work in London continued, Nash took on other projects for the Prince Regent, including the remodelling of Brighton Pavillion.

There was already a villa at Brighton, designed by Henry Holland, and the Prince Regent asked Nash to make it into a palace. This Nash did, beginning in the Indian fashion then popular, and as work progressed, incorporating further Eastern design elements. The result has been called "Indian Gothic with a flavour of Chinese" (Encyclopedia of Architecture, Doreen Yarwood, 1993).

Back in London, Nash remodelled Carlton House as Carlton House Terrace (1827-1833) and built Cumberland Terrace (1827), The Royal Mews (1825), Haymarket Theatre (1820), All Soul's Church in Langham Place (1822-25). He also created what is now Trafalgar Square. The buildings that surround the latter were all added by later architects. 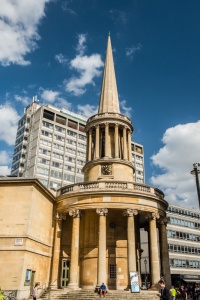 Nash's other major building project in London, Buckingham Palace, did not fare so well, however. When Nash began work on the Palace in 1825 it was still Buckingham House. The Prince Regent had decided that Carlton House was "antiquated, rundown, and decrepit", and decided to create a palace on the site of the Duke of Buckingham's former villa.

Nash was dilatory in his work, however (and erected and pulled down several wings of the building according to his moods), that the Prince Regent died before work was finished. Nash was finally dismissed from the project, and all that remains of his work at the palace is the west wing.

Nash had designed a triumphal gateway to stand at the end of the Mall. However, it was discovered that the state coach was too wide to fit through the opening! The gate was then moved to Hyde Park corner, where it became known as Marble Arch.

Summing Up
John Nash helped define the style of an era. Through his friendship with the Prince Regent, his influence on Regency art and architecture cannot be overstated. He worked in many architectural styles, from Gothic to Italianate, Palladian, Greek, and picturesque. He was enthusiastic and impatient, yet a man blessed with great talent and creative vision.