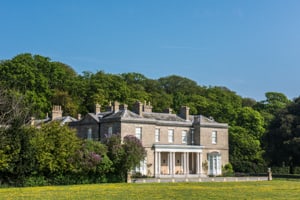 Humphry Repton was born in 1752 at Bury St. Edmonds, the son of a prosperous tax collector. He was expected to enter commerce, but several early attempts at business were dismal failures.

Repton worked for a time as a private secretary to William Windham, Lord Lieutenant of Ireland, but eventually returned to Essex determined to succeed Capability Brown as England's preeminent landscape gardener.

He wrote to many of the genteel acquaintances he had made while in Ireland, and offered his services as an "improver of the landscape". He soon had steady work, including long stints at Cobham Hall (Kent) and Ashridge (Herefordshire). Repton went beyond the scope of Brown, to include a vision of the house itself and its place in the landscape that surrounded it.

Indeed, Repton is credited with coining the term "landscape garden" to describe the natural style of gardening which he felt required "the united powers of the landscape painter and the practical gardener."

To Repton, as with William Kent before him, gardening was an art form, and the landscape was his canvas, though he admonished those who sought to impose the classical Italian style on the English climate and landscape. He defended Brown's work from its detractors, pointedly commenting that "Brown copied nature, his illiterate followers copied him".

Repton read widely, and demonstrated his gardening theories with precise mathematical diagrams. He produced several articles on gardening for the Linnean Society, and 5 books on gardening philosophy and practice, including Sketches and Hints on Landscape Gardening (1794).

These books were often drawn from material compiled for his famous "red books". The red books were volumes created for each landscaping client, complete with carefully drawn before-and-after maps, illustrations, watercolours, and ideas for changes to the client's gardens. These volumes were then bound in red leather and presented to the client.

Repton dabbled in architecture as well as garden design, the most successful of his projects being Sheringham Hall, Norfolk.

Humphry Repton died in 1818 and is buried in the churchyard of Aylsham, Norfolk.