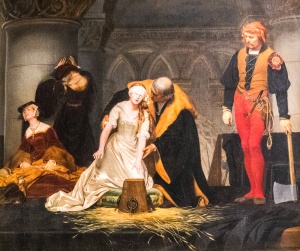 The Execution of Lady Jane Grey in
the Tower of London, by Paul Delaroche

While Henry VIII grumbled towards a cantankerous death, he felt it necessary to settle the matter of his succession. In his will, he named his son Edward to succeed him. After Edward, and the heirs of his body, he named his daughter Mary and the heirs of her body, and after that, his second daughter Elizabeth. Henry's will was duly approved by an acquiescent Parliament.

When Henry finally died in 1546, his son Edward took the throne as Edward VI. Since Edward was only 9 years old at the time of his coronation, government was actually conducted by a Council of Executors. The Council was headed by Edward's uncle, the Earl of Hertford, who was named Protector of the Realm. Shortly after taking office, Hertford had himself named Duke of Somerset, and it is by that name that he is best known.

Somerset was an interesting character; a man of occasional laudable ideals, but with a knack for alienating people and going about his business with the least tact possible. He managed to pass measures aimed at widespread religious tolerance, for example, yet also aroused the church to fury by imposing the Act of Uniformity and the Book of Common Prayer upon it. More importantly, he aroused Parliament to an equal fury by his measures against land enclosure.

Somerset found himself wholly without support where it counted the most; amongst his fellow nobles. John Dudley, Earl of Warwick, headed Parliamentary opposition which resulted in Somerset's arrest. Somerset was forced to resign as Protector, had some of his property seized, and was briefly held in the Tower of London.

Into the void created by the deposition of Somerset stepped John Dudley, better known by the title he later appropriated, Duke of Northumberland. Where Somerset had been possessed of laudable (by modern standards) motives on occasion, Northumberland was motivated by greed and personal power. His administration was marked by a move towards extremism and harshly repressive laws aimed at squelching any and all opposition to the Duke's power.

Somerset fell victim to those laws, and was executed in 1552. Northumberland's position might have seemed unassailable, but there was widespread opposition to his leadership within Parliament. More importantly, Northumberland was well aware that Edward was ill and probably had not long to live. 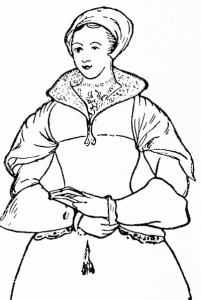 In a desperate bid to secure his own power upon the young king's death, Northumberland concocted a plan to put a puppet upon the throne. That puppet was Lady Jane Grey, the quiet, devout sixteen-year-old granddaughter of Henry VIII's younger sister, Mary Rose. Northumberland believed that Jane would be pliable enough to do whatever he asked of her.

It took a hefty measure of gall to put forward Jane Grey as the future queen of England, since her claim to the title was extremely weak. But gall was something Northumberland had in abundance.

He married Jane to his own son Guildford Dudley, and through them believed he would be able to control the crown when Edward finally died. Jane had no inkling that her new father-in-law planned to put her forward in Mary Tudor's place when the king died.

Northumberland had little trouble persuading the fervently Protestant Edward that the throne must not fall to his Catholic sister Mary. The king was convinced to circumvent his father's will and name Jane's mother Frances Grey as his successor. Frances then duly relinquished her own "claim" in favour of her daughter, Jane. With great difficulty, Northumberland convinced the Council to fall in with his plans.

Edward died on 6 July 1553, and four days later Jane Grey was proclaimed Queen of England. But here Northumberland's plans suffered their first check. Jane flatly refused to allow her new husband Dudley to be named king, a title he had manifestly no right to possess.

Instead, she proposed he be created Duke of Clarence. Northumberland, his wife, and Jane's own husband, were furious at her refusal, but she would not unbend from what she considered the only right and lawful course.

A second setback soon followed; to secure the success of his plans Northumberland needed to capture Mary and prevent support forming around her. But Mary was warned of his plans, and barely escaped the men sent to imprison her. Northumberland abandoned London and set off in pursuit of Mary, who had taken refuge at Framlingham Castle in Suffolk. In his absence, the Council acted quickly and declared its support for Mary.

Mary was declared queen at Paul's Cross, London, and Northumberland realized that his plans had failed. He threw himself upon Mary's mercy. She was inclined to be magnanimous in victory, but Northumberland's enemies on the Council persuaded her that the Duke was too dangerous, and he was quickly put to death.

As for Jane Grey, she and her unwelcome husband Guildford were sent to the Tower. She had spent but nine short days as queen of the realm.

Guildford was held in the Beauchamp Tower and Jane at the house of the Gaoler at #5 Tower Green. Though the couple were neighbours, they were forbidden contact.

On November 13 they were brought to trial for treason at the Guildhall and speedily found guilty. Even then, Mary was inclined to be merciful and spare the lives of these unwitting pawns in the schemes of Northumberland. But once again the plots of others ensnared Jane Grey. This time it was her father Henry, now Duke of Suffolk, who brought about her final ruin.

Henry Grey joined the ill-fated revolt known as the Wyatt Rebellion. Sir Thomas Wyatt, angered at Mary's plans to marry Phillip of Spain, raised an armed revolt in Kent and marched on London. His cause failed to rouse the Londoner's support, and Wyatt was captured. Grey tried to raise the Midlands in revolt, but he also was swiftly captured. Mary realized that as long as Jane lived she would continue to be a focus for rebellion, so on 7 February 7, 1554 she reluctantly signed Jane's death warrant.

Guildford begged Mary's leave to visit Jane, which Mary granted, but Jane refused to meet with her husband, saying 'it would disturb the holy tranquility with which they had prepared themselves for death.'

On the morning of February 12, Jane watched from her window as Guildford was taken to Tower Hill, and she was still watching when his headless corpse returned to the Tower. Then it was her own turn. At a scaffold erected on the Tower Green, Jane Grey was beheaded.

The "Queen for Nine Days" was buried in the Chapel Royal of St. Peter ad Vincula at the Tower, near her husband Guildford and his father Northumberland, who by his ambition had brought about her death.

Birth of Mary I

The future queen's birth was a major disappontment to Henry VIII, who was hoping for a male heir