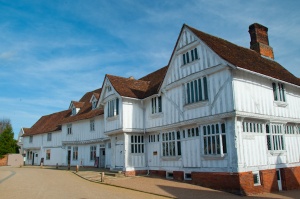 There are several reasons for this change. One is simple; there were plenty of churches for the needs of the population of England. More profoundly, the church was no longer the force it had been in the medieval period. The growing unpopularity of the church, with its perceived worldliness and wealth, meant that those with money to spend now spent it on themselves.

The Dissolution of the Monasteries under Henry VIII meant that there were large areas of land freed up for exploitation by the newly wealthy gentry class. New farms were built upon former monastic lands, and labourers' cottages for tenants who worked the land.

Curiously, changes in architectural style resulted in buildings shrinking; becoming more intimate. Rather than the move towards spaciousness so evident in the late Gothic period, Tudor architecture focussed on details. Windows and doors were smaller, but more ornately decorated, more complex. The smartly pointed arch of the Gothic period gave way to the flattened Tudor arch. The most striking window treatment to emerge in the Tudor period is the oriel, a projecting, multi-sided window cantilevered out from an upper floor, and supported on a bracket or corbel from beneath. 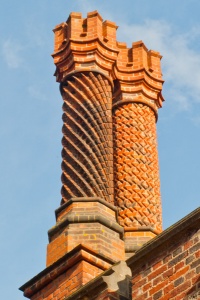 Chimneys and enclosed fireplaces became common for the first time. Indeed, the Tudor chimney is one of the most striking aspects of this period. One of the reasons for the increased use of chimneys was the widespread adoption of coal as fuel. Previously wood smoke was allowed to escape from the interior through a simple hole in the roof. Now, the increased smoke from coal made necessary evolved forms of fireplaces, flues, and chimneys to get the smoke away from the living space. Chimney stacks were often clustered in groups, and the individual chimney columns were curved, twisted, and decorated with chequerboard patterns of different-coloured bricks.

And that brings up a second noticeable characteristic of Tudor architecture; the use of brick in building. Spreading from East Anglia, where it had been introduced from the Low Countries in the late medieval period, brick became one of the most common building materials. Some bricks were imported into England, brought back in ships that exported English wool to the continent. Others were made in brickyards established in East Anglia by Dutch immigrants.

It may seem strange to the modern reader, but brick was originally a luxury item. Only those at the top of the social and economic spectrum could afford to build in brick. The most remarkable Tudor brick building is Hampton Court Palace, but a multitude of smaller estates and country houses made use of this newly fashionable luxury material. 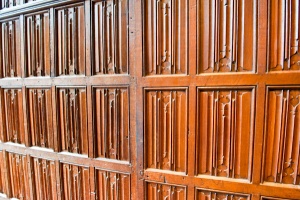 In several areas of England, notably Cheshire, Lancashire, and Warwickshire, wooden houses, generally in oak, are more numerous than brick. Wood was used to create a skeleton which was filled in with brick or plaster. Bricks were often laid in a herringbone pattern, made possible because they had no structural responsibilities; the wooden posts took the strain and the bricks served as decorative infill. A hybrid form saw the lower story built in stone, with wood used for the upper stories.

Where bricks were too expensive plaster was the infill of choice, resulting in the typical "black-and-white" small Tudor house, whitewashed plaster set between blackened oak timbers. Often the upper stories of these houses projected above the lower floors, particularly in towns, where ground-floor space was at a premium and the house owner might be taxed according to street frontage.

Even in wooden houses, though, window and doors are similar to the stone designs, with small arches capped by simple squared-off mouldings.

The great houses of the Tudor period featured fanciful gatehouses. The idea was to create an impressive, awe-inspiring entrance. This was accomplished by entry through a broad, low arch flanked by tall octagonal towers decorated with ornate false battlements. Above the entry arch many houses prominently featured a family coat of arms.

The most obvious feature of interior decoration is the widespread use of oak panelling. This panelling often extends from floor to ceiling. The most common motif used for the panelling was the linen-fold, a raised carving imitating folds of cloth. The term "linen-fold" is a 19th century one; at the time this pattern was termed "lignum undulatum", or "wavy woodwork".