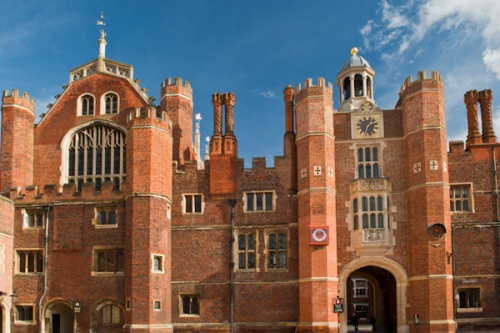 A red-brick palace built in grandiose style by Cardinal Thomas Wolsey, advisor to King Henry VIII. Henry liked Hampton Court so much he took it over from the unfortunate Wolsey. The palace was later redesigned by Sir Christopher Wren to create an English version of Versailles Palace on the banks of the Thames. The palace is surrounded by justly famous gardens, including the earliest hedge maze in Britain and a recreation of a Tudor knot garden.

There are really two palaces at Hampton Court; the first is Tudor, begun by Thomas, Cardinal Wolsey on the site of a 14th-century house built by the Knights Hospitaller of St John, and later owned by Henry VIII. This palace is a cornucopia of Tudor chimney clusters rising over red brick courtyards. The second palace is a baroque masterpiece, designed for William and Mary by Sir Christopher Wren, and surrounded by superb formal gardens.

Sometime before 1338 the Hospitallers built a house at Hampton, on the north bank of the Thames, as a centre to administer their large farm estate here. In 1494 one of Henry VII's courtiers, Giles Daubeney, took out a lease on the Hospitaller's house. 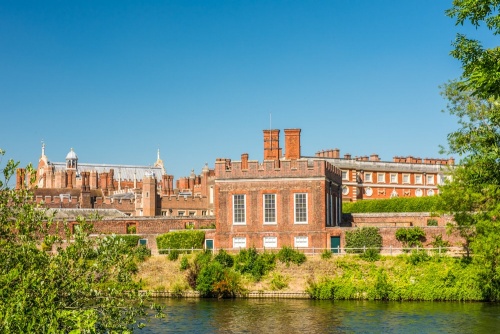 In 1514 Thomas Wolsey bought the estate and began to build a grandiose palace, suitable for the most powerful and influential man in the realm after the king himself. Wolsey added a grand new entrance courtyard and chambers to entertain the king and his court, and to maintain a large household in lavish style.

Wolsey also built a long gallery overlooking the gardens. The Cardinal's wealth and lavish lifestyle can perhaps be judged by the fact that the palace walls were hung with hundreds of tapestries from the continent, and these were changed every week.

In 1525 Wolsey officially presented Hampton Court to the king, though he continued to live there and add further embellishments to the jumble of buildings, including a chapel and cloister walk for formal processions.

But Wolsey's high flying career came to an abrupt end when he was unable to procure Henry's divorce from his first wife, Katherine of Aragon. He was arrested and charged with treason but died before he could be put on trial, and Hampton Court passed into Henry's hands.

Henry lavished even more money on Hampton Court, creating an ornate royal palace with quarters for his new queen, Anne Boleyn, royal council chambers, and a glorious great hall to serve as the heart of palace life. To serve the hall required large new royal kitchens.

Henry also built a range of privy (private) quarters for himself, which were served by hot and cold running water, an unheard of luxury for the time. Henry did not overlook recreation, and built a real tennis court and a pair of bowling alleys. 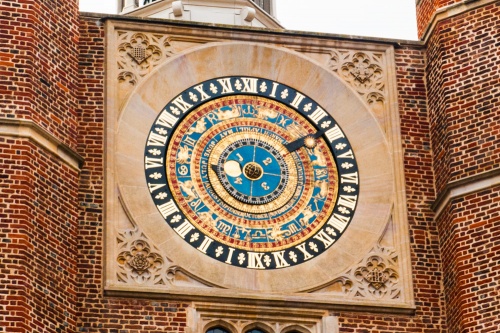 Queen Anne fell from grace before her quarters at Hampton Court were complete, and the first queen to use them was Jane Seymour, Henry's third wife.

Christmas 1603 saw the new monarch, James I, entertained by an acting troupe called The King's Men, who numbered among their members a certain William Shakespeare, actor and playwright. In January 1604 King James convened the Hampton Court Conference of religious leaders, a conference which was to result in the publication of the King James version of the Bible a decade later.

Though each monarch left some mark on the palace, it was under the joint reign of William and Mary that Hampton Court underwent the greatest transformation. They turned to Sir Christopher Wren, the leading architect of the day, to remodel the Tudor palace in a grand baroque style that would rival or even surpass the Versailles Palace in France.

Queen Mary oversaw the building project, but when she died five years after taking the throne the project lapsed. A combination of lack of funds and William's loss of interest after his wife's death meant that it was a further 6 years before the king's apartments were finished.

The palace gradually fell out of favour under the first Georgian kings, and George III began the custom of granting living space at the palace to old and favoured courtiers and royal servants. These living quarters became known as 'grace and favour' apartments. 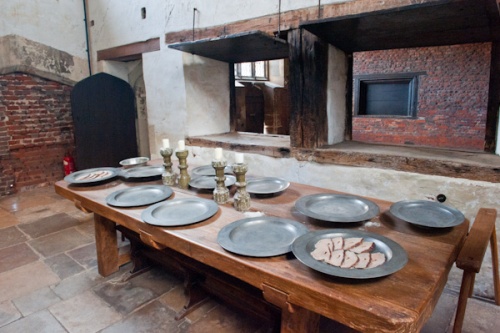 The palace buildings are built around three courtyards, Base Court, Clock Court, and Fountain Court. As you enter the palace under a vaulted gatehouse built by Cardinal Wolsey in 1521 you find yourself in Base Court.

Around the outside of the court, rising like a forest of twisted pillars, are Tudor chimneys of various designs. There are over 240 such chimneys around Hampton Court, but they are not original; rather, they are Victorian copies based on original Tudor designs.

To one side of Base Court is a passage leading to a display area where Mantegna's Triumph of Caesar is on display.

Directly ahead, across the Base Court, is another Tudor gateway known as Anne Boleyn's Gatehouse, leading to Clock Court, named for a marvellous astronomical clock installed by Henry VIII. This ornate, gilded clock was built around 1540 by Nicholas Oursian, and shows the time, high tide, phase of the moon, day of the year, sign of the Zodiac, and the date.

From a passage under Anne Boleyn's Gatehouse stairs lead to Henry VIII's Great Hall, a glorious Tudor hall with a lavishly gilded hammer-beam roof. This was the centre of palace life in Tudor times, and up to 600 people ate meals in the hall. As you pass through the hall, note the stained glass windows bearing the W initial of Thomas Wolsey. The hall leads to the processional route to the council chamber and the Chapel Royal.

Here is the Haunted Gallery, where the ghost of Catherine Howard, Henry's fifth wife, is said to appear. The ghostly tale, based on real events, is this: when Catherine learned that Henry had charged her with adultery, she tried to intercept him in the chapel and plead her innocence. She was seized by guards before she could reach the king, and dragged to her rooms, screaming and begging the king for mercy. Her ghost is said to still appear, haunting the gallery. 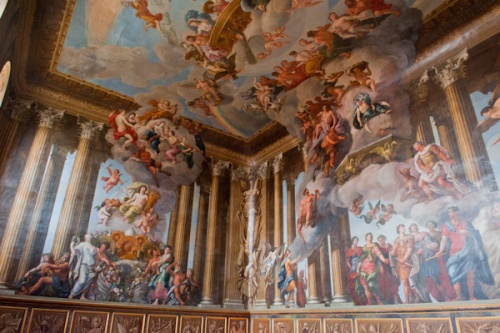 The King's Staircase, by Antonio Verio

Perhaps the most wonderfully decorated room at Hampton Court is the Chapel Royal, built by Wolsey and still in regular use for religious services. The vaulted ceiling was built by Henry VIII and features glorious painted, gilded pendants and decorative vaulting ribs.

Once you've had your fill of Tudor Hampton you can leap forward a few hundred years and enter a realm of stately elegance in the apartments built for Mary II and her co-ruler, William III. The Apartments are completely separate, with their own staircases and suites of rooms.

The King's Staircase features fabulous murals in classical style by Antonio Verrio, meant to emulate a grand Roman hall. The King's Staircase leads to the Guard Chamber, which is full to the ceiling with a collection of 17th and 18th-century weapons. 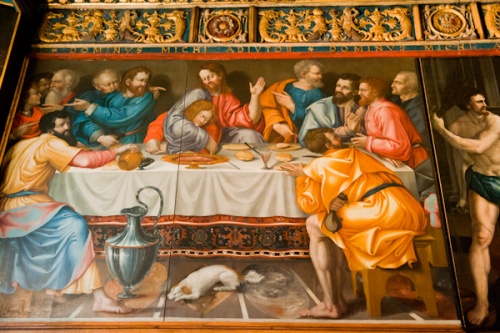 Painted panel in the Wolsey Closet

You then pass through a suite of connecting chambers, including the King's Eating Room, where the fireplace is surrounded by magnificent woodwork carved by Grinling Gibbons. The King's Apartments conclude with the Little Bedchamber and Great Bedchamber, and a set of private apartments where the king could relax, far from the gaze of attending courtiers.

Mary II's Apartments echo the design of William III's Apartments, with a suite of connecting rooms reached by a grand staircase decorated with glorious murals designed by William Kent. The Queen's apartments were created out of the Tudor quarters meant for Anne Boleyn.

The Queen's rooms were completed by Sir John Vanbrugh, perhaps the most famous name in English Baroque architecture. Vanbrugh was responsible for the fireplace in the Guard Chamber, with rather amusing, larger than life figures of guards on both sides of the fireplace.

The Queen's Bedchamber features a state bed made for the future George II and Queen Caroline in 1715. The painted ceiling is superb, executed by Sir James Thornhill to depict members of the royal family in a scene of classical allegory.

This is the final suite of rooms on view at the palace, created for George II and his royal family. Though this suite of chambers is restrained compared to the ebullient baroque designs of Mary II and William III's apartments, the major interest is not the architecture, but the quite superb collection of art on display, among them works by Caravaggio and Sir Peter Lely.

These are outshone, however, by the painted panels in the Wolsey Closet. This small room is filled with a fabulously colourful frieze that may have been brought here from another part of the palace. 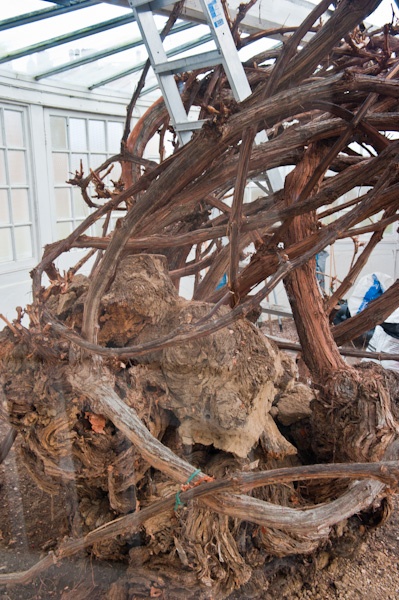 As magnificent as the palace interiors undoubtedly are, the gardens draw just as many visitors, partly for their beauty but also because of their historical significance. Immediately behind the King's Apartments is the Great Fountain Garden, designed in 1689 by Daniel Marot out of Henry VIII's hunting park.

This garden is laid out with broad, gravelled walks and 13 fountains to add interest to wide canals, including Long Water, bordered by avenues of lime trees. On the south side of the palace is the Privy Garden, designed as a formal, private area for the monarch. The garden as we see it today is a recreation of William III's 1702 Privy Garden.

At the river end of the garden is a gilded wrought iron screen designed by Jean Tijou, allowing glimpses of the Thames floating past the palace grounds. At the far end of the Privy Garden is a sunken garden designed for Mary II, and beside this, a special greenhouse is home to The Great Vine, the oldest known vine in the world. The Great Vine was planted by Capability Brown in 1768, and it still bears fruit each year. 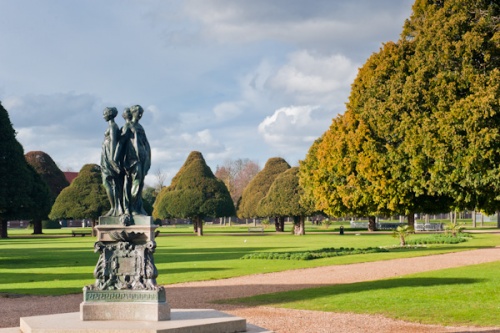 As fascinating as the gardens are, most visitors - especially if they have children in tow - will head straight to The Maze, the oldest known hedge maze in the world. The Maze was planted around the year 1700 as a place for courtiers to find peaceful refuge from the hustle and bustle of court life. Trapezoidal in layout, the Maze was originally planted with hornbeam from the Netherlands, but this was later replaced by yew.

Jerome K Jerome's popular novel 'Three Men in a Boat' had his heroes trapped in the Maze until they were rescued by an attendant, but you shouldn't find it that hard to reach the centre and find your way out again (it took us 10 minutes of twists, turns, and arguments about which way to take next).

Garden: A mix of garden styles surrounding the former royal palace. Features include the Great Vine (planted 1796), a popular hedge maze (1690 replanting of an even older design), pond gardens with bedding plants, a recreation of a Tudor knot garden, fountain gardens, a wilderness garden, laburnum walk, and rose garden, The annual flower show is extremely popular. Allow plenty of time. Best in: spring for wilderness garden, May for the laburnum walk.

Note: You can get Free Entry to Hampton Court Palace with the London Pass