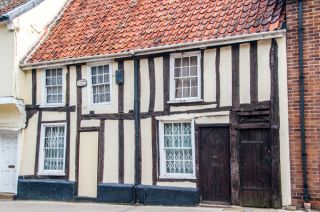 The Norfolk town of Thetford packs a terrific amount of history into a relatively small area. Thetford Tourism has produced a very enjoyable Heritage Trail linking the major attractions. What follows is my summary of the Heritage Trail, including all the bits that I enjoyed most about visiting Thetford.
The trail begins at the Thetford Priory site off Minstergate. The priory was built by the Cluniac order in the 12th century and is one of the most impressive monastic remains in England in terms of size. The priory gatehouse still stands in the gardens of Abbey House. Before the altar of the abbey church you can see the tomb of Thomas Howard, Duke of Norfolk, who led the English forces at the Battle of Flodden.

From the priory take the underpass across London Road to Minstergate where you will find the Charles Burrell Museum. The museum is housed in a former paint shop of the old Burrell works. At one time the Burrell company employed about 10 percent of the entire Thetford workforce. Go along Minstergate to White Hart Lane, where you will turn left.

Proceed uphill to the Ancient House Museum, an attractive 14th-century timber-framed building that is now a museum of local heritage. At the top of White Hart Lane is the location of the house where author Thomas Paine grew up. A plaque on the side of the Thomas Paine Hotel remembers the writer who became such an influential figure in the American Revolution. Retrace your steps to the bottom of White Hart Lane and turn left onto King Street. On the left is a statue to Paine, looking very dashing with a quill pen in one hand. The statue stands before King's House, which was visited by at least 3 monarchs, among them Henry I, Elizabeth I, and James I. Behind the house are attractive gardens, open to the public during daylight hours.

Proceed along King Street to the Market Square. Near you is the war memorial, but at the far end of the square is the Guildhall, built in the early 20th century to replace a building that dated to 1337. Behind the Guildhall in Cage Lane is the Dad's Army Museum, remembering the popular TV series which was filmed in and around the Thetford area.

From the Market square pass along Castle Street and turn right to follow the obvious footpath that leads through several sets of Iron Age earthworks to the huge Castle mound built by the Normans. At 80 feet high this is one of the largest Norman mottes in England. There is no purpose-built path to the top of the castle mound, so you will have to scramble up the slope if you want to enjoy the view from the top.

From the castle mound follow the path to Old Market Street, past the Dolphin inn (built in 1694) until you reach the Old Gaol House, recognizable by the pair of manacle carvings set upon the wall. The current building dates to 1796 when it was built to replace an earlier medieval gaol. The building was enlarged in 1816, but a report of 1820 says that it held 17 people in a cell measuring only 19 feet by 8 feet. Apparently the smell from the cell was so bad that the gaoler ran away after opening it.

Turn left via Nether Row to pass the Old Coffee Mill, later the Mason's Hall. The mill began in the medieval period, but in 1936 it was home to the Ibex Coffee company, which accounts for its name. The mill no longer functions, but its sluice gates are still in use to control the water levels on the Little Ouse.

Turn right on Mill Lane, where you can see the redundant 12th century church of St Mary the Less across the road. Turn right again on Bury Road, where you will pass a row of almshouses established by Sir Richard Fulmerston in 1610. At the end of the road on Bridge Steet is the Grammar School, which can claim to be one of the oldest school in the country, with a roll of headmasters dating back to 1174.

Turn right at the Town Bridge and cross to Butten Island by way of the footbridge at the far end of the parking lot. On the island, you will see the large equestrian statue of Duleep Singh, the last Maharajah of the Punjab, who settled at Elveden, only 3 miles away, after the British ousted him from his kingdom in 1849. Retrace your steps to Town Bridge, turn right, and you will find yourself at the Bull Inn, at the bottom of White Hart Lane. Turn left onto Minstergate, and return to the priory.