Most people visit the North Norfolk Heritage Coast for the wonderful birdwatching that the area presents. The coast is one of salt-marshes and sand dunes backed by gentle chalkland away from the sea. Bird reserves at Titchwell and Cley (see below) are world famous.

There is an excellent network of walking trails along the coast, including the long-distance North Norfolk Coast Path.

Land reclamation in the 17th century left the inaptly-named village of Cley-next-the-Sea a full mile from the shore. The large scale of 14th-century "wool church" of St. Margaret's at Cley is a reminder of the area's medieval prosperity. The church stands on high ground above meadows which were once the harbour. The village is also notable for the large 18th-century windmill which towers over the old quay. The windmill is now a private home.

Between Cley and Salthouse stretch bird reserves operated by the Norfolk Naturalist's Trust. The reserves can be visited on application to the warden in Cley or to the NNT office at 72 The Close, Norwich.

Wells-next-the-Sea makes a good centre for exploring the North Norfolk Heritage Coast. A narrow-gauge steam railway runs from Wells to Little Walsingham, five miles south. In the Middle Ages, this obscure hamlet was one of the most popular places of pilgrimage in all of England. Today's pilgrims can visit the remains of the medieval priory and two holy wells. 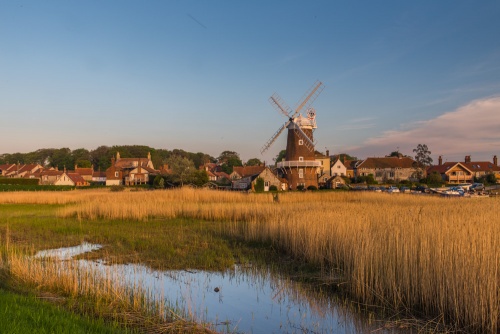 Norfolk Broads National Park
The Norfolk Broads is best known as a boating centre, and rightly so. They are made up of a multitude of broad, shallow lakes lying along five major rivers. More...

North Norfolk Coastal Path
This long-distance path follows the coast through the Norfolk Coast Area of Outstanding Natural Beauty (AONB) to Cromer. The area is rich in salt marshes, dunes, and clay cliffs, as well as quiet villages notable for their flint and brick architecture. More ...

Peddar's Way
The Peddar's Way starts on Knettishall Heath near Thetford and follows generally flat fen country across Norfolk to the sea - a distance of some 46 miles. Along the way, the path follows an old Roman road through the Norfolk countryside to the beginning of the Norfolk Coast Path near Hunstanton. More...