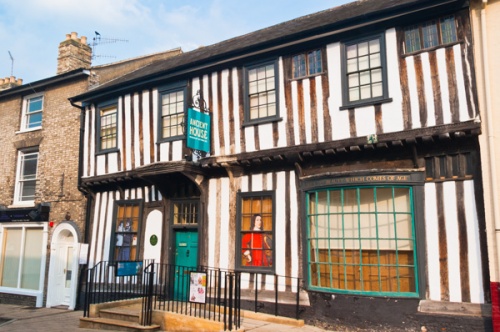 The museum has special exhibits on the ground floor focussed on the lives of two notable local residents, Maharajah Duleep Singh and Thomas Paine. Duleep Singh was the last Sikh ruler of the kingdom of the Punjab. He lost his lands and his possessions to the British but came to England to settle. He became friends with Queen Victoria and settled near Thetford. His son Prince Frederick was passionate about local history and was one of the driving forces behind the museum.

Thomas Paine was a native of Thetford, born a stone's throw from Ancient House in 1737. His pamphlets on human rights helped shape our modern ideas about democracy. His ideas were considered dangerously seditious by the British government and he eventually left Britain for the United States.

Upstairs are two rooms. One covers the rich archaeology of the Thetford area, with objects from the Celtic, Roman, Viking and modern eras. See replicas of the Thetford Treasure, a remarkable hoard of Roman jewellery discovered locally (the originals are in the British Museum).

The other exhibition tells the story of four residents of Ancient House over time; an innkeeper, plumber, watchmaker and museum caretaker.

In the case of the Ancient House Museum, the building is just as interesting as the actual museum exhibitions. This picturesque Grade II listed building is one of the finest examples of a Tudor townhouse in East Anglia. There is some uncertainty as to when the house was built. The document granting the house to the town of Thetford mentions that it was constructed in the reign of Edward IV (1461-1483), but an examination of the methods of constructions suggests a date in the first few years of the 16th century.

But who built it?

It was almost certainly built for a successful merchant, someone who wanted a house to display his wealth and status. The house was modelled after larger townhouses but was limited in scope due to the narrow space available. The house probably had a carriage entrance on one side when it was built, though no trace of this remains.

The timber-framed facade was later covered in plaster, which was considered more fashionable at the time. This plaster was removed sometime around 1867.

In 1921 the Mayor of Thetford mooted the possibility of establishing a museum of local life and consulted Prince Frederick Duleep Singh, an avid antiquarian, about the idea. The Prince bought the Ancient House and gave it to the town council to serve as a home for the new museum. The building was restored with the help of SPAB (Society for the Protection of Ancient Buildings) and again, Prince Duleep Singh contributed heavily towards the cost. The museum was opened to the public in 1924.

The house is typical of the period, with the entrance giving access to a screens passage. Off this passage are doors to a hall on one side and a large south chamber on the other. Under the south chamber is a cellar reached by a trap door. There are two smaller rooms on the first floor used as living and sleeping chambers.

The restoration of Ancient House revealed a wealth of architectural detail. The main room boasts an outstanding oak ceiling with beautifully carved detailing and a large open fireplace with an exquisitely carved oak lintel.

The most obvious external feature is a large late-Georgian bow window at ground floor level, which, though attractive, is out of character with the rest of the medieval building.

More self catering near Ancient House Museum of Thetford Life >>