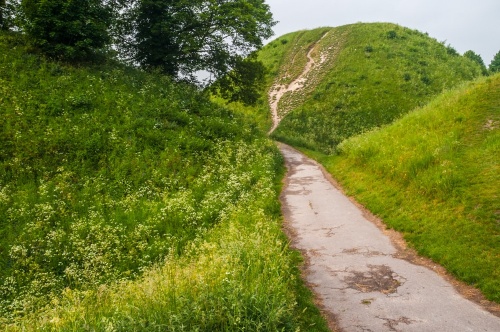 Thetford Castle
The partial remains of a Norman motte and bailey fortification are all that survive of Thetford Castle. Today only the mound remains, surrounded by extensive earthwork defences, including twin ditches of considerable height and depth. The mound was erected on top of an earlier Iron Age hillfort created around 500 BC.

The Iron Age fort consisted of two large banks and ditches built by the Iceni tribe, the ancestors of Queen Boudicca (Boadicea). Thetford was an important Iceni tribal centre. The fort was built to control traffic on the Icknield Way, the ancient trackway leading to the Norfolk coast and striking south-westerly into the heart of Britain.

The location overlooked fords across the Little Ouse and the Thet rivers. Thus one fortification controlled both land and water trading routes.

Around 1067, immediately following the Norman invasion, a timber fortification was erected inside the Iron Age earthworks. The builder was Ralph Guader, the Earl of East Anglia, or perhaps Ralph Bigod, who succeeded him as Earl in 1076 after Guader unsuccessfully rebelled against the Crown. Bigod also founded the Priory of St Mary a short distance away in 1104. 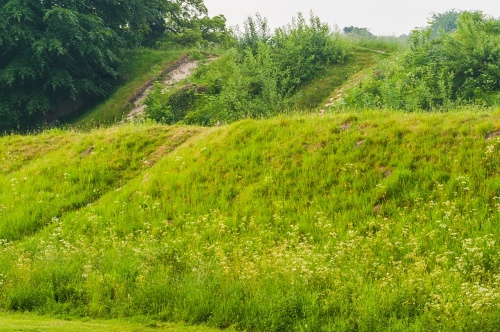 A second castle, known as Red Castle, was built in Thetford on the west side of the town during the turbulent civil war between followers of King Stephen and Queen Matilda (1135-1154). Records show that one of the two castles was destroyed in 1172-3, but which castle isn't made clear.

Thetford Castle is the largest motte in England and the second-largest manmade mound after only Silbury in Wiltshire. Archaeological investigation on the castle site turned up an Iron Age bronze 'terret' (a fitting for a horse's harness). The harness may have been used on an Iceni battle chariot about 2000 years ago. 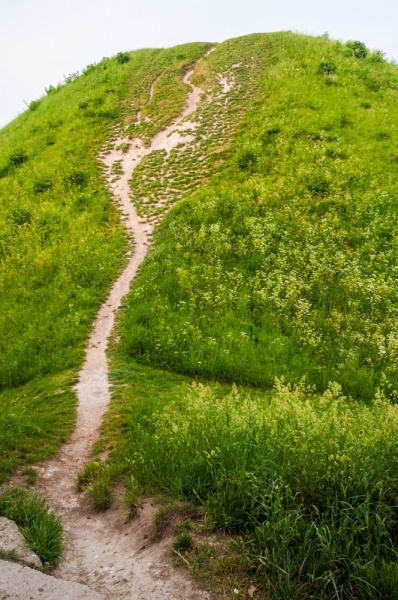 A local legend says that Thetford Castle was built by the Devil. It seems that the Devil dug the earthwork dykes at Narborough, Newmarket and Garboldisham. When he was finished digging he gave a great leap across the countryside to Thetford, where he shook his foot to get rid of clinging earth.

The earth that fell from his hoof formed the mound of Thetford Castle. Satan is said to haunt the 'Devil's Hole', a depression in the moat north-east of the castle mound. He can be summoned if you walk around the motte seven times at midnight.

Another legend says that a king once built a palace on the hill. When his enemies attacked, he buried his mansion and all its treasure, forming the high mound we see today. If you dig beneath the mound you will find the mansion still filled with the king's treasure. 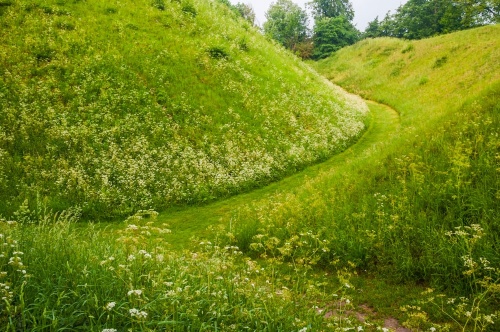 The base of the castle motte and ditch

A somewhat more believable tale says that when Thetford Priory was suppressed during the Reformation, six silver bells were carried away in secret and buried under the castle mound for safekeeping. They lie thee undisturbed to this day.

In 2017 the local council erected a fibreglass staircase onto the castle mound, allowing visitors to climb to the top without eroding the earthwork bank. This controversial staircase was labelled an 'eyesore' and 'archaeological sacrilege' by local residents, but there is no doubt that it will protect the motte from erosion.

More self catering near Thetford Castle >>