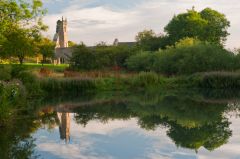 Wharram Percy is the most thoroughly studied deserted medieval village in Britain. The village lies in a wooded valley on the slopes of the Yorkshire Wolds, in an area of wonderful scenic beauty - indeed, it is worth coming here just for the scenery!
The area was first settled in the Bronze Age, though there is evidence of cultivation at Wharram Percy as early as the Neolithic period. By the Iron Age at least two farms were established here, and by the mid Roman period this had grown to five. Finds of Roman material suggests the presence of a villa nearby. The village grew through the Anglo-Saxon and Viking period, and by the 9th century there was corn mill followed by a small chapel.

During the early medieval period there were two manors at Wharram, one held by the Chamberlain family, the other by the powerful Percy's, lords of Northumberland. It was this final connection that gave the village its name, Wharram Percy (the 'Wharram' part of the name refers to the bends of the valley site).

In the 13th century the Percy's obtained the Chamberlain manor, and the Chamberlain manor house (the South Manor) fell out of use. We know there was a church at least as early as the 14th century, for in 1327 Haltemprice Priory near Hull was granted the right to name the priest here. It is an easy assumption to think that villages such as Wharram Percy were deserted because of the devastating Black Death in the mid-14th century, but this is not the case. The lord of the manor died from the plague in 1347, but the village continued to grow after a lull, reaching 30 houses by 1368, when there was a mill, corn barn, and kiln here.

But the prosperity of the growing community came to a halt when the Hilton family purchased the manor in 1403. The Hiltons began to convert the estate from farming to sheep pasture. By 1458 the population had shrunk to 16 households, and in 1500 the final four families were evicted and their houses pulled down. A solitary farm continued in operation near the church, and the estate passed through a number of absentee landlords over the following centuries. Finally in the late 18th century Sir Charles Buck built a new farmhouse and new outbuildings. We can see those buildings today, but apart from the ruined church they are all that remains of the village.

On the plateau above the church are the foundations of over 30 simple rectangular houses, their outlines easily visible. The earthworks of the North Manor are visible, as are the remains of medieval peasant houses built on top of the earlier South Manor. Interpretation panels explain the layout of the site and tell the story of its rise and eventual fall into obscurity. Beside the church is the peaceful medieval mill pond.

As for the church, it stands roofless to the sky, an evocative reminder of the long history of settlement and decay on this site. St Martins is probably the most thoroughly studied parish church in England, and foundation outlines of long-lost parts of the church show the full extent of the building at the height of its prosperity in the Middle Ages.