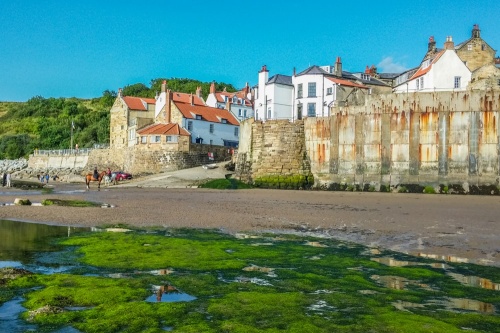 Robin Hoods Bay is one of the most picturesque coastal villages in England, a timeless place of narrow, cobbled lanes and fishermen's cottages crammed together near a secluded harbour once haunted by smugglers. The coastal scenery is stunning, and the village has become exceptionally popular as a holiday destination.

Despite the thousands of holidaymakers that descend upon the village each year, Robin Hoods Bay retains its aura of untroubled peacefulness, in part because visitor vehicles are banned from the harbour area, so if you want to enjoy the village you have to do so by walking down the steep hill to the harbour. 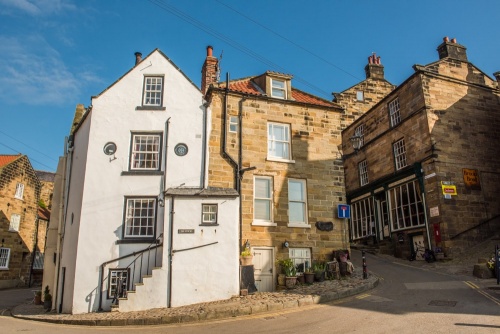 Picturesque houses near the shore

The Robin Hoods Bay area was settled as early as the Bronze age, about 1000 BCE. Burial mounds from this period can be seen on the moorland south of the village. Over a thousand years later the Romans built a signal tower at nearby Ravenscar, but the first permanent settlement was not established until the Dark ages, after the departure of the Romans.

The first settlers were Norse, and they survived through a combination of fishing and farming. The Norse settlement was slightly inland, possibly to avoid being seen by raiders along the coast.

After the Norman invasion in 1066, William the Conqueror gave the manor of Fyling to a relative, Hugh d'Avranches, Earl of Chester. The manor passed in time to the powerful Percy family, and the Percys gave the estate to Whitby Abbey.

The Norman settlement must not have amounted to much, but gradually houses were built by the shore as the threat of sea raiders diminished. The first record of a village at Robin Hoods Bay does not come until 1536, and by 1540 there were 50 houses by the harbour. When Whitby Abbey was suppressed by Henry VIII he granted the estate to the Earl of Warwick.

The village must have undergone a growth spurt, and it seems that by the late 16th century it was more important than nearby Whitby. 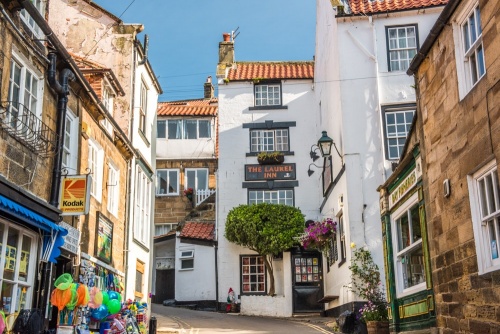 By the 18th century, Robin Hoods Bay had gained a well-earned reputation as a smuggler's haunt. The location was perfect for smuggling, with an isolated, protected harbour bounded on three sides by marsh.

It seems highly likely that most of the population was involved in smuggling in some form or another, from the fishermen seeking to augment their meagre income to farmers, clergymen, and even the local gentry. Every house had secret hiding places and tunnels linked many of the dwellings.

According to legend, a bale of silk could be transferred from the harbour to the clifftops without leaving the houses. Smugglers engaged in regular battles with the hated excise men and the smugglers' wives were known to pour boiling water from upper windows onto the heads of excise men as they passed through the narrow lanes.

From the early 19th century the picturesque village began to draw tourists. An 1847 guidebook painted a vivid picture of the village, proclaiming, 'No place of human abode can be conceived of more wild in its appearance'.

The rocky coastline proved a dangerous place for shipping, and an RNLI lifeboat station was established in 1881. The station closed in 1931. The Victorian period also brought development, with new houses being built at the top of the cliffs. Many of these Victorian houses can still be seen around the Mount Pleasant hotel and the nearby church. 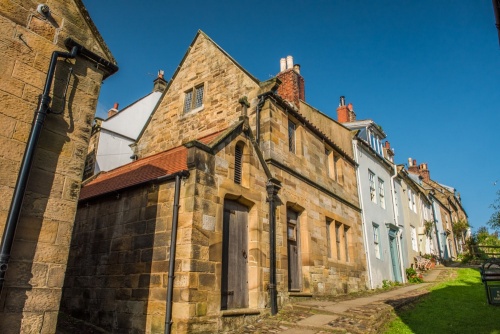 This delightful free museum is housed in a historic 19th-century building not far from the harbour. The building was purchased in 1891 by the vicar, Rev RJ Cooper, who converted the lower floor to a Coroners Room and had a mortuary built against one wall. The building also served as a Reading Room from 1900.

From 1980 the Coroners room on the ground floor has been used to display historic artefacts linked to the Bay, with exhibits on shipping, fishing, shipwrecks, rescues at sea, smuggling, the local Friendly Societies, old maps and anything connected with village life over the centuries.

The long-distance footpath known as the Coast to Coast Path was popularised by author Alfred Wainwright. The 192-mile path links the east coast of England to the west, beginning (or ending) at Robin Hoods Bay, with the western terminus at St Bees in Cumbria. A plaque on the harbourside Bay Hotel marks the official eastern end of the trail. It should come as no surprise that the hotel bar is named Wainwright's Bar. The Cleveland Way long-distance trail also passes through the village.

The origin of the name 'Robin Hood's Bay' is a mystery. What has Yorkshire coastal village to do with the famous medieval outlaw? Though the Robin Hood legend is more often associated with Nottinghamshire, there are long-standing folk tales linking the outlaw to Yorkshire.

No one knows the origin of the name but many theories have been put forward. One suggests that the name comes from the term for an ancient forest spirit, another that Robin Hood kept boats by the harbour in case he needed to make a quick escape. Another story says that the Abbot of Whitby asked Robin Hood to repel an attack by Danish raiders. 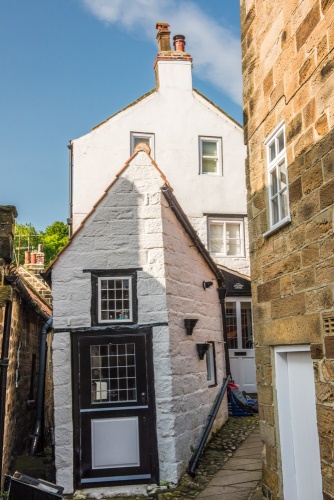 The area around Robin Hoods Bay is famous for its fossils. Vast areas of limestone and blue shale are exposed when the tide is out and exploring the rock pools along the shore in search of fossils and marine life is one of the most popular recreational activities in the bay. A selection of fossils found locally are on display in the village museum.

Visitors shouldn't drive into the harbour area (nor would they want to, as the lanes are narrow and steep). There are two visitor car parks, one by the old rail station and one just further down the hill by the Mount Pleasant hotel.

I strongly advise arriving early in the morning or late afternoon/early evening. The middle of the day, especially in summer, is so busy that you sometimes won't even find a parking spot. 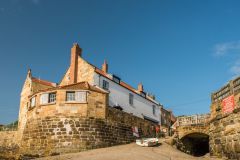 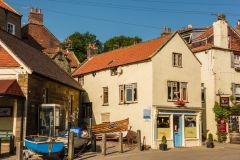 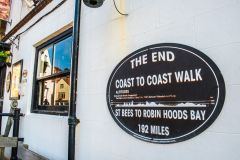 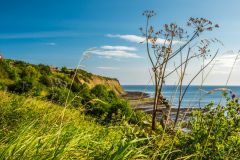