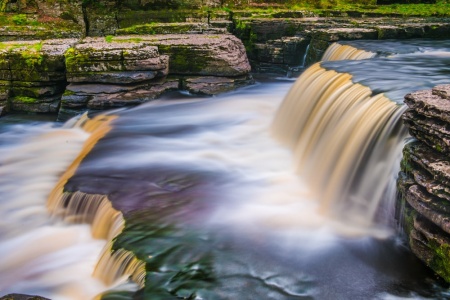 The sheep is the symbol of Yorkshire Dales National Park, and for good reason. This is sheep country, and the open fields are criss-crossed by patterns of dry stone walls marking the field boundaries. Small villages and farms cling to the sides of valleys and river banks, and the high ridge of the Pennine Range looms over the landscape.

Swaledale is the largest of the dales which make up the park, and the sheep which takes its name from this area grazes the high fells, while cattle occupy the river bottom.

There is excellent walking here, and in neighbouring Wensleydale. There is a visitor centre at Hawes, in addition to the Upper Dales Folk Museum. 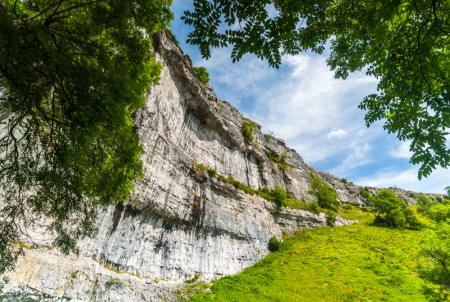 Near Hawes is Hardraw Force, an impressive waterfall with a sheer drop of 100 feet. You can actually pass right behind the fall of water, or take the steep walk to the top of Great Shunner Fell, for superb views. Further west, Malham Cove boasts a huge natural amphitheatre, as well as the National Park Information Centre at Malham village, and several enjoyable circular walks to nearby Malham Tarn.

How many dales are there?

To answer the question of how many dales there are, we turn to the Yorkshire Dales National Park official information, which lists 10 dales and three valleys (Lune Valley, Ingleton Glens and the Rawthey Valley). The 'official 10 dales' are:

Askrigg: a picturesque Dales village that served as the setting for the TV series All Creatures Great and Small
Aysgarth: a small village in Upper Wensleydale, famous for its lovely waterfalls and historic mill
Bedale: a historic market town at the eastern entrance to Swaledale
Castle Bolton: a tiny village in Swaledale, home to historic Bolton Castle
Grinton: an idyllic 'chocolate box' village in Swaledale
Hawes: a pretty market town in Wensleydale
Ingleton: a village in the western Yorkshire Dales, home to the Waterfalls Trail
Leyburn: a pretty market town, the gateway to Wensleydale and the National Park
Malham: a delightful village north of Skipton
Middleham: a small market town near Leyburn, home to Middleham Castle
Muker: an attractive village in Swaledale with a lovely Elizabethan church
Pateley Bridge: an attractive market town in Nidderdale, in the northern Yorkshire Dales
Reeth: the 'capital of Swaledale' at the junction of Swaledale and Arkengarthdale
Skipton: a market town in the south-eastern corner of the National Park, home to Skipton Castle