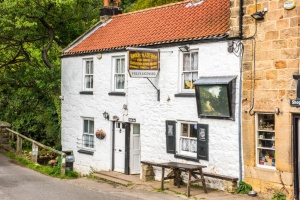 One of the smallest of the National Parks, the North York Moors comprise a high plateau bounded on the north by the Plain of Cleveland and on the south by the vales of Pickering and York. The park is at its scenic best in August and September, when the purple heather is in bloom.

On the north and south the moors are etched by deep valleys, or dales, and the eastern boundary of the park ends in a spectacular coastline.

One of the most popular dales with visitors is Farndale, where the springtime daffodil displays bring people flocking to the walk between Low Mill and Church houses.

For a memorable walk, trace the course of the defunct Rosedale Railway over the moors from Rosedale to Ingleby Greenhow. These high moors are home to a variety of birdlife, including curlews, golden plovers, and merlins. 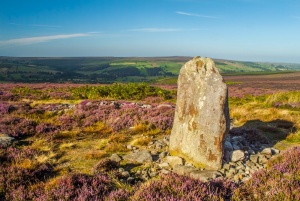 The Cleveland Way National Trail hugs the rim of the moor, and a trip along it provides excellent views. Along the trail is the distinctive Roseberry Topping, which looks, if you use your imagination, like a miniature version of the Matterhorn. This region is home to Captain Cook, whose father worked on a farm at the foot of the Topping.

Moors Centre (Danby) - information centre for the park, with 13 acres of woods and meadow walks.
Esk Valley Walk - 33-mile trail between Farndale Moor and Whitby following the route of the Esk Valley Railway and the Esk river to the sea.
Ravenscar Geological Trail - walks of 2.5 and 4.5 miles following the course of the Peak Fault, past disused alum quarries. The area is rich in fossils. 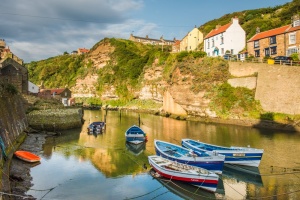