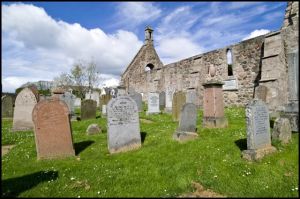 Kincardine O'Neil Auld Kirk
Kincardine O'Neil Auld Kirk is a ruined 13th-14th century church built to serve a hospital. The hospital was torn down in the 17th century, but the roofless church remains, with the interior turned into a burial ground.
History
In the 5th century St Erchard, a disciple of St Ternan, brought Christianity to this area of Aberdeenshire. He built a church beside the River Dee, on or near the site now occupied by the roofless ruin of a 14th-century church. St Erchard is said to have been buried within the church.

In 1233 Alan the Durward founded a Hospital of St Mary at Kincardine O'Neil. Then Duncan, Earl of Fife, founded, or re-founded, a church here, attached to the hospital, and this was, in turn, granted to Aberdeen Cathedral by Alexander Kyninmund, Bishop of Aberdeen, in the middle of the 14th century. The church served the hospital, linked to the east end of the building. It had a thatched roof, but this was replaced by a slate roof following a fire in 1733.

The hospital fell into disuse and was torn down in 1625, but the church continued to serve the local community. A new church was built in 1862 and the Auld Kirk was allowed to decay. The church interior was then used as a burial ground.

The simple roofless building has only one small window, which would have made the interior very dark but would have helped the church retain heat. There was one doorway in the north, now very worn. This was blocked up at some point and a new doorway inserted in the west gable end sometime in the 18th century. On top of the gable is a small bell-cote, but the bell is gone, removed to the new Victorian church in 1865.

The walls are 4 feet thick, and the building measures 67' long by 27' wide. The east wall retains a pair of windows from the medieval hospital. It appears that the hospital was at least as long as the church, with its windows arranged so that inmates could look into the church through the church's east wall.

This wonderful cottage is located in Kincardine O'Neil, Scotland and can sleep six people in three bedrooms.
Sleeps 6