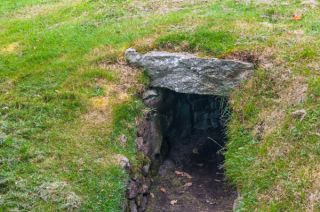 Just east of the village of Tarland is Culsh Earth House. Despite the name, the 'earth house' is not a house meant for dwelling, but an underground storage area. In the south west of Britain these chambers are called souterrains. The site at Culsh was probably used in the 1st and 2nd centuries AD.
Since this coincides roughly with the Roman push into Scotland it has been suggested that the earth house may have been used as a grain store for the Roman army - or more likely by families not averse to selling grain to the invading army. Most earth houses were filled in after this period as if they were no longer required, which does make the Roman link at least plausible.

The earth house entrance is simply a level passage into a sloping hillside. The opening is not protected in any way, but it is perfectly dry and secure once you get past the entrance. You can crawl on your hands and knees to the end of the curving passage or waddle like a duck if you aren't too tall! You can see into the interior reasonable well, but a torch would be useful for extra illumination.

Do be aware that there is no easy place to park to access the earth house; though there are a brown tourist sign and an information board, there is no obvious parking area aside from pulling onto a small area of grassy verge; just make sure you don't block the driveway of the closest property. 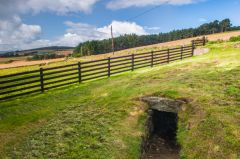 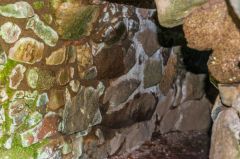 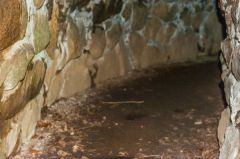 About Culsh Earth-House
Address: Culsh, Tarland, Aberdeenshire, Scotland
Attraction Type: Prehistoric Site
Location: 1 m (1.6 km) south of Tarland, off the B9119. The souterrain is between the road and farm buildings.