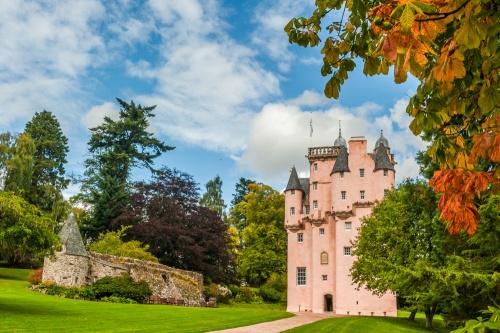 Craigievar Castle
If ever a Scottish castle deserved the moniker 'fairy tale', it is Craigievar. In fact, rumour has it that Walt Disney used Craigievar as the model for the Disney castle. Certainly, there is something magical about the proliferation of towers and turrets that spring from the earlier foundations of this attractive fortified house. And make no mistake, this is a tower 'house' rather than a castle in the traditional sense.

The history of Craigievar goes back to at least the 14th century. We know that the Mortimer family held the estate since 1376, but it was not until 1575 that Sir John Mortimer began the process of transforming the house into the impressive residence we see today. Sir John was rising in society, and he wanted a house that befitted his rank of baron. 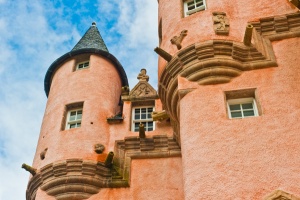 Turrets and corbels on
the entrance facade

The initial tower house was plain, rising in straight lines to the height of the current 4th storey. The staunchly Catholic Mortimers built a chapel into their new home, but being no fools, they disguised the nature of the chapel so that no trace of it could be seen from outside; a wise move for the turbulent years of the late 16th century, when the passions aroused by the Reformation were at their fullest.

The story of Craigievar really begins in 1610, when it was purchased by William Forbes of Menie, brother of the Bishop of Aberdeen.

Forbes, though a young man, had made a fortune by importing wood from the Baltic region. In the course of his merchant efforts, he visited the port of Danzig so many times that he became known as 'Danzig Willie'. Forbes married Margaret Woodward, and their initials can be found throughout the castle.

Danzig Willie wanted Craigievar to reflect his wealth and status, so he removed the upper floors and rebuilt them on a grand scale. 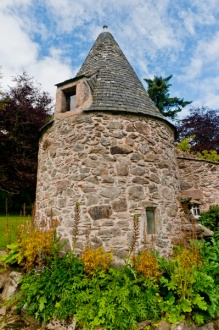 The upper floors had a larger footprint than the lower floors, so Forbes used a series of carved corbels to support the larger upper chambers, which he topped with conical turrets and viewing platforms with balustrades. The effect - both inside and out - combines Scottish tradition with Renaissance style.

The interiors of Forbes's mansion were decorated with a series of fabulous plasterwork ceilings. The most impressive of these is in the great hall, where the ceiling is embellished with classical elements and heraldic symbols. The hall also retains its wonderful Jacobean woodwork. Craigievar was largely complete by the time Sir William died in 1627.

One of the most famous descendants of Danzig Willie to leave his mark on Craigievar was 'Red' Sir John, his grandson, whose moniker referred both to his red hair and his violent disposition. Red Sir John was said to be responsible for Craigievar's resident ghost. 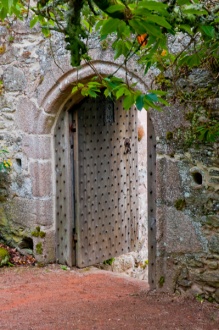 Rustic doorway in the garden

According to the tale, as related to me by one of the very friendly guides, Sir John's daughter fell in love with a young member of the Gordon family, old enemies of the Forbes clan. The young man came to call on his love, climbing to the Blue Bedroom on the fourth floor, only to be met by Red Sir John.

The enraged father put a sword to the young man's throat and forced him to leap from the window. The fall was too great, and the young man died. Ever since, according to the tales, ghostly footsteps can be heard, crossing the Blue Room to the window behind the bed.

But on to more cheerful things; the castle remained in the hands of the Forbes family, though reduced family finances meant that it suffered over time and was in sad need of restoration.

Finally, in the mid 20th century the castle was purchased by the National Trust for Scotland, after a public appeal for funds to save the castle for future generations. Today, Craigievar is one of the best-loved properties owned by the Trust, a marvellous example of a Scottish tower house.

The only way to explore Craigievar is by guided tour, in small groups of no more than 12 at a time. When you see the size of the rooms on display and the narrow, winding stairs and low ceilings in places it is easy to see why! However, the tours are very informative and well worth it.

Unlike many historic properties, there are not really any extensive gardens around the house, but you can walk through the estate, which is full of interesting trees, and the views across the surrounding countryside are fabulous on a sunny day.

More self catering near Craigievar Castle >>