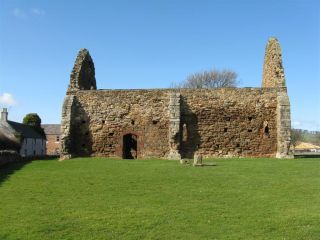 St Martins Kirk, Haddington
The ruined nave is all that remains of the early 12th-century church of St Martin in the Nungait, on the fringes of Haddington.
Very few 12th-century churches survive in Scotland, so St Martin's is a rare relic of the early medieval period. St Martin's was owned by the nunnery of St Mary, a Cistercian foundation less than a mile to the east. Protestant Reformer John Knox was born in Nungait and very probably attended St Martin's as a child.

The roofless nave is all that remains of the church. The chancel was torn down at the Reformation, leaving only the simple rectangular structure we see now. The chancel arch in the east wall still stands, and there is a Romanesque piscina to the south of the arch, and round-headed windows and door openings.

One curious feature is a number of square holes in the walls. You would assume they are putlog holes for bracing scaffolding during construction, but Historic Scotland, who look after the site, don't seem to be convinced. But if they aren't meant for scaffolding, then what are they? St Martin's is an open site, accessible at any reasonable time.