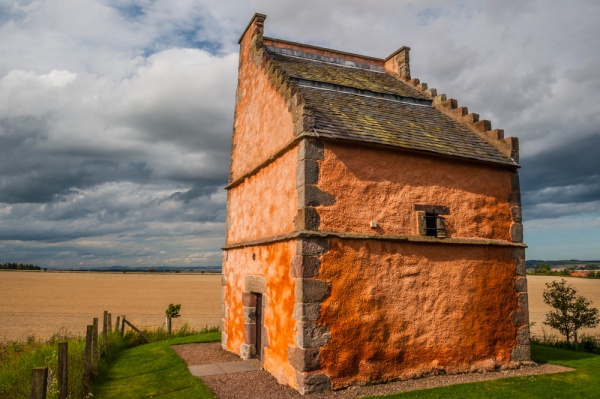 The small East Lothian village of Athelstaneford can claim with some pride to be the birthplace of the Saltire, Scotland's national flag. The saltire, or St Andrew's Cross, is the oldest flag in Europe. It originated at the time of a 9th century battle between an army Picts and Angles from Northumbria, fought in the fields near the village around the year AD 832.

In the early 9th century the Lothian area was part of Northumbrian territory. King Angus of the Picts, with his allies the Scots, marched into Lothian, where he found himself surrounded by a larger force of Angles under King Athelstan.

Angus not surprisingly feared defeat by the larger force of Angles, and led his men in a prayer for deliverance from almost certain death. As if in answer to his prayers the clouds above him formed the shape of a saltire; a diagonal cross of white clouds against a background of blue sky. The diagonal cross was known as St Andrew's Cross, for the saint had been martyred on a diagonal cross. 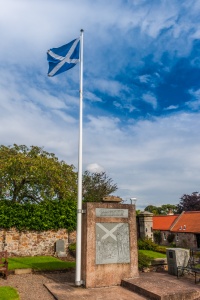 Angus vowed that if St Andrew helped him to victory he would make him the patron saint of all Scotland. Against all odds, the Picts and their allies defeated the larger force of Angles.

Angus, true to his word, made St Andrew the patron saint of Scotland and St Andrew's Cross was adopted as the flag of Scotland.

The dramatic story of the battle and the history of the Saltire is told in the National Flag Heritage Centre, a small museum housed in a historic 16th-century doocot behind the parish church of Athelstaneford.

The doocot, with its distinctive crow-stepped gable, was built in 1583 and restored in 1996. Within the doocot is an audio-visual presentation on the battle and the flag. A few steps away in the churchyard is the Saltire Memorial, a striking granite monument topped by a flagpole from which the saltire flies permanently.

On the base of the monument is a carved granite panel depicting the two armies facing each other, with a St Andrew's Cross in the cloudy sky above. A flag flies 24 hours a day, and is floodlit at night.

The inscription on the memorial's base reads;

"Tradition says that near this place in times remote Pictish and Scottish warriors about to defeat an army of Northumbrians, saw against a blue sky a great white cross like Saint Andrew’s, and in its image made a banner which became the flag of Scotland."

The doocot is worth a visit in its own right. The Scottish Flag Trust, who maintain the site, calls doocots the medieval equivalent of a deep-freeze, used for keeping pigeons through the winter, when food was sparse and fresh meat hard to come by.

Doocots were once a common sight in Scotland, but they gradually disappeared with the popularity of the humble turnip, which made it possible for farmers to feed their animals through the winter rather than slaughter them. Pigeons disappeared from the winter menu and doocots were allowed to decay. 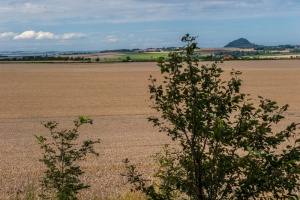 Looking over the battlefield from the doocot

The Athelstaneford doocot is one of the few surviving 16th-century examples in Scotland. It was built by George Hepburn, whose coat of arms appears over the Door. George's son Sir John Hepburn was the first colonel of the Royal Scots regiment (the First of Foot). The regiment has used the Saltire as its symbol for over 300 years.

Outside the doocot is an interpretive panel looking across farm fields to the battle site. The panel explains the battle and historians' interpretation of how events unfolded.

The first church at Athelstaneford was built in 1176 by Ada, mother of King William the Lion. The 12th-century church was rebuilt in 1780, giving us the building we see today. Within the church is a richly coloured stained glass window depicting St Andrew, and The Book of the Saltire, an ornate chronicle of the historic origins of the Saltire.

When we visited there was an exhibit on the popular Scottish author Nigel Tranter, who was instrumental in establishing the National Flag Heritage Centre. Tranter and his wife May were married in Athelstaneford church in 1933 and his best man, Eric Stevenson, designed the battle scene on the Saltire Memorial.

In the churchyard are a large number of historic monuments including that of Adam Skirving (1719-1803) who wrote the popular ballad “Hey, Johnny Cope”, telling the story of how Jacobite soldiers defeated a royal army under Sir John Cope at the Battle of Prestonpans in 1745. It seems appropriate that the author of a popular anti-English song should be buried near the Saltire Memorial!

The Heritage Centre is open daily from spring through autumn, and is free to enter. The church is usually open daily, and the Saltire Memorial is accessible at any time.

We quite enjoyed our visit, once we realised that we needed to go around the end of the church to find the doocot, which wasn't immediately visible from the road. It should not take long to visit the Centre, for the doocot is quite small and the audio-visual presentation does not take long to view. I definitely suggest popping into the church while you are there; I quite enjoyed the Nigel Tranter exhibit when we were there. 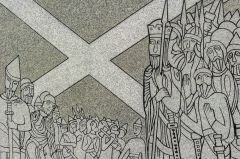 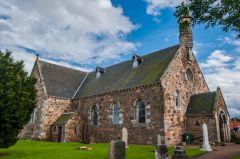 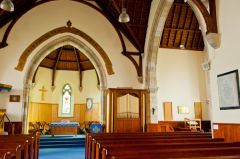