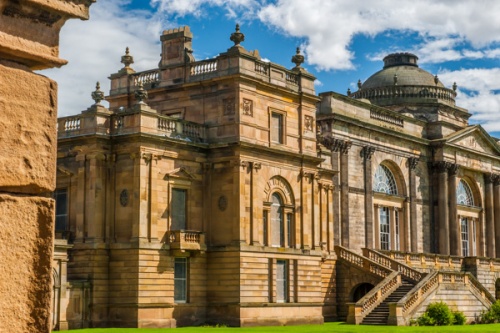 Gosford House is a magnificent neoclassical house rebuilt in 1890 by architect William Young for the 10th Earl of Wemyss after an earlier Robert Adam design had been demolished. The main feature is a superb 3 storey high Marble Hall with a double staircase, central dome and ornate plasterwork. The interiors are a mix of Adam's original neoclassical elegance and the 10th Earl's Italianate tastes.

The original Gosford House was one of the last projects undertaken by Robert Adam before his death in 1792. The house, designed for the 7th Earl, was not actually completed until 1800, some 8 years after Adam's death. The 8th Earl wasted no time in knocking down Adam's wings, but the 10th Earl had them rebuilt.

The British Army occupied Gosford during the Second World War and managed to burn down the main rooms of the central block. You can still see the marks made by the fire on some of the gilded mirrors in one of the rooms.

The state rooms are full of fine art, but it is, without a doubt, the striking Marble Hall which will live long in your memory after a visit.

Gosford has only recently begun opening to the public for guided tours during the summer months. When we visited we met a couple who said they'd been visiting the area for 40 years and had never seen the house open before!

It is also available for group tours at other times by pre-arrangement. aside from the house, there are extensive walks through the surrounding parkland, where you will find a series of lakes, a grotto, a rare Curling House, and the amazing family mausoleum (exterior viewing only). This latter is a stunning building that looks for all the world like an Egyptian pyramid magically transplanted to a British setting.

More self catering near Gosford House >>