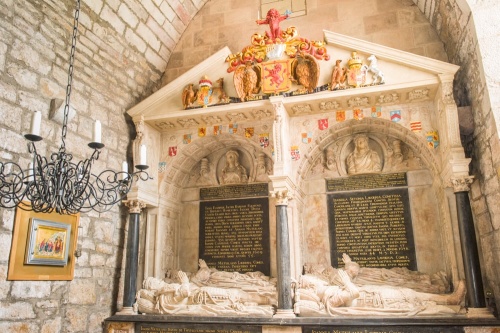 The Lauderdale Aisle is the former sacristy of the great medieval church of Haddington St Mary's. The parish church of Haddington was one of the largest and finest churches erected in Scotland during the late 14th century, equalling Edinburgh's St Giles in size and easily the equal of most Scottish cathedrals.

There was a church on the site since at least 1139, when it was granted by David I to St Andrews. That Norman building stood where the choir of the present church now stands.

Edward III destroyed the Norman church in 1356, and it was refounded as a collegiate church around 1540. The 'new' church was a large building on a cruciform plan, made of red and grey sandstone. The church stretched 206 feet, and the total width, including transepts, was 113 feet. In other words, it was a very large and imposing building. 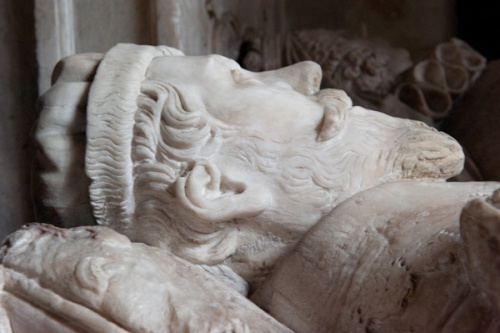 Within the Lauderdale Aisle is a superb Renaissance monument of beautifully carved marble, in memory of John Maitland, Lord Thirlstane. Maitland (d. 1595) served as Chancellor of Scotland under James V. The memorial is ornamented with alabaster effigies to Maitland, his wife, Jane Fleming, and their son John, the 1st Earl of Lauderdale. Beneath the monument is the Lauderdale family vault.

The aisle is open during the regular church opening hours (when I visited this was most afternoons from May-September). St Mary's is a stunning church, obviously much loved and cared for. Volunteer guides were available when I visited, and they were very helpful and eager to offer information about the church.

A sign at the entrance to the aisle indicates that it is reserved for prayer, so please be quiet and considerate when entering!

In truth, the Aisle was much smaller than I had expected. One end is taken up by a small altar, while the entire side facing you is occupied by the enormous Maitland memorial. This is truly a magnificent creation, which seems almost more gilt than stone! For more see the St Mary's Haddington church website. 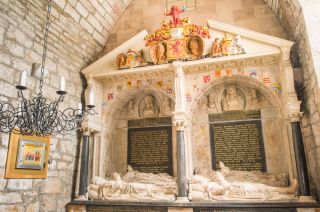 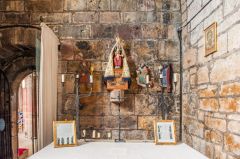 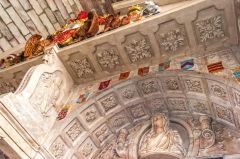 More self catering near Lauderdale Aisle >>