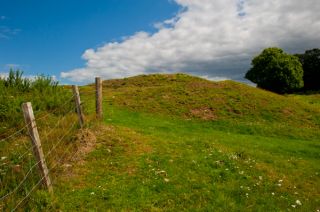 Heritage Scotland, who look after Chesters, call it an Iron Age Fort. That may be slightly misleading, for the site is quite different from the usual sort of hill fort. For a start, the hilltop earthworks are overlooked by a nearby hill, making it a very poor location for a defensive fort. It would have been very easy for anyone occupying the higher hill to launch volleys of slingshot stone down upon the inhabitants of Chesters.
That is one of the main reasons to think that Chesters was not intended as a defensive hill fort but as a permanent village. If so, it was a village that had little need for defence. Why would that be? Well, the best theory is that the site was occupied during the Roman period, by the Votadini, a tribe friendly to the Romans. With the might of Rome behind them, perhaps the inhabitants of Chesters felt no need for an elaborate set of defences. Perhaps, instead, Chesters was intended to make a 'statement', an expression of status.

Whatever the reason for the peculiar location, the earthwork approaches to the settlement are quite elaborate, with a system of overlapping ditches and banks on each elongated end of a low hill. Within the earthworks is evidence of wooden buildings, belonging to two distinct phases of occupation. Some of the later wooden buildings overlay the earthen ramparts.

There are several other Iron Age enclosures in the area and it seems possible they were part of an agricultural system of subdivided plots.

The earthworks are quite worn by erosion and the passage of time. I couldn't say that Chesters is the most impressive Iron Age site I've ever visited, but it is quite interesting to speculate as to the reasons behind the peculiar location chosen for the village!

Reaching Chesters is fairly easy; it is located up a narrow lane off the minor road that links the B1377 and the B1343, about a mile west of Drem. There is a small parking area at the end of the lane, then a very short uphill walk to the site. 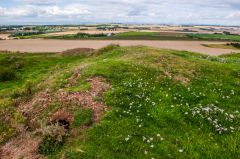 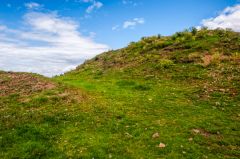 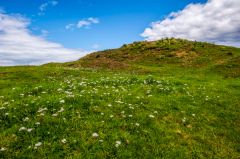