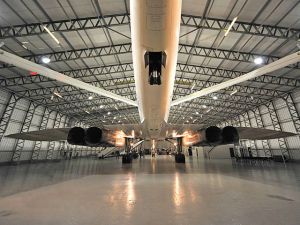 National Museum of Flight
This outstation of the National Museums of Scotland covers the history of aviation in Scotland. Aircraft on display range from a 1930 De Haviland Puss Moth monoplane to a 1945 Spitfire. Exhibits include trainer cockpits, engines, scale models and the Battle of Britain.
What to See
The museum occupies WWII buildings used by FRAF East Fortune at the East Fortune Airfield in East Lothian. The wartime buildings make up perhaps the finest group of unaltered WWI airfield structures in Britain, and the airfield is a scheduled ancient monument in its own right.

Perhaps the star exhibit is the earliest; in 1909 the Royal Scottish Museum acquired the Hawk glider used by aviation pioneer Percy Pitcher. The Hawk glider was the very first aircraft owned by any museum in Britain. Several more aircraft were acquired in the 1920s, then in 1971, the MOD gave the museum a Supermarine Spitfire XVI, which was stored at the East Fortune airfield. More gifts of aircraft the following year led the Royal Scottish Museum to open a new museum dedicated to aviation heritage.

The collections have since expanded a great rate, with a huge number of aircraft, from military, commercial, and recreational planes.

Collection highlights include 'Scotland's Concorde', or if you prefer its official designation, the Aerospatiale-BAC Concorde G-BOAA. Visitors can walk under and through the aircraft interior, and see a display on the history of the Concorde complete with prototype models, aircraft seats and engines.

Aside from complete planes, the museum has a large number of engines, wings, radar equipment, and model aircraft, including several made for testing the aerodynamics of new designs. See vintage stewardess uniforms, military uniforms, old photos, airborne weapons such as cannons and bombs, and a display of military medals and decorations.

Explore a reconstructed 1950s shop, and walk through the fuselage of historic aircraft such as the British Aerospace Jetstream twin-turboprop. One hangar houses aircraft in the process of being restored. The 'Jet Age' exhibit tells the story of the jet engine and how it changed aviation history. A special display shows how the East Fortune airfield developed through time, and how it served during WWII. A nearby building houses a restored parachute packing store.

The museum puts on a very popular air show each year, usually on a weekend in late July.

More self catering near National Museum of Flight >>

More bed and breakfasts near National Museum of Flight >>