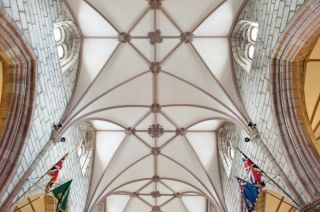 St Mary's Church in Haddington is known as 'The Lamp of Lothian', a testament to the architectural and spiritual significance of this, the largest parish church in Scotland. The current church dates to the 14th century and replaces an earlier building destroyed when Haddington was sacked and burned by the English in 1356.
Early History
The first church at Haddington was begun in 1139 when the Burgh of Haddington was granted to Ada, a daughter-in-law of King David of Scotland. A group of Franciscan friars established a priory here around 1242. The choir of the Franciscan church was known as The Lamp of Lothian because of the clarity and purity of the light.

Haddington once again suffered at the hands of English invaders when the town was occupied during Henry VIII's 'Rough Wooing', when he attempted to wed his young son to the equally young Mary, Queen of Scots. Reformer John Knox - possibly a native of Haddington - helped restore St Mary's nave in 1561. The nave served as the parish church for over 400 years, while the choir and transepts remained roofless and open to the elements. Further restorations in the Victorian period and the 20th century finally brought this marvellous medieval church back to its original glory. The restoration of St Marys has been called one of the most important church restorations of the 20th century.

The most notable feature of St Mary's is the 16th century Lauderdale Aisle, built onto the north side of the choir. This small chapel with a burial vault beneath it was established as a chapel for the Maitland family of Thirlstane. Over 1000 pilgrims come to the Lauderdale Aisle each year. The centrepiece of the chapel is a grandiose alabaster and gilt memorial to John Maitland, Chancellor to James VI, and his son, also named John Maitland, the 1st Earl of Lauderdale.

Among the surviving medieval features elsewhere in the church is a beautifully carved Green Man on a corbel supporting the west gallery. In the choir is a memorial to Jane Welsh, wife of writer Thomas Carlyle. Welsh was the daughter of Dr John Welsh of Haddington. More modern are the stained glass windows, including two excellent examples designed by Edward Burne-Jones, one of the leading lights of the Arts and Crafts movement.