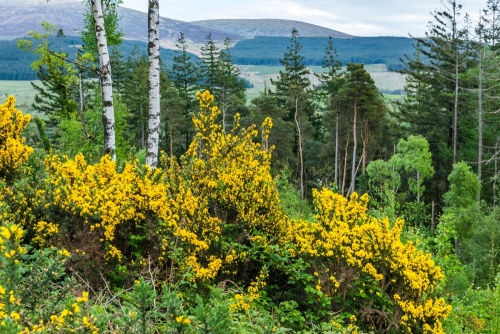 The Galloway Forest Park is a huge area of relatively unspoilt countryside taking in parts of Strathclyde and Dumfries and Galloway, operated by the Forestry Commission Scotland. The countryside is a mix of Southern Uplands scenery, with wooded mountains, hills, lochs and streams.

Deer, goats, otters, wild cats, and other wildlife inhabit the forested areas. Almost any imaginable outdoor activity is catered for, including climbing, walking, fishing, camping, and swimming. A red deer park and a wild goat park are contained within the Forest Park. There is a special viewing platform where you can spot native black grouse.

The park has been dubbed 'Dark Sky Park,' the very first of its kind in Europe. The vast area of uninhabited land means that there are no lights from settlements, making the park a perfect place for stargazing without the need for a telescope. It is estimated that over 7,000 stars can be seen from within the park.

If you'd like to delve deeper into the experience of stargazing, visit the Scottish Dark Sky Observatory at Craigengillan, near Dalmellington, on the edge of the park. 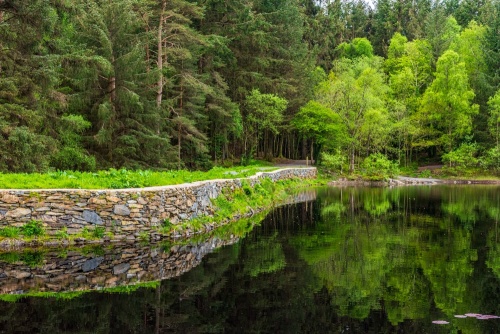 Galloway Forest Park covers a huge area of roughly 300 square miles, containing over 250 lochs and over one million trees. The trees are a major source of income, and over 500,000 tonnes of timber are harvested every year. One outcome of all the forestry activity is that there are now a large number of forest roads and tracks set aside for recreational activities.

There are visiting centres at Glen Trool, Clatteringshaws, and Kirroughtree. The main visitor centre is at Kirroughtree, near Newton Stewart. Here you will find a wildlife hide, an adventure play park, an orienteering course, cycling trails, and woodland walks.

Mountain bikers will enjoy the Sevenstanes trails, with options for novice and experienced riders. 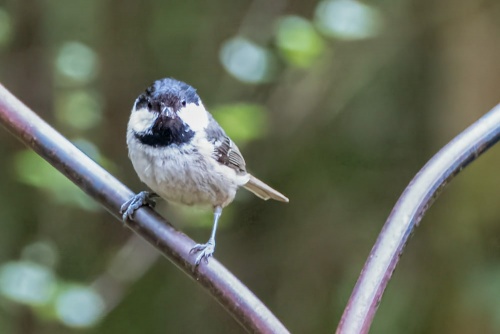 Enjoy the wildlife hide at Kirroughtree

History in the Park

Though the Forest Park is first and foremost an exceptional recreational area and a place to enjoy natural beauty, it is also full of historic sites, including not one, but two memorials to Robert Bruce. Just to confuse matters, both memorials are commonly known as Bruce's Stone. The first is Bruce's Stone (sometimes called the Bruce Memorial) in Glen Trool, and the second is another Bruce's Stone at Clatteringshaws.

On a hillside above Loch Trool stands a memorial cairn. The cairn looks over the loch towards the site of the Battle of Glen Trool, where in April 1307 a Scottish force under Robert Bruce defeated a much larger English army commanded by Aymer de Valence. Though the battle was little more than a skirmish, it provided Bruce with a much-needed propaganda victory after earlier defeats at Methven and Dalry.

For more, see our article on Bruce's Stone. 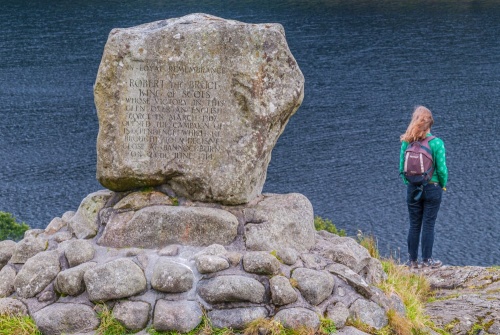 A short stroll along the shore of the loch from the visitor centre on the A712 leads you to a large misshapen boulder known as Bruce's Stone. In March 1307, Scots under Robert Bruce fell upon a force of 300 English soldiers while they slept (some sources claim that the Scots were not led by Robert Bruce but by his brother Edward).

Whichever Bruce was in charge, the Scots routed the English force, and after the fighting had stopped and his men were picking over the bodies of their slain enemies, Bruce rested against a boulder overlooking the battlefield. Unlike the Glen Trool memorial, the Clatteringshaws stone is a natural feature. As for the battle site, it is now submerged beneath the waters of Clatteringshaws Loch. 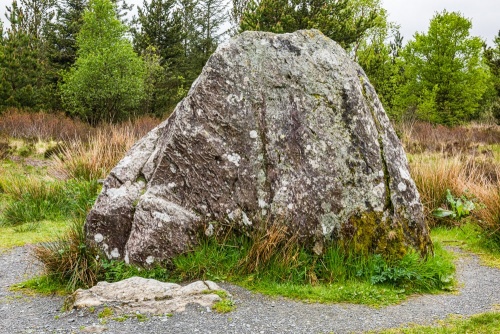 Clatteringshaws is one of the best places in the park to enjoy stargazing, so plan to come on a cloudless night!

The bridge was built in 1789 to replace the Old Bridge of Dee, now lost beneath the waters of the loch. The bridge is listed Grade B by Historic Environment Scotland. 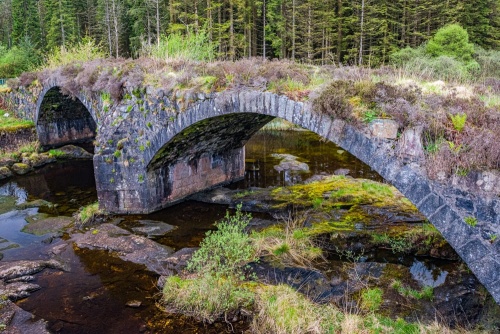 A reminder of more recent historic events is the Covenanters Memorial, commemorating local Covenanters who died for their religious beliefs during the religious upheavals of the 17th century.

On the north side of the A712 between Newton Stewart and New Galloway is the Wild Goat Park, home to a herd of 50 British Primitive Goats. Several hundred more wild goats live outside the enclosed area. 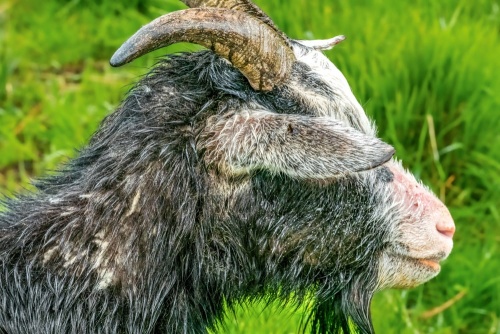 There is a large car park directly beside a feeding station, so chances are good that you will be able to see some of the wild goats up close. When we stopped, in the middle of a rain shower, the goats crowded up to the fence, hoping that we had food for them!

A few miles east of the Wild Goat Park is the Red Deer Range, an enclosed area that is home to about 25 red deer. There is a hide so you can see the deer without disturbing them, and a feeding station near the hide to draw the deer to this area. In our experience, the deer are so accustomed to humans that you don't need the hide. From the parking area, a trail leads through woodland to Cally Motte, a 12th-century fortification. 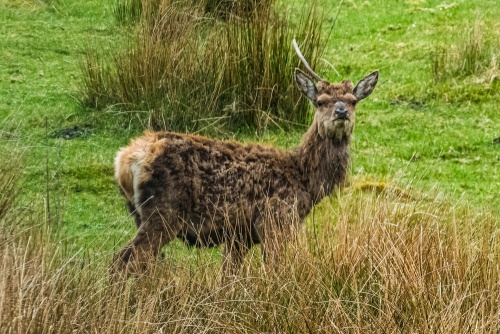 At Talnotry, just west of the Wild Goat Park, you can take a very short stroll up a tributary of Palnure Burn to see the Grey Mare's Tail Waterfall, where the water falls in a series of drops to the valley floor. You can continue on up the trail to Black Loch, a quiet inland loch. 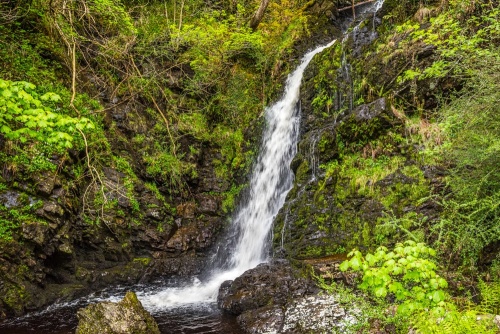 From the same parking area, a circular trail leads up a steep hill to Murray's Monument, a striking obelisk erected in 1835 to commemorate the life of a local shepherd boy named Alexander Murray, who rose from humble beginnings to become a Professor of Oriental Languages at Edinburgh University. 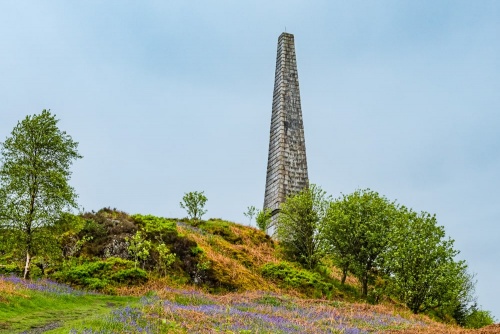 Alexander Murray was born at Dunkitterick Cottage, a mile east along the road, in 1775. A trail leads along a small burn, past tumbling waterfalls, to the roofless ruin of the cottage where Murray was born, and that the family shared with their animals. The setting is stunning, and it will take no more than ten minutes to reach the cottage from the car park. 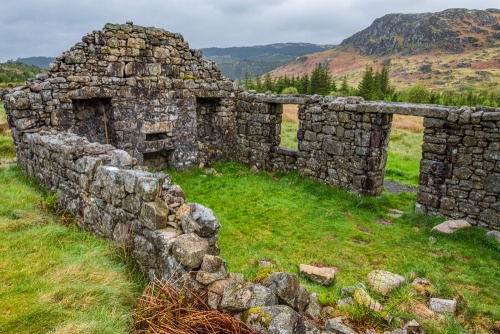 In the northern section of the Forest Park is the Carrick Forest Drive, linking Loch Doon and Stinchar Bridge. This area is the best in the park for spotting black grouse. On the shore of the loch is Loch Doon Castle, a 13th-century fortress that originally stood on an island in the loch.

When a hydroelectric project raised the water level, the castle was threatened with destruction, but it was disassembled stone by stone and rebuilt on dry land. The castle may have been built by the Earl of Carrick, a direct ancestor of Robert Bruce. 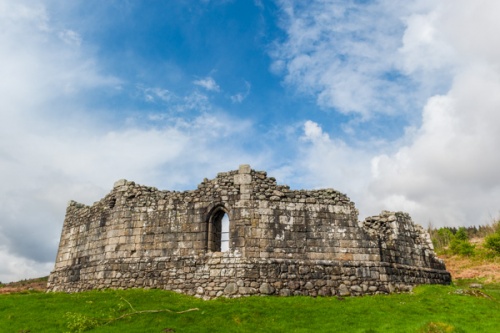 There are four walking trails at Kirroughtree. The shortest, the Wild Watch Trail, loops through woodland to a a hide where there are feeding stations for red squirrels and for birds. We counted seven species of birds in just ten minutes watching from the hide.

The other, longer routes range from 1.5 miles to 4.25 miles (2.5km to 7km). The Anniversary Cairn Trail climbs to mature woodland to a triangular cairn erected to mark the 5th Anniversary of the Galloway Forest Park. It then descends to Bruntis Loch, a peaceful inland loch. The trail inks with the Larg Hill Trail, a circuit through woods and around Larg Hill, where you will be rewarded with stunning views. 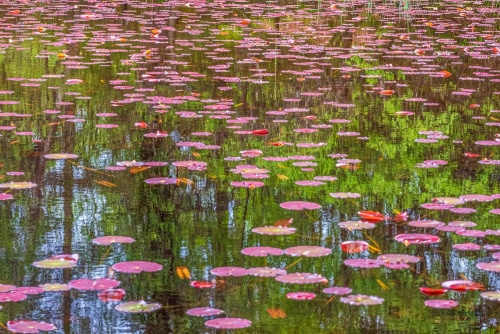 This is a beautiful area for countryside walks and for mountain biking.

Note that there is a parking charge for the three visitor centres. 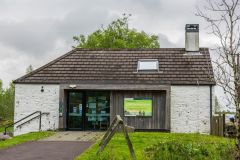 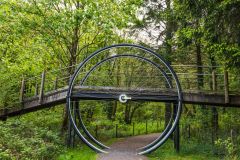 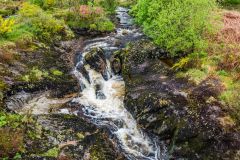 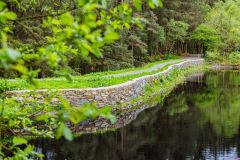 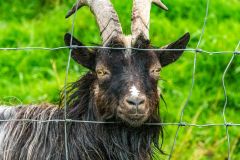 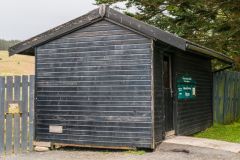 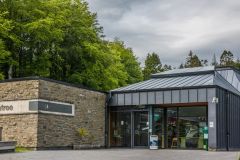 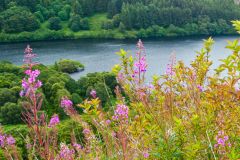 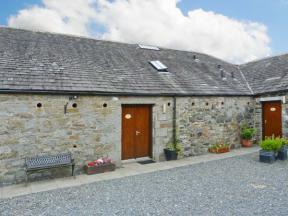 This terraced cottage is located near to Newton Stewart and can sleep four people in two bedrooms.
Sleeps 4 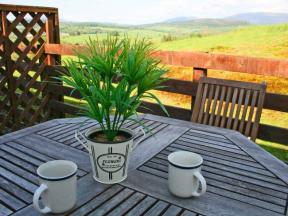 Ideal for lovers of the great outdoors enjoying spectacular views over some of the most stunning scenery in Galloway. The lively market town of Newton Stewart is 5 minutes away …
Sleeps 4