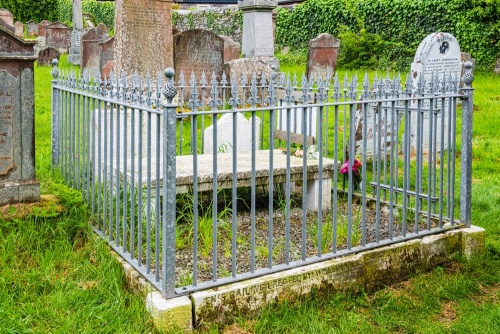 On 11 May 1685 two women, Margaret Wilson (aged 18) and Margaret McLachlan (aged 63), were tied to stakes in the rising waters of the River Bladnoch, near Wigtown, and left to drown. The women were executed for their refusal to take the Oath of Abjuration and acknowledge James VII as head of the Scottish church.

Three memorials survive to remind modern visitors of the Wigtown Martyrs; three gravestones in the burial ground of the parish church at the junction of Church Lane and Bank Street, a monument atop Windy Hill, and the Martyrs' Stake, marking the site where Wilson and McLachlan met their fate.

The 'Wigtown Martyrs' were buried in the churchyard at Wigtown, along with three men who were hanged for their religious beliefs later that same year. All five were Covenanters, a catch-all term for those who supported the Scottish Presbyterian church against attempts by the monarchy to impose an English-style Anglican form of worship.

Throughout the 17th century successive monarchs tried to impose an Episcopalian style of worship in Scotland, with the monarch at the head of the church and bishops who appointed parish priests. By contrast, Scottish Presbyterians believed that there was no earthly head of the church and that parishioners should appoint their own ministers. 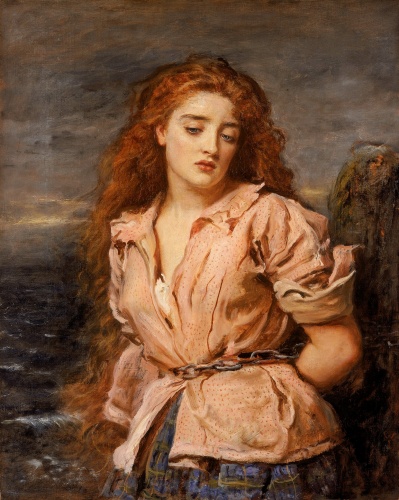 Martyr of the Solway, by Millais

Those who supported the Presbyterian view signed an oath, or Covenant, that expressed their independence from the Episcopalian system. This went far beyond being a simple religious dispute; the Covenanters' refusal to acknowledge the monarch as head of the church was interpreted as treason against the Crown. The conflict led to 'The Killing Time', when Covenanters were rounded up and executed on sight, without trial.

On 25 November 1684 the Privy Council introduced the Oath of Abjuration, which required everyone over the age of thirteen to swear allegiance to the monarch as the head of the Church. The Oath was aimed at catching the followers of Richard Cameron, a Covenanter who had publicly denounced King Charles II as a tyrant and declared war on the monarch.

When King Charles II died in February 1685, Scottish Covenanters hoped that religious persecution would ease. In the short term, at least, they were wrong. 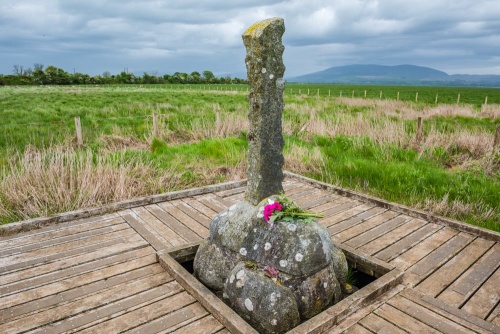 Who Were the Wigtown Martyrs?

Gilbert Wilson was a wealthy farmer at Glenvernoch, north of Newton Stewart. Wilson and his wife gave in to government demands and attended Episcopalian church services, but their children rebelled. Three sons escaped to Ireland, while their two daughters, Margaret and Agnes (aged 13), hid in the hills.

Gilbert Wilson was held legally responsible for his children's refusal to attend Episcopalian worship. He was heavily fined and had government soldiers billeted at his farm.

When King Charles II died, Agnes and Margaret Wilson came down from the hills. They may have sheltered briefly at the home of Margaret McLachlan at Drumjargan, near Kirkinner, before continuing into Wigtown. There they were betrayed to the authorities and all three women were captured and put in prison.

Later reports suggest that the three women knew each other before the Wilson sisters stayed with McLachlan, which makes sense as they shared similar religious beliefs. 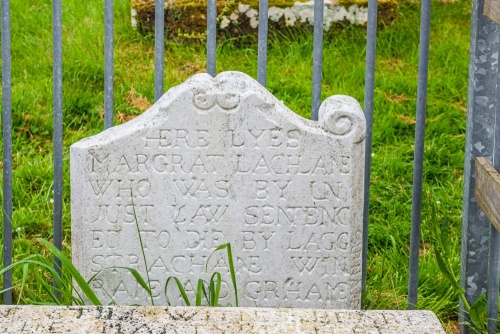 They were brought before a commission charged with administering the Oath, along with a fourth woman, Margaret Maxwell. One of the charges against the women was that they were present at the battles of Bothwell Brig (1679) and Airds Moss (1680), which seems an absurdity given how young the Wilsons would have been at the time.

Maxwell was found partly guilty and sentenced to a public flogging. The residents of Wigtown were apparently so angry at the sentence that they all withdrew indoors, so there were no witnesses to the 'public' flogging. As a result, the hangman who administered the flogging is said to have been particularly lenient.

Agnes Wilson was pardoned due to her youth, though her father had to pay a Â£100 fine, an enormous sum for the time.

The final two women, Margaret Wilson and Margaret McLachlan, refused to take the Oath of Abjuration and refused to kneel before the court to receive their sentences. It was no surprise, then, when they were found guilty and sentenced to be drowned. 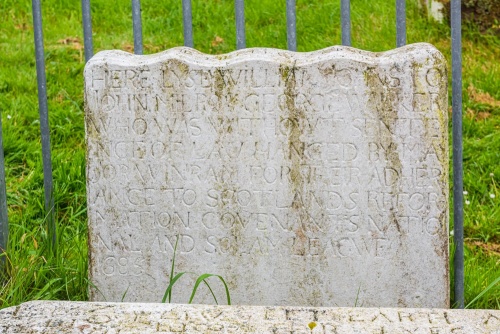 It seems likely that Gilbert Wilson rode to Edinburgh and appealed to the Privy Council for his daughter's release and for Margaret McLachlan to be pardoned due to her age. We know from the Privy Council records that the council agreed to quash the sentences and free both women.

What happened next is unclear. There is no proof that news of the Privy Council's decision ever reached Galloway. If it did, local authorities ignored it.

Execution of the Wigtown Martyrs

Both women were tied to stakes in the River Bladnoch, where it emptied into Wigtown Bay. The shoreline then is quite different from what it is now, and the river ran at the bottom of the hill, below the parish church (now the Old Kirk).

Margaret McLachlan was tied to a stake in deeper water. You can interpret this in two ways; either authorities wanted to make Margaret Wilson watch the older woman die, or, more mercifully, they hoped that the sight would make Wilson repent and take the Oath, thus saving her own life.

If that was their intent, they failed, for Wilson seemed to take heart from McLachlan's ordeal. She sang a verse from Psalm 25 and quoted a Biblical verse from the epistle to the Romans. Records show that when Wilson was asked if she would pray for the King, she replied that she prayed for the salvation of all and the damnation of none. Her watching relatives tried to insist that this meant she was willing to relent, but when she was asked if she would take the Oath of Abjuration, she refused.

Some accounts suggest that both women had their heads forced under the rising water, then their throats were cut, which might be interpreted as a small act of mercy, as it spared them a slow death from drowning. 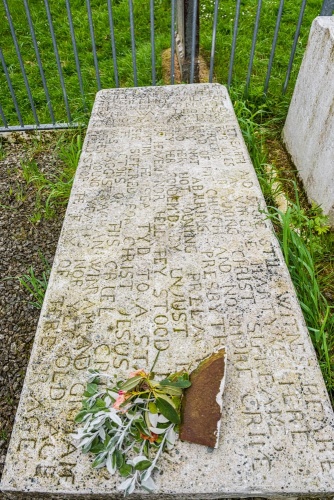 When the tide receded, the women's bodies were carried to the churchyard up the hill, where they were buried. Later in 1685, three Covenanting men, William Johnston, John Milroy, and George Walker, were hanged for similar offences.

A single inscribed table tomb to the three Covenanting men stands beside upright stones for Wilson and MacLachlan near the ruins of the Old Kirk in the burial ground of Wigtown Parish Church. All three memorials are enclosed by iron railings and there is an information panel attached to the railings to explain the sad history of the Wigtown Martyrs.

The gravestone to Margaret Wilson is inscribed thus:

Here lyes Margaret Wilson doughter to Gilbert Wilson
in Glenvernoch who was dround annno 1685 aged 18
Let earth and stone still witness beare
their lyes a virgine martyre here
murther’d for ouning christ supreame
head of His church and no more crime
but not abjuring presbytry
and her not owning prelacy
they her condem’d by unjust law
of heaven nor hell they stood no aw.
Within the sea ty’d to a stake
the actors of this cruel crime
was Lagg, Strachan, Winram, and Grahame
neither young yeares nor yet old age
could stop the fury of there rage.

Beside it is the gravestone of Margaret Lachlan, inscribed with these words:

Of the two women, Margaret Wilson became much more famous, no doubt due to her youth and her courage in the face of death.

Wilson was immortalised in a painting by the pre-Raphaelite artist John Everett Millais. The painting, entitled 'The Martyr of the Solway' but more commonly known as 'The Solway Martyr', painted in 1871. In it, Millais portrays Wilson as a romantic heroine, with flowing red hair, a typical pre-Raphaelite embellishment of history. The painting is held in the Walker Art Gallery in Liverpool. 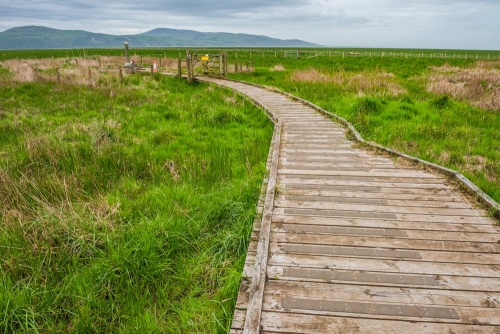 Boardwalk leading to the Martyrs' Stake

After their deaths, a timber stake was erected on the execution site. The rotting remains of the timber post were removed in 1937, to be replaced by a stone pillar which still stands.

To reach the Martyrs' Stake, take Bank Street past the parish church. The road descends a short but steep hill. At the bottom of the hill is a parking area and a footpath that leads into the marshy ground that verges on Wigtown Bay. A boardwalk leads into the marsh to the stone pillar that marks the execution site. 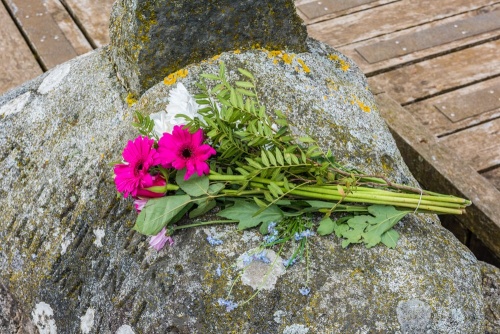 Flowers left on the Martyrs' Stake

There is a third memorial to the Wigtown Martyrs atop Windy Hill, immediately west of the town. This takes the form of a stone column, erected in 1858 and carved with the names of all those martyred in 1685.To reach the memorial from the High Street, take High Vennel north and turn left onto Jubilee Terrace. You will see a green sign pointing the way up a track to your left, towards the summit of the hill, where you will find the monument.

There is a final memorial to the Wigtown Martyrs, though not in Wigtown itself. A memorial to Margaret Wilson stands in the burial ground of the Church of the Holy Rude in Stirling.

It is a very short walk down Bank Street to the parish church. Go through the gap in the churchyard wall, past the ruins of the Old Kirk, and you will see the Martyrs' Grave ahead of you, protected by iron railings.

About Wigtown Martyrs Grave and Martyrs' Stake
Address: Wigtown, Galloway, Dumfries and Galloway, Scotland, DG8 9HS
Attraction Type: Historic Building
Location: The Martyrs' Grave is in the parish churchyard, while the Martyrs' Stake is at the end of a boardwalk leading into Wigtown Bay from the bottom of Bank Street hill.
Location map
OS: NX435555
Photo Credit: David Ross and Britain Express

More self catering near Wigtown Martyrs Grave and Martyrs' Stake

Self Catering near Wigtown