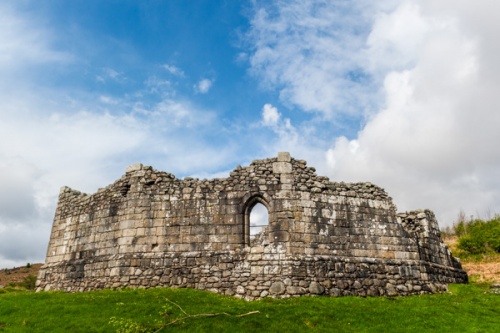 Loch Doon Castle may be the only transplanted historic site in Britain. This intriguing 13th-century fortification consists of an 11-sided curtain wall of great height. The entire castle used to stand on an island in the middle of Loch Doon, but it was disassembled and moved to its current location on the west shore of the loch when a hydro-electric project in the 1930s threatened to submerge its island home.

The fortress dates to the late 13th century and was built as a simple enclosure within high stone walls of coursed ashlar. Sometime in the first half of the 16th century, a keep was added inside the wall, and the entrance on the north wall was rebuilt to give better access to this keep.

The main gate was secured by a portcullis and the postern gate by a simple draw-bar across the opening. Within the curtain wall was a private apartment for the lord, a great hall, and several ancillary buildings for storage and accommodation.

The short answer is that we don't know, but the historical records offer a tantalising clue; in 1306 Sir Christopher Seton, brother-in-law of Robert the Bruce, sought refuge at Loch Doon after Bruce's army was defeated at the Battle of Methven.

When Seton came to Loch Doon the castle was controlled by a hereditary governor, Sir Gilbert de Carrick. The hereditary nature of the governorship suggests that the castle was built by an earlier Earl of Carrick, an ancestor of Bruce himself. 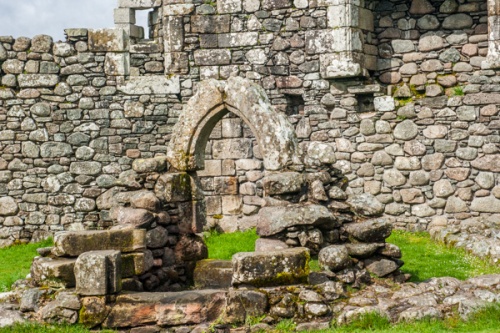 The odd arched opening - what was it used for?

In 1333 Loch Doon was one of only five castles in Scotland to uphold the cause of David Bruce to the Scottish throne following defeat at the Battle of Halidon Hill. The English besieged the castle in 1335 but the defenders were able to hold out.

Another unsuccessful attack came in 1510 when William Crawford of Lochmores tried to capture Loch Doon as part of an ongoing feud with the Kennedy family owners.

No one knows for certain when the castle passed out of use. One unconfirmed suggestion is that it was destroyed by fire during the reign of James V (1513-1542). One source suggests that the iron portcullis that used to defend the entrance is now at the bottom of the loch.

When the castle was moved to the shore, the 16th-century keep was left behind, so the current site consists almost entirely of the 14th-century wall, with remains of interior foundation walls.

In 1823 six dug-out canoes were discovered near the castle gate. One of the boats contained a Viking battle-axe, which can now be seen in the Kirkcudbright Museum, while two of the boats are in the Hunterian Museum in Glasgow. Historians have speculated that the canoes were used during construction of the castle.

One of the appealing things about Loch Doon is the location. As you travel south off the A713 the landscape becomes more bleak and forbidding, and by the time you reach the castle, it seems like you are a thousand miles from anywhere. The transplanted circular walls sit on a rocky outcrop above the road, looking down on the loch and a small car park for visitors.

There is one small plaque outside the castle and a large information panel inside the castle walls with a history of the site and an artist's impression of what it must have looked like when built. There is not a whole lot to see inside the castle, but there were several intriguing features. The most obvious is a low, arched opening in Gothic style. This has no obvious function and is a rather curious mystery.

High on the wall is a fireplace opening with very finely carved stonework. This may have heated the great hall. Within the curtain wall are the foundations of a 15th-century tower house for the lord. You can clearly make out the base of a spiral stair that gave access to higher floors of this building.

I should add that to access the castle interior you have to walk around the rear of the structure where the ground can be wet and muddy. I strongly suggest good waterproof footwear! 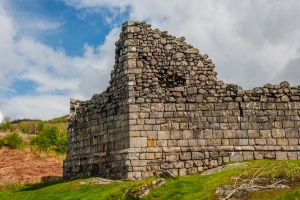 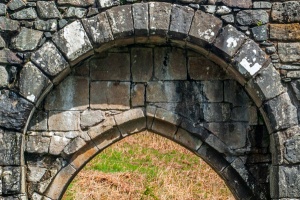 Interior of the main entrance 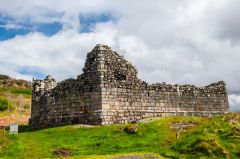 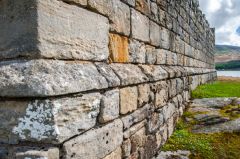 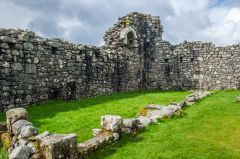 Nearby accommodation is calculated 'as the crow flies' from Loch Doon Castle. 'Nearest' may involve a long drive up and down glens or, if you are near the coast, may include a ferry ride! Please check the property map to make sure the location is right for you.