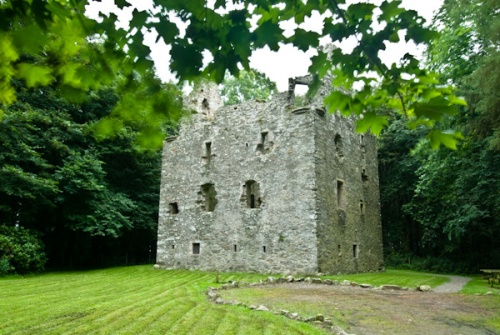 Sorbie Tower is a late 16th-century tower house hidden in a wooded area just off the B7052 between Garlieston and Sorbie village. Close beside the path to the Tower is an intriguing mound known as Sorbie Motte, which may have been a 12th century Pictish fort erected by the Vipont family.

The name itself tells you a lot about the location; 'sorbie' or 'sourby' means a house amid swamps, and the marshy ground probably acted as an extra layer of defence.

The Tower is built to a traditional L-plan, a standard style throughout Scotland from the 14th - 16th centuries, and was erected by the Hannays, a powerful family in Wigtownshire in the 16th century.

The style of Sorbie Tower, with its projecting corner turrets, suggests a date of construction 1550-1575. It stands 3 storeys high, with an attic above the main block. There is a vaulted kitchen on the bottom floor, with a huge fireplace fully 17 feet wide and 5 feet deep. The great hall occupies the first floor, and sleeping chambers were on the top floor.

The wing of the L rises a further storey higher than the main block and terminates in a small, gabled watch chamber. A stair turret is set in the angle of the L, as is common. Note the bottom corbel of the stair turret, which is carved to resemble a human head.

The Tower was originally called The Place of Sorbie, and may have been built by Alexander Hannay of Sorbie, who held the estate here from 1569 until his death in 1612. Sorbie was sold to Sir Patrick Agnew in 1626, and to the Stewarts of Garlies in 1677.

The final owner was Brigadier-General John Stewart, who died in 1748. After his death, the Tower was left to decay, which it did until the latter half of the 20th century. Hannay interest in Sorbie was galvanised by the creation of the Clan Hannay society in 1959, and since then the Clan has worked to preserve the site.

The tower is in a poor state of repair, with crumbling walls meaning that, as of this writing, the interior is unsafe to view. But you can get a good idea of the tower structure from the exterior, enough to appreciate what a substantial building it must have once been. 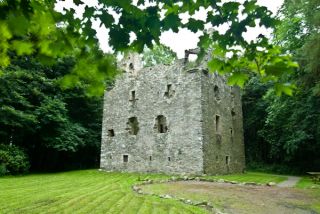 About Sorbie Tower
Address: B7052, Sorbie, Dumfries and Galloway, Scotland
Attraction Type: Castle
Location: Immediately north of the B7052 at Aggiston Bridge, one mile east of Sorbie village. There is a small parking area and a short walk through trees to the Tower.
Website: Sorbie Tower
Location map
Sorbie Tower Photos
OS: NX451470
Photo Credit: David Ross and Britain Express

More self catering near Sorbie Tower >>