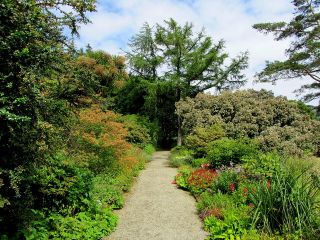 The garden location on the southern slope of a hillside looking towards the Sound of Jura benefits from the warming influence of the North Atlantic Drift, offering rare and tender plants from East Asia and South America a climate in which to thrive. There are tree ferns and palm trees to add a sense of the exotic.

Autumn colours are enhanced by tall larch trees which turn a golden yellow as the weather gets colder. Even in winter, the climate is temperate and shelter provided by evergreens makes Arduaine a welcoming place even in the middle of winter.

Highlights include displays of bluebells in spring, lush pink azaleas in summer, Chatham Island forget-me-nots, and quiet pools reached by winding paths. There are excellent views across the Sound of Jura from a cliff top viewpoint.

The gardens stand beside Loch Melford Hotel, which was originally Arduaine House.

Nearby accommodation is calculated 'as the crow flies' from Arduaine Garden. 'Nearest' may involve a long drive up and down glens or, if you are near the coast, may include a ferry ride! Please check the property map to make sure the location is right for you.

More self catering near Arduaine Garden >>