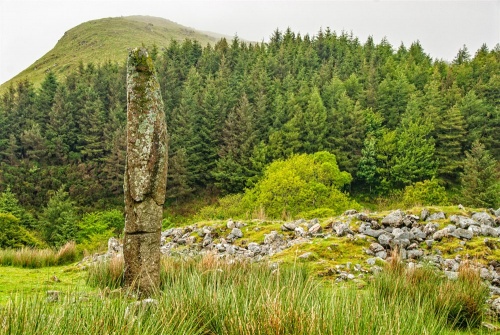 A complex of Bronze Age monuments stands at the head of Loch Craignure, immediately south of Kintraw and seven miles north of Kilmartin.

The most striking and immediately obvious feature of this complex is the Kintraw Standing Stone (sometimes known as the Ardfern Standing Stone), a slender monolith that stands 13 feet high and is 3'6" wide. The stone is thought to have been erected around 1800 BC.

The stone tapers towards its rounded top and there is a distinct notch cut into the southern edge at about 4'6" above the ground. It isn't clear what function this notch is meant to fulfil. 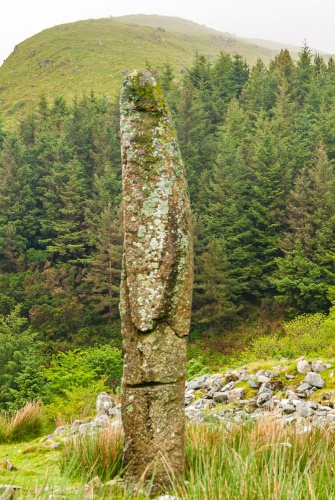 The stone stands amid the remains of at least three cairns, and a possible fourth has been identified. The cairns, identified as Cairn A, Cairn B, and Cairn C, were probably erected in the first half of the second millennium BC. Cairns A and B contain stone-lined cists, while Cairn C has never been investigated.

In the remains of Cairn A, the largest of the three cairns, was a recumbent monolith about 7'6" long. It is likely that this stone was never erected, as no socket hole has been discovered. Sadly, Cairn A has been robbed of many of its stones.

The Kintraw Standing Stone is traditionally said to mark the burial place of a Norse prince. For this reason, it is sometimes known as 'The Danish King's Grave'. The same name has been applied to Cairn A.

The standing stone fell over in 1979 and was re-erected and set into a concrete base.

Some researchers have suggested that the standing stone served an astronomical function, aligning with the sun setting over mountains on the Isle of Jura at the winter solstice. 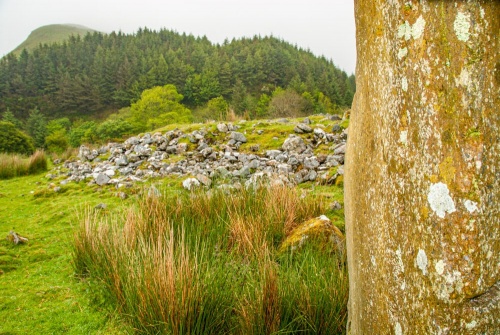 The standing stone and Cairn A

The Kintraw Standing Stone is incredibly easy to find. It stands directly beside the A816 immediately south of Kintraw hamlet and is visible in the middle of the field east of the road. There is no obvious place to park, but there are two widened areas on the verge, one on each side of the road, in front of modern farm gates.

If you park carefully in these wider areas you will be off the road, but please take care! We drove back and forth several times along this stretch of road, trying to work out where the safest place to park was, before we stopped to explore.

Nearby accommodation is calculated 'as the crow flies' from Kintraw Standing Stone. 'Nearest' may involve a long drive up and down glens or, if you are near the coast, may include a ferry ride! Please check the property map to make sure the location is right for you.