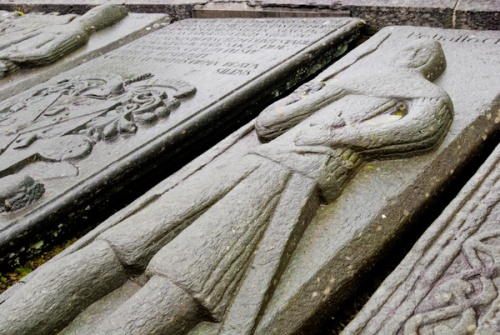 Gathered together at Kilmartin church are 80 sculpted stone grave slabs gathered from around the Kilmartin region. The earliest of the slabs dates to the 13th century, and the latest to 1712. Most of the stones (those thought to be most at risk from weathering) are protected under cover of a former mausoleum building at the rear of the churchyard. A few others still lie 'in situ' within the churchyard.

Many of the slabs carry similar carvings, including claymores and swords, often linked to interlaced foliage designs. Other symbols include animals and crosses, plus objects from daily life such as a comb and a set of shears. The latter symbol suggests that the deceased may have been a woman; the shears being a common symbol for domestic activity.

A popular yet unproven theory suggests that the Kilmartin carvings are linked in some way to the Knights Templar. This theory appears to be based on the style of swords carved on many of the slabs. The swords are much more likely to simply represent the social status of the deceased.

Many of the stones were the work of a group of sculptors working in the Loch Awe area through the 14th and 15th centuries. The carvers may have had a workshop at Kilmartin itself or in the surrounding area.

Included with the Kilmartin stones are several beautifully carved slabs from the Poltalloch Estate. The quality of the carvings is of the highest order, and the designs are similar to others in the West Highlands, such as Kilberry, Keills, and Kilmory Knap.

The two most important monuments at Kilmartin are not the grave slabs, however, but the so-called 'Kilmartin crosses', a pair of beautifully carved crosses, one dating from the 9th or 10th century, and the other of late medieval date. The Kilmartin Crosses have been moved inside the church for protection. The church is usually open from April - Sept. 9.30 am - 7.00 pm (except during services).

Just south down the glen are a profusion of prehistoric remains, including a linear cemetery, numerous standing stones, and several sites with cup and ring carved rocks. 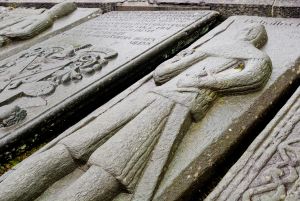 Nearby accommodation is calculated 'as the crow flies' from Kilmartin Sculptured Stones. 'Nearest' may involve a long drive up and down glens or, if you are near the coast, may include a ferry ride! Please check the property map to make sure the location is right for you. 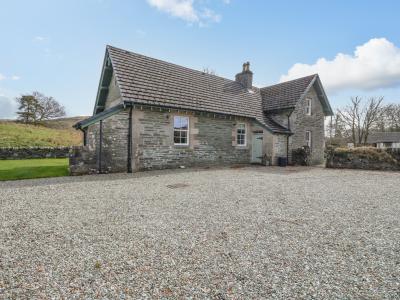 The School Room rests in Ford and can sleep two people in one bedroom.
Sleeps 2