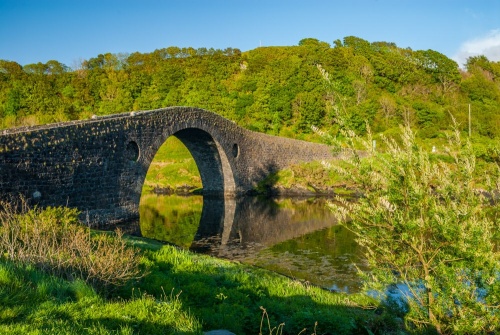 The Bridge over the Atlantic

Clachan Bridge, more popularly known as 'The Bridge over the Atlantic', carries the B844 road across Clachan Sound, linking the Scottish mainland and the island of Seil. The historic bridge was built in 1792 over a narrow strait of water that is directly connected to the Atlantic Ocean via the Firth of Lorn, hence its nickname.

Clachan Bridge is not the only Scottish bridge to be known as The Bridge over the Atlantic. The same nickname has been applied to Great Bernera Bridge, which links the Isle of Lewis to the island of Great Bernera. 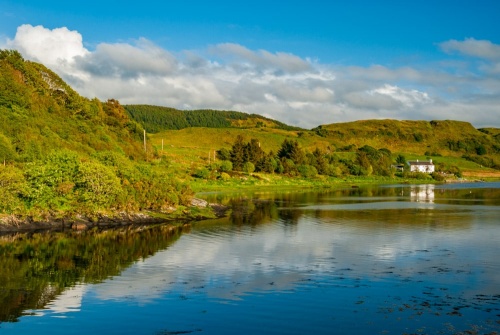 Clachan Sound from the bridge

In the late 18th century the island of Seil formed part of the vast Breadalbane Estate, owned by Lieutenant-General John Campbell, The Earl of Breadalbane and Holland. Crossing the tidal strait that separated the island from the mainland could only be done by boat, though at low tide the water level dropped to a mere trickle.

So narrow was the strait that in 1790 plans were mooted to fill it in, creating a land bridge. This idea was dismissed because the strait was frequently used by sailing boats.

After the plan to fill in the strait was rejected by the estate's chamberlain, a man named John Campbell of Lochend. Campbell instead asked an Oban contractor named John Stevenson to draw up a plan for a bridge. Despite tradition and the suggestions of later historians, there seems to be no evidence for any involvement by the famous Scottish architect and engineer, Thomas Telford. 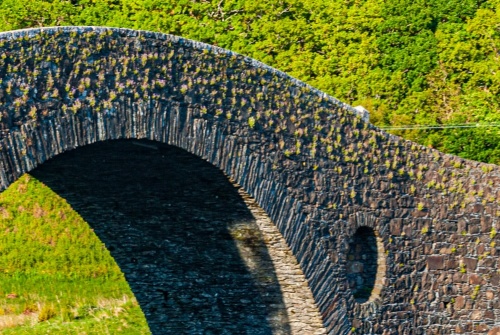 The bridge arch and circular recess

Stevenson's plans called for a two-arched bridge with a large span of 21.3m and a smaller second span of 6.1m. The larger span was high and wide enough to allow small vessels to pass beneath it. The estimated Â£450 cost of Stevenson's bridge was to be borne mainly by Lord Breadalbane, the Easdale Slate Company, and MacDougall of Ardencaple.

Lord Breadalbane suggested that the plans be checked by a professional architect, Robert Mylne, who made several alterations, including getting rid of the second arch and adding the two small recesses we see today on either side of the central arch.

The bridge was begun in 1791 and completed the following year. Unfortunately for Stevenson, he had badly underestimated the cost of the project, and lost a considerable amount of money. He received compensation from Lord Breadalbane for some of his loss in 1795. 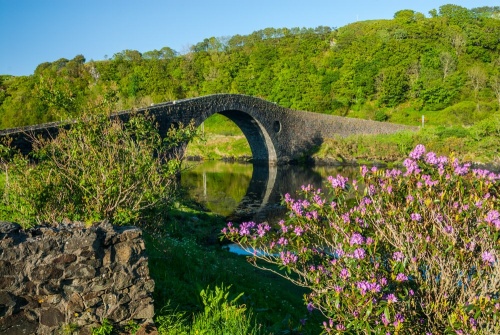 Clachan Bridge from the south-west

After Mylne's modifications, the finished bridge had a single span of 21m (72 feet) and rises 8.5m (27 feet) above the high-water mark. The roadway, measured between the bridge parapets, is 4.7m (15 feet). The bridge is built of rough boulder rubble. Including the arch and the approaches on both ends, the entire length of Clachan Bridge is roughly 300 feet.

The hump in the centre of the span was lowered in the 1980s to make it safer for longer vehicles such as lorries to make the crossing. The parapets were also raised so that sheep couldn't jump off the bridge! 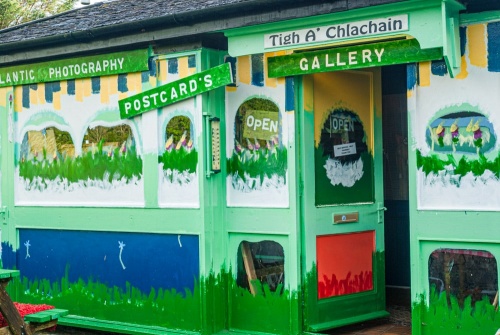 House of the Trousers

At the western (Seil) end of the bridge is the Tigh an Truish Inn, a popular place for a pint and a meal. The inn's name translates as 'The House of the Trousers', which may sound comical, but it is a reminder of a serious time in Scottish history.

In the aftermath of Bonnie Prince Charlie's Jacobite rebellion in 1745, the British government tried to break the influence of the clan system in Scotland and destroy traditional symbols of Gaelic culture. Among other measures, the wearing of kilts was banned. Islanders leaving Seil to work on the Scottish mainland would stop at the inn and change into trousers before crossing the strait. At the end of the working day they would stop here and change back into kilts.

Clachan Bridge is on the B844 about 8 miles south of Oban. From Oban take the A816 south, and turn off onto the B844 near Kilninver. Simply stay on the road as it skirts Loch Seil and reaches Clachan, on the mainland.

Go slowly over the bridge; it is narrow and the humpbacked centre of the arch makes it impossible to see traffic coming the other way. There is a large car park opposite the inn. It is signposted for use only by inn patrons, but if you're just going to stop for a moment to examine the bridge, you should be all right.

About Bridge over the Atlantic
Address: B844, Clachan Seil, Argyll, Argyll and Bute, Scotland, PA34 4QZ
Attraction Type: Historic Building - Bridge
Location: On the B844 at Clachan Seil (island of Seil) about 8 miles south of Oban. Parking on the western end of the bridge.
Website: Bridge over the Atlantic
Location map
OS: NM785197
Photo Credit: David Ross and Britain Express

Nearest Accommodation to Bridge over the Atlantic:

Nearby accommodation is calculated 'as the crow flies' from Bridge over the Atlantic. 'Nearest' may involve a long drive up and down glens or, if you are near the coast, may include a ferry ride! Please check the property map to make sure the location is right for you.

More self catering near Bridge over the Atlantic

More Hotels near Bridge over the Atlantic

More bed and breakfasts near Bridge over the Atlantic