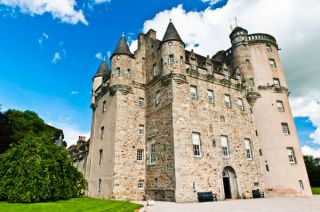 Castle Fraser is one of the finest stately homes in Scotland, built around a fortified tower house, and set in glorious countryside. The castle was begun in 1455 by Thomas Fraser, who called his fortified house the Castle of Muchil-in-Mar. In 1575 Michael Fraser of Stoneywood rebuilt the castle as a much larger Z-plan house.

So ambitious was Michael's building scheme that the house was not finished until 1636, under the watchful eye of John Bell, a master mason of no little repute, who also helped create Craigievar, Midmar, and Crathes castles. By that time Michael Fraser had died, to be succeeded by his son, Andrew, later named Lord Fraser by Charles I.

From 1814 Col Charles Mackenzie Fraser transformed the earlier tower house complex, remodelling almost all the interior rooms. But in the 20th century, new owners carefully removed the Colonel's 'improvements', returning the castle to its historic roots.

Unlike many similar castellated mansions in Grampian, Castle Fraser has never needed to use its defensive features, largely avoiding sieges and other such troublesome events. The chambers on view are small by the standards of later grand country houses but serve to give Castle Fraser a very homely, welcoming feel. The furnishings are interesting rather than opulent, and there are exhibitions on the long history of the family.

There is a very attractive walled garden to explore, and walking trails around the estate. We really enjoyed our visit; the castle is fascinating, and the setting is marvellous. There are 140 acres of grounds, with lovely woodland walks. 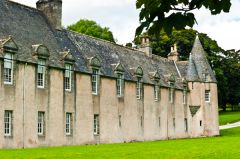 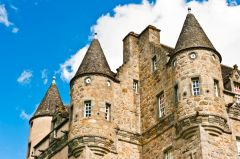 More self catering near Castle Fraser >>