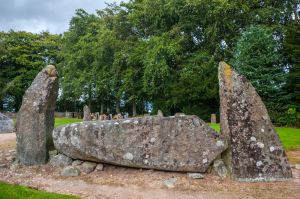 The combination of a modern churchyard and an ancient stone circle is a peculiar one. At Midmar the old and new cultures are brought together in rather startling fashion; immediately west of the church entrance is a recumbent stone circle, of a type found in numerous places around Aberdeenshire, probably erected in the 3rd millennium BCE.

Excavations reveal that there was once a cremation cairn at the centre of the circle, but this was destroyed, perhaps when the 'new' kirk was built beside the circle in 1787. The recumbent stone is quite large,  at 4.5 metres (about 14 feet long) and the pair of flanking stones appear to have been carefully selected to be the same size and shape.

Unlike most stone circles, the one at Midmar has been 'neatened', which is a polite way of saying that the stones have been replanted in the earth and the site made to represent what early 20th-century antiquarians thought it should look like. This tidying process removed traces of a burial cairn added to the circle after it erected.

One of the stones is almost certainly in the wrong order, for recumbent circle stones are usually 'graded' in height from the recumbent stone to the far side of the circle.

To ensure that the top surface of the recumbent stone is level, the base of the stone has been placed on small chocking stones. Each of the flanking stones stands 2.5 metres high, and are tapered to a curving peak so that they resemble nothing so much as a pair of canine teeth, or fangs.

Midmar Kirk is signposted off the B9119, two miles west of Echt. In the same area are two more stone circles at Sunhoney and Cullerlie. 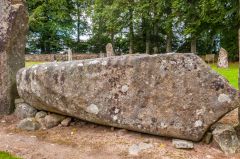 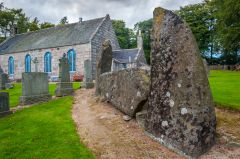