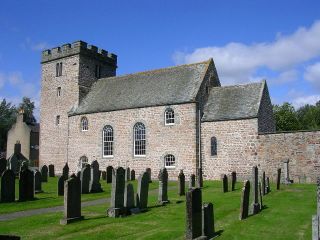 Monymusk Church
Monymusk Church is a fascinating late 12th-century building, possibly on the site of an earlier Celtic church. The church once served a community of Culdee priests. Within the church is a beautifully 9th century carved Pictish cross-slab.
History
The church was built to serve an Augustinian priory which stood nearby. The unusually long chancel suggests that the monks prayed there, leaving the nave for villagers. This might explain why there is a civil door in the tower and a priest's door into the chancel.

The priory was founded by the Culdee order and was served by a dozen clerics. In the early 12th century Queen Margaret reformed the Scottish church and the Culdee priory was re-established as an Augustinian priory with a Prior and 11 canons. The priory maintained a school, 3 gardens, croft land and pastures, as well as a range of monastic buildings.

By the end of the medieval period, the priory was split by internal disputes. A fire devastated the monastic buildings, and the canons were too poor to rebuild them. The priory lapsed, and the building sites were robbed for stone. The church, however, lived on to serve the local community.

One later addition paints a rather humorous picture of community life; in 1660 a doorway had to be inserted in the south wall so the minister could enter directly into his pulpit rather than having to dodge the dogs that accompanied their masters inside the church for services.

Malcom and MacBeth
There is a fascinating story linked to the early history of Monymusk church. According to legend, Malcolm III prayed here before meeting MacBeth at the Battle of Lumphanan in 1057. Malcolm swore that if he was victorious he would return and build a tower for the church. He used the tip of his spear to outline the tower site.

As history records, Malcolm defeated MacBeth at Lumphanan, and honoured his vow, building the Norman style tower which still stands today. The tower originally stood 74 feet high but was lowered to counteract a decaying wall. The top section was replaced by a spire, which in turn became unsound and the tower was lowered yet again to its current height of 51 feet.

Inside the church are several ancient carved stones, including a Class II Pictish symbol stone known as the Monymusk Stone. This is a 7-foot high slab of granite, carved with a Celtic cross above a step symbol and a traditional Pictish double-disc. The stone was found at Nether Mains Farm and later removed to Monymusk House where it stood in the billiard room, of all things. It was moved to the church in 1978. Even older are a pair of 6th century engraved burial stones.

The truncated chancel is thought to be only 1/3 of its original 12th-century length. At the west end, a Romanesque arch joins the nave and tower. Between the chancel and nave is another excellent Norman archway supported on moulded columns with 3 shafts and carved capitals.

About Monymusk Church
Address: The Square, Monymusk, Aberdeenshire, Scotland, AB51 7HJ
Attraction Type: Historic Church
Location: Monymusk is off the B993 on an unclassified road. The church is located in The Square, in the centre of the village.
Website: Monymusk Church
Location map
OS: NJ684151
Photo Credit: Richard Slessor, licensed for reuse under the Creative Commons Licence

More self catering near Monymusk Church >>