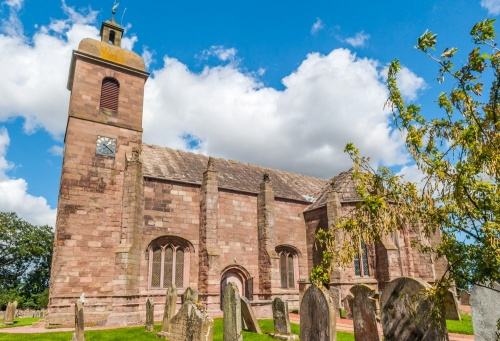 On a small rise overlooking the River Tweed north of Coldstream stands the 16th-century church of Ladykirk, the oldest church in Berwickshire still in regular use. The church probably stands on the site of an earlier medieval building.

The church, originally known as Our Lady Kirk of Steill, was begun around 1500 on the orders of James IV after he was saved from drowning in the Tweed near this spot. In 1496 James was returning from a siege of Norham Castle on the English side of the border when a flash flood swept him from his horse and into a deep pool known as a 'steill', used to net salmon.

Thankfully the king was hauled out of the pool before he could drown. James attributed his survival to intercession by the Virgin Mary and in gratitude, he ordered a church to be built, facing Norham and its castle on the Scottish side of the river.

He took a personal interest in the church and visited the site in 1501 to inspect the work. The cost was born by the royal treasury and expenses were recorded beside entries for Scottish royal palaces, another mark of how much the king valued his new church. 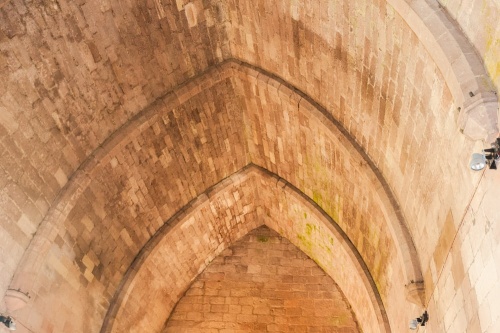 Ladykirk is thus the only surviving church built by a monarch. The monarch held the patronage of Ladykirk until 1895.

It is also the nearest Church of Scotland church to England - a matter of yards from the border. That made it a good place for diplomatic meetings between representatives of the Scottish and English governments. In 1551 Mary of Guise, the mother of Mary, Queen of Scots, summoned leading gentlemen of Duns, Selkirk and Jedburgh to meet here.

Eight years later in 1559 Ladykirk was the site where the last peace treaty between England and Scotland was agreed. This agreement was known as the Treaty of Upsettlington (Upsettlington being the old name of Ladykirk village) and was a supplement to the Treaty of Cateau Cambresis (which settled a 65-year struggle between France and Spain for control of Italy). The treaty documents were officially exchanged in St Cuthbert's Church in Norham.

From 1367 the East March - the eastern section of the England/Scotland border - was administered by officials known as Wardens, one English, one Scottish (though in practice both posts were often held by the same nobleman). Ladykirk church's proximity to the border made it a good place for the English and Scottish Wardens of the East March to meet.

The church may owe its existence to James IV but it owes its striking west tower to one of Scotland's great Georgian architects, William Adam. 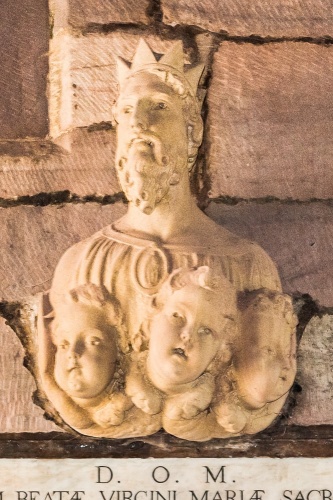 Bust of James IV on the nave wall

The church design is Scottish Gothic, the last flowering of Gothic style. It is laid out on a cruciform plan and built with stone quarried at Swinton, three miles away. It is 100 feet long and 23 feet wide. According to tradition if you were to walk around the perimeter of the foundations it would take exactly 365 steps; one for every day of the year.

The thick stone walls are supported by no less than 20 buttresses. Each buttress is topped by a pinnacle, many with carved faces as decoration. Inside the church, you can see ribbed vaulting, each rib corresponding to an exterior buttress. Ladykirk is unusual in that it is built entirely of stone, with no timbers for the roof, apparently in an attempt to minimise the risk of fire.

This was in response to James IV's decree that the church that 'neither fire nor flood could destroy'. Ladykirk is thus one of the very few churches in Scotland with a roof made completely of stone.

On the north wall of the nave is one of the church's treasures, a bust of King James IV. The bust commemorates the king's links to Ladykirk. It shows the crowned king supported by three cherubs. Beneath the bust is a dedication plaque in Latin, installed in 1743.

Also on the wall is a funeral hatchment to a member of the Marjoribanks family, and tucked into a corner is a beautifully carved parish chest bearing the date 1651. 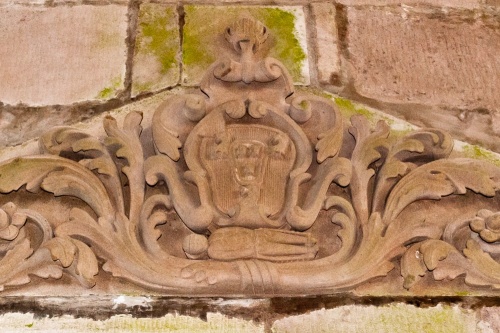 A heraldic crest on the nave wall

The church boasts some excellent Victorian stained glass. One window is a memorial to Professor John Dobie, a son of the Ladykirk minister, who died in a railway accident in 1894.

Between the church and the river is a field where James IV deployed his artillery to bombard Norham Castle across the river in 1496 and again in 1513. One of the gun platforms in the field is traditionally said to have been specially prepared for Mons Meg, the famous bombard given to the Scottish crown in 1449 by Philip the Good, Duke of Burgundy.

Ladykirk Church is extremely easy to reach. From Norham cross the River Tweed on the B6470, and turn right at the first crossing. This will take you into Ladykirk village from the west and you will the church ahead of you. There is space to park along the roadside. The church is usually open during daylight hours and was open when we visited. 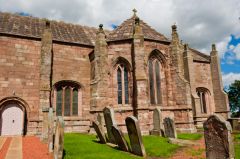 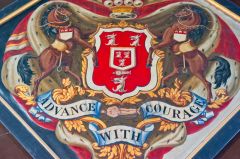 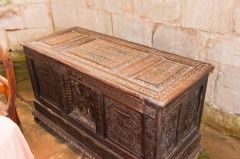 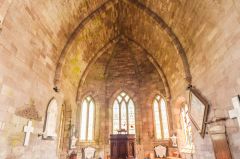 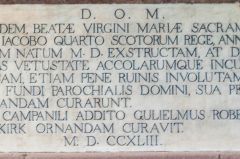 More self catering near Ladykirk Church

Self Catering near Ladykirk