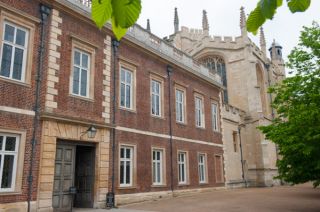 The famous public school founded in 1440 by Henry VI to provide scholars for King's College, Cambridge, which Henry established in the following year. To fund the school Henry gave it several holy relics and, perhaps more practically, large grants of land. The chapel is a wonderful example of Perpendicular Gothic style.

In 1440 Henry VI established a new school across the Thames from Windsor Castle, calling it 'The King's College of Our Lady of Eton besides Wyndsor'. From the start, Eton was a boarding school, for boys only, and it is one of only 4 public schools in Britain to continue this practice. There are 25 'houses' under a House Master.

The school was designed for 70 students, half of whom came from Winchester College, and all the students had their education paid for by the king. Etonians are known for their uniform of a black tailcoat, waistcoat, and striped trousers (and in earlier times, a top hat and cane). Eton has produced 19 Prime Ministers, among them Sir Robert Walpole, William Pitt the Elder, and William Gladstone.

Henry VI used Winchester College as the model for his new school. He brought the Headmaster of Winchester, William Waynflete, to Eton, along with several students, to start the Eton school. The king appointed a board of 'feoffees' to administer the school, drawn from members of the royal household, the church, and nobility.

The king intended the school buildings to unrivalled in Europe; the chapel was designed to extend for 18 bays, with the longest nave in Britain or on the Continent. He also obtained religious relics, including a piece of the True Cross.

Unfortunately, when Edward IV came to the throne in 1461 he took away many of Eton's grants and transferred the school's treasures to St George's Chapel at Windsor Castle. Construction on the school chapel stopped at just 8 bays, which is still quite impressive, though not nearly what Henry VI had in mind!

William Waynflete, who also founded Magdalen College in Oxford, added an ante-chapel to complete the building, which must stand as one of the best examples of Perpendicular style in England. Waynflete was responsible for the wall paintings in the chapel, and for building the north range that encloses School Yard, the heart of the College.

The gatehouse that fronts onto Eton High Street was added by Provost Roger Lupton from 1517. The last major addition to the College buildings was the library, added in 1725 by Thomas Rowland. Across the busy road stands School Hall, built as a memorial to Etonians who died in the Boer War.

The most famous quote about Eton was attributed to the Duke of Wellington, who is supposed to have remarked that 'The Battle of Waterloo was won on the playing fields of Eton'. Unfortunately, the Iron Duke never uttered the words attributed to him, and even the meaning has been warped over time. Wellington apparently saw a group of Eton schoolboys playing cricket and said 'There grows the stuff that won Waterloo", meaning the character gained by English youth from playing sports and games.

The College offers a seasonal programme of guided tours, usually from May to September. See the official College website for dates and times. If you'd just like to stroll past the College, you can get quite a good look at the major buildings and peek inside the courtyards even when the College is not open to visitors. I highly recommend a stroll over the Thames to Eton if you are visiting Windsor Castle. It takes no more than 20 minutes from Windsor Castle to the College, and on the way, you pass some fascinating historic sites in Eton village. 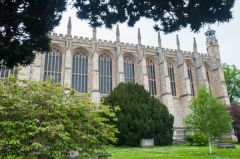 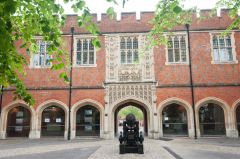 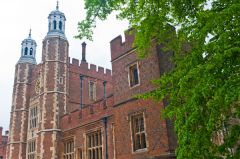 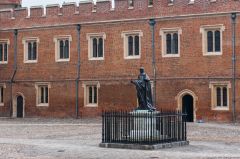 More self catering near Eton College >>