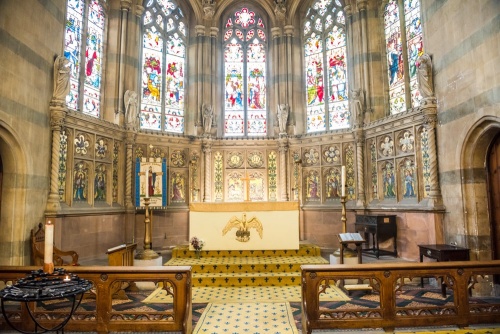 The striking tower of St John the Baptist Church looks down on its near neighbour, Windsor Guild Hall, from its location between Church Street and St Alban's Street, immediately south of Windsor Castle.

The building we see today dates to 1822 and replaces a medieval church that was probably founded in the early 12th century, shortly after King Henry I moved the royal court to New Windsor from its original site at Old Windsor, to the south east.

By the early 19th century that medieval building was in a very poor state of repair. Plans for a new building were drawn up by Charles Hollis, with input from Jeffrey Wyatt. The new building kept the medieval layout, and retained several burial vaults under the church floor. 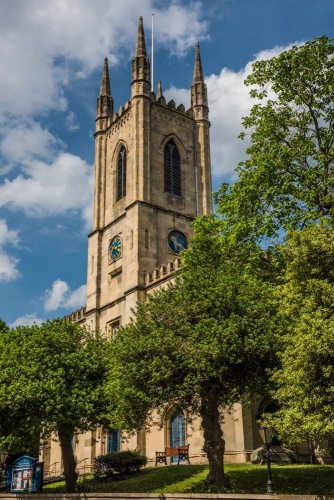 The church tower from High Street

Hollis designed the church in Gothic Revival style, though he took advantage of something the medieval Gothic architects did not have access to; cast-iron pillars and ribs to support a roof spanning 84' x 60'.

The church was extended in 1870 by SS Teulon in 1870 with the addition of a chancel and rounded apse. A later addition was the chancel screen, installed in 1898 to celebrate Queen Victoria's Jubilee. 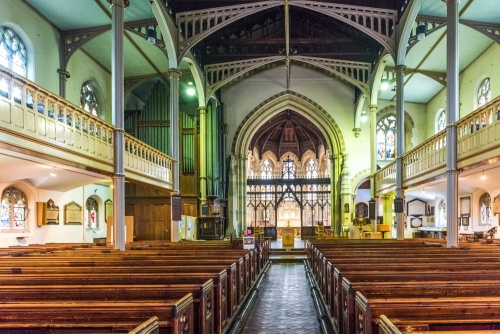 Many memorials from the medieval church were preserved and erected in the new building. Most of these can be seen lining the walls. One of the most striking memorials is on the right side of the porch as you enter. This is a bust crafted by the renowned sculptor Peeter Gaspar Scheemakers (1691-1781) and commemorates Topham Foote (d 1712).

Just inside the church door is a memorial to Alexander Baker (d 1685) and another to John Woodruff (d. 1728) who served as a mason to mason to Lord Weymouth. There are more wall tablets in the south aisle, including one to William Heberden (d 1845), royal physician to George III.

At the east end of the south aisle is a pair of old monuments protected behind glass panels. One memorial dates to 1509 and commemorates a Guardsman named Henry Biggs (d 1514), while the other is even earlier, dating to 1509 and erected in memory of Mayor Wyllima Canon and his wife Elizabeth. 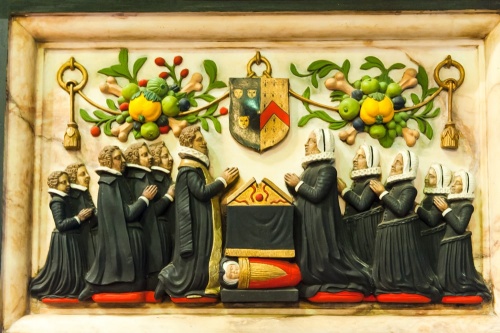 Perhaps the finest memorial in the church is low against the east wall of the aisle. This marble monument dates to 1605 and commemorates Edward and Eleanor Jobson and their 11 children, showing kneeling figures of the children flanking their parents, save for one figure of a baby lying beneath a prayer desk, a sign that it died in infancy.

Near the chancel screen is a 1580 hatchment to Richard Galis, MP and five times Mayor of Windsor. His son, also named Richard, was the host at the Garter Inn. It seems likely that William Shakespeare knew Galis Junior and used him as the inspiration for the landlord of the Garter Inn in his play, The Merry Wives of Windsor.

The apse is a delight, beautifully decorated with mosaics design by Antonio Salviati, who was responsible for the altar in Westminster Abbey. 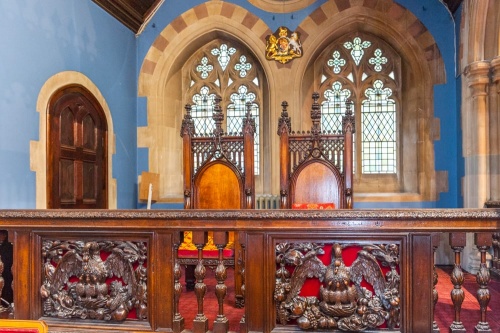 On the south side of the sanctuary, set apart by beautifully carved wooden rails, is the Royal Pew, also known as the Frogmore Pew. Within the pew, and looking rather like a pair of thrones, are two wooden high-backed chairs.

These were given by Princess Augusta, daughter of George III, who frequently worshipped at St John's when she lived at Frogmore House in nearby Great Park.

Other royals who regularly worshipped here include King George V and Queen Mary when they were still the Prince and Princess of Wales.

The Royal Pew is fronted by panels carved by Grinling Gibbons. These were a gift to the church of George III and came from St George's Chapel, Windsor Castle. 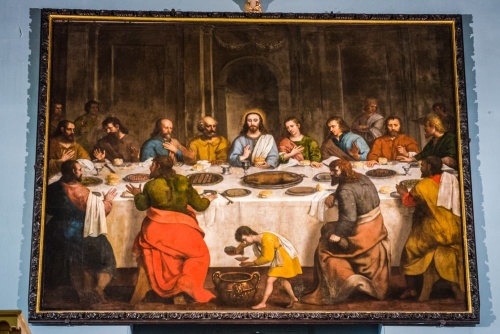 Look down the nave from the sanctuary and you will see a huge painting of the Last Supper high over the west entrance. The painting's provenance is not clear, but it is likely to be 17th-century work, possibly by Franz de Cleyn (d 1658), court painter to James I.

It hung above the altar in St George's Chapel and was given to the church by George III after renovations to the chapel in the early 19th century.

In the central aisle of the nave, you can see pews set aside for the Mayor, Alderman, and Councillors of the royal borough. In the mayor's pew is a cushion meant to support the mayor's ceremonial mace.

St John's is a wonderful historical building, especially worth visiting for its collection of monuments and its royal connections.

Getting there is very easy. The church fronts onto High Street, immediately south of Church Lane and a stone's throw from the Guild Hall and the castle.

It is normally open to visitors and has been open every time we visited.

Theoretically, there is limited parking along High Street, but this parking can fill up very quickly, especially on days that the castle is open. A much better solution if arriving by car is to use the park and ride service on Romney Lock Road. 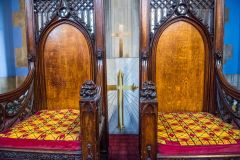 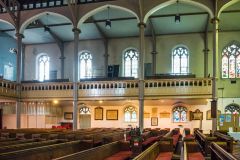 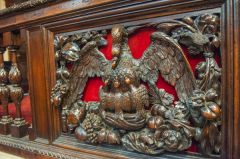 More self catering near Windsor, St John the Baptist Church