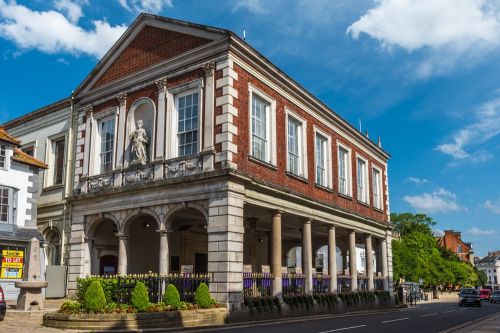 This attractive 17th-century building stands on Windsor's High Street, only a moment's stroll from the entrance to Windsor Castle. The Guildhall is often attributed to Sir Christopher Wren, but there is no proof that the architect of St Paul's Cathedral had anything to do with the Guildhall.

The confusion seems to arise from the fact that one of the statues that grace the east and west sides of the Guildhall was donated by Wren's son. It is a matter of debate whether Wren himself actually took a hand in the design, however.

Even more dubious is an oft-repeated tale about the columns that appear to support the overhanging first floor of the Guildhall. Tradition suggests that Wren designed the opening beneath the first floor to act as a market area. He supported the overhang with classical pillars at each corner. The borough councillors were frightened that the overhang might not be adequately supported, and they insisted that Wren insert additional columns under the roof. 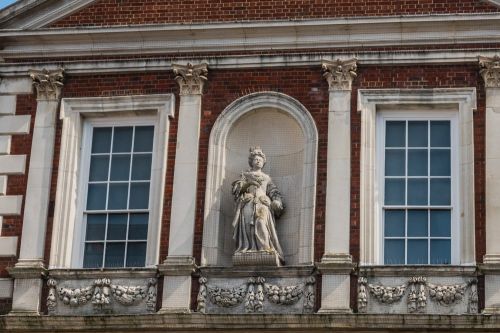 So far it is an amusing story, but unfortunately, it isn't true. Old photographs show that there were no columns under the roof in the mid-19th century, well over a century after Wren's death. It is far more likely that the columns stood at the rear of the Guildhall, and were simply moved to the front as a decorative feature when the building was extended in 1829.

Another oddity about the Guildhall is that it was never actually a meeting place for the town's guilds - that is, associations of local merchants. The guilds met at Trinity House, next to the Guildhall (now the Three Tuns pub).

The Guildhall served instead as a town hall; a location for civic ceremonies and a covered market. Throughout the late medieval period, there was a market in front of Windsor Castle, where the statue of Queen Victoria now stands. In 1592 the market was moved to a newly built market house north of the Guildhall site.

There it stayed until the town council had it torn down in 1687 when they had the Guildhall built. The plan was to create a meeting chamber on the first floor, with space for a covered corn market beneath.

The new Guildhall was begun in September 1687 to a design by Sir Thomas Fitz, or Fiddes, Surveyor of the Cinque Ports. Unfortunately, Fiddes died before the building was complete. Traditional history suggests that it was at this point that Sir Christopher Wren was called in to oversee the completion of the building, though as we've seen, there is some doubt as to whether Wren was involved. 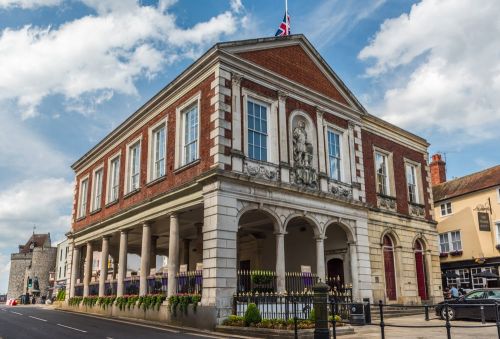 South facade of the Guildhall

Whoever the architect, the Guildhall was finished in 1689 and the market was moved under the cover of the new building, offering merchants and their customers a bit of protection from the weather!

The most obvious embellishments on the Guildhall are a pair of large statues on the north and south faces of the building. On the north is a figure of Queen Anne, given by the Corporation of Windsor in 1707, when the Queen was crowned. On the south side is her consort, Prince George of Denmark, given by Sir Christopher Wren's son. Under the statue is a Latin verse that translates as

'To the most serene Prince George, Prince of Denmark
an hero to be revered in every age.
Christopher Wren, Esq. erected this statue, 1713."

The Guildhall had a recent moment in the spotlight of history when Prince Charles and Camilla Parker-Bowles were married here on 8 April 2005. 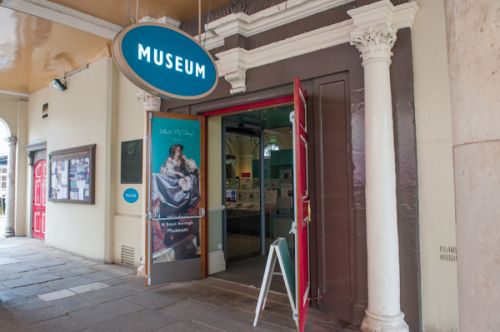 Many visitors use the Corn Market area as a handy viewing platform for watching the Guard and Band march by on their way to the daily Changing of the Guard ceremony at Windsor Castle. But even if there is no marching to see, you can still pop into the Windsor and Royal Borough Museum, which occupies the lower floor of the Guildhall. The upper floor is usually set aside to be let as a multi-function venue for weddings, meetings, and such.

Immediately to the north of the Guildhall is one of Windsor's quirky historical treats, a tiny timber-framed building known as The Crooked House of Windsor. You'll instantly know why it got its name as soon as you see it, for it leans at a truly remarkable angle - yet still manages to carry on as a popular tea shop! 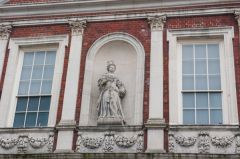 More self catering near Windsor Guildhall