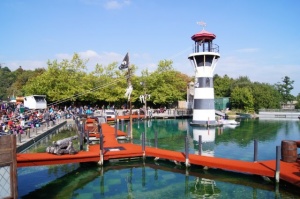 This giant theme park capitalises on the enduring popularity of the Lego block, a simple plastic block that has grown from humble beginnings as a child's toy to encompass a world-wide empire of enthusiast builders. Though much of Legoland is built with actual Lego blocks - millions of blocks! - there is much more to see and experience. There are over 50 rides and attractions, including Lego Racers, a Space Tower, The Rat Trap, and many more.

Special areas are devoted to Duplo, Lego's version for younger children. There are hands-on displays of building projects for the whole family, a miniature town, and Castleland, with the popular Dragon Coaster ride.

Miniland recreates some of the world's most recognizable landmarks in startling detail, from Big Ben to the Tower of London, all constructed using millions of individual Lego blocks. Miniland took 100 model makers three years to complete.

Children can earn their very own Lego Driving License and take to the wheel in an electric vehicle. Or rise above it all in a hot air balloon simulator. The Explorer's Institute takes visitors through a tropical rainforest and into the interior of a Pharaoh's Tomb in search of 7 magical keys.

Warning! Legoland is an extremely popular destination, resulting in occasional long lines and crowds, even during the off-season. In particular, accommodation in the area can be sparse, so please book ahead!

If you book ahead you can save quite a bit of money on entry and/or entry/accommodation packages.

More self catering near Legoland

More bed and breakfasts near Legoland