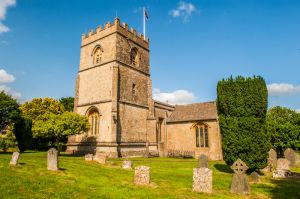 St Michael's and All Angels is primarily a Norman building, with a beautifully carved south door. Indeed, the door is one of the few remaining pieces of Norman architecture, for the church was heavily remodelled in the 13th and 15th centuries.

The church was built in the 12th century, but the only substantial remains from this period are a pair of Norman doorways. The chancel is late 12th century, and in the 15th century the west tower was added and the nave raised. A burgeoning population in the 19th century meant that the church needed to be expanded, and in 1820 a north transept was added, followed by a south transept in 1844.

The chancel is Early English, with lancet windows and a priest's door. The west tower is from the 15th century and is a good example of Perpendicular style. The octagonal font is also 15th century.

The most impressive features are the north and south doorways, both early Norman. The north doorway is blocked, but you can still see the chevron decoration and billet and star carvings. The main south doorway is a very impressive piece of Norman architecture. It is not in its original position but has been moved to its present location in the south transept.

There are three orders of moulding, carved with chevrons and roll mouldings. The tympanum over the doorway is a more recent addition.

The embattled tower rises in 3 stages, separated by string courses. There is an Early English priest's door into the chancel.

Inside the church is a 15th-century octagonal font decorated with quatrefoils. The pulpit is a relatively recent addition, made of Caen stone in the 20th century, but standing atop a 15th-century base. There is a George III royal coat of arms above the south door.

Don't miss a wooden plaque behind the altar, dated 1601 and depicting Christ carrying the cross. The nave roof spans 3 bays and has some original 15th-century timbers. Look for the boss carved with a bearded man. On the south wall of the chancel is a brass memorial plaque dated 1712, and in the nave is a marble tablet to Lieutenant Wenman Wynnialt, who drowned in 1842.

One of the most intriguing features is a tiny Saxon sarcophagus sitting on the steps of the west tower, obviously intended for a very young child. This is probably the smallest Saxon stone coffin in England and I dare you to see it without feeling a tiny lump in your throat! The sarcophagus remarkably retains its original lead lining.

In the churchyard is the base of a medieval stone cross shaft. There is also a pair of 18th-century tombs.

St Michael's is a beautiful country church in an idyllic setting in one of the Cotswold's prettiest villages. 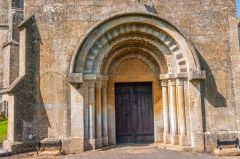 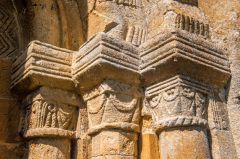 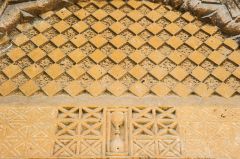 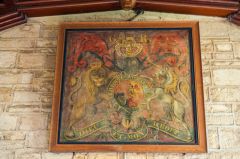