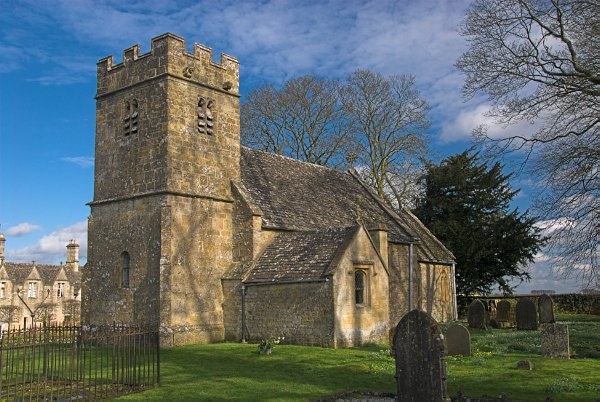 Photo Tour of All Saints, Salperton >>

All Saints is worth visiting for two main reasons. The first is the situation of the church; it stands within the grounds of Salperton Park, immediately beside the largely Jacobean manor house. There is no other building nearby; certainly, no evidence of Salperton village is immediately apparent, whose inhabitants would view this as their parish church. 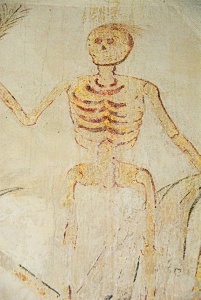 The second, and most compelling reason, is the superb wall painting on the south-west tower arch. The painting depicts a skeleton grasping an arrow in its right hand and standing on a coffin. There is a scythe at its feet, which suggests that this may be an early depiction of Father Time.

As for the rest of the church, the architecture is very simple. The chancel arch and two windows in the north wall of the chancel are Norman. Most of the remainder is 14th century. The church was begun around the year 1120, and the chancel dates from that time.

It was originally in the possession of the monks of Lire, Normandy, but later passed to the priory of Studley Prior, Warwickshire. In the tower is a sepulchral stone bearing a foliated cross. This probably dates to 1300, or earlier.

The north porch was added in the 15th century, and it contains its original stone benches and an empty niche meant to house a statue. The arch over the door terminates in carved stops. One depicts a woman's head, the other a knight in a bascinet helmet of a style in use around the year 1400. In the churchyard are a pair of 17th-century table tombs.

The narrow drive leads straight towards the manor on top of the hill, then bends to the right. Follow the road around until you come to a cattle grid. There is a gated lane to the left which allows access to the church. This could be better signposted, as it is not immediately obvious that the lane is not private access to the manor. There is a small parking area near the church.

More self catering near Salperton

More bed and breakfasts near Salperton